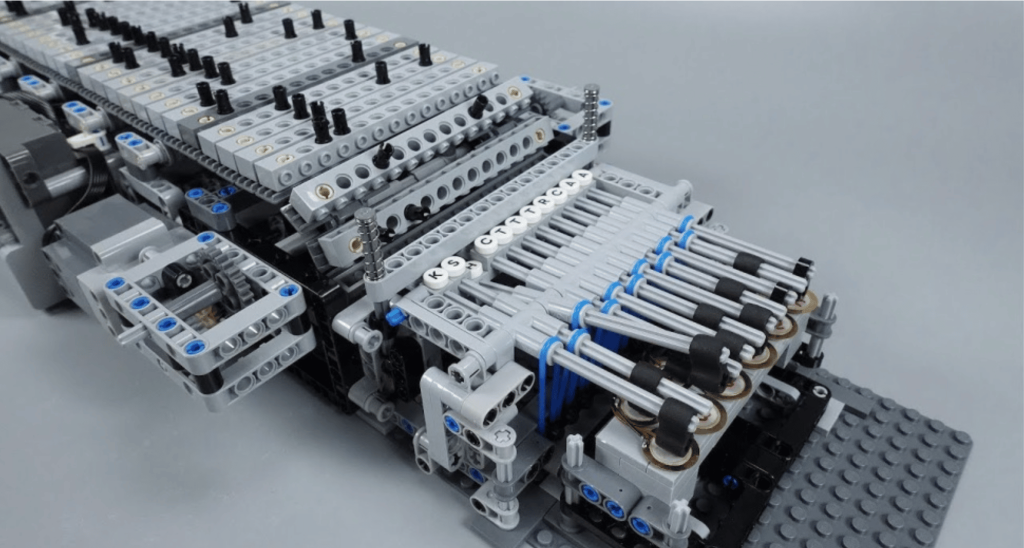 YouTube creator Brick Technology has made a drum machine crafted entirely out of Lego Technic pieces.

The fully operational drum sequencer, which draws from a Roland TD-9 drum module and drumming production software (Toontrack’s Superior Drummer 3), uses Lego pegs to mechanically hit piezo pickups that trigger the drum sounds. You can then alter the patterns by swapping out the pins into the different holes on the belt.

Check out the creation via a video below, which features a ‘Guess The Song’ game with well-known drum patterns faithfully recreated by the machine, including Blur’s ‘Song 2’ and Taylor Swift’s ‘Shake It Off’.

Brick Technology is a Lego Technic maestro known for building intricate structures including a wind-powered Lego train, a tank that shoots playing cards, and a ‘modern’ version of the Flinstones remote control car.

Last year, we saw artist Adnan Lotia create a number of Lego replicas of various famous album artworks by the likes of The Prodigy, Daft Punk, Gorillaz, and Aphex Twin. He first found inspiration for his project from listening to Pink Floyd‘s classic album ‘Dark Side Of The Moon’, when he started to think about how he could recreate the prism on the famous album cover with Lego bricks.

We’ve also seen a fully functioning set of DJ decks made of Lego by inventor and musician Look Mum No Computer, who you may remember as the creator of the organ made of Furbies, is behind the design. Apart from circuit board and mixer, the DJ set-up is made 100% out of Lego and is, remarkably, totally operational. It even has two Lego slipmats.