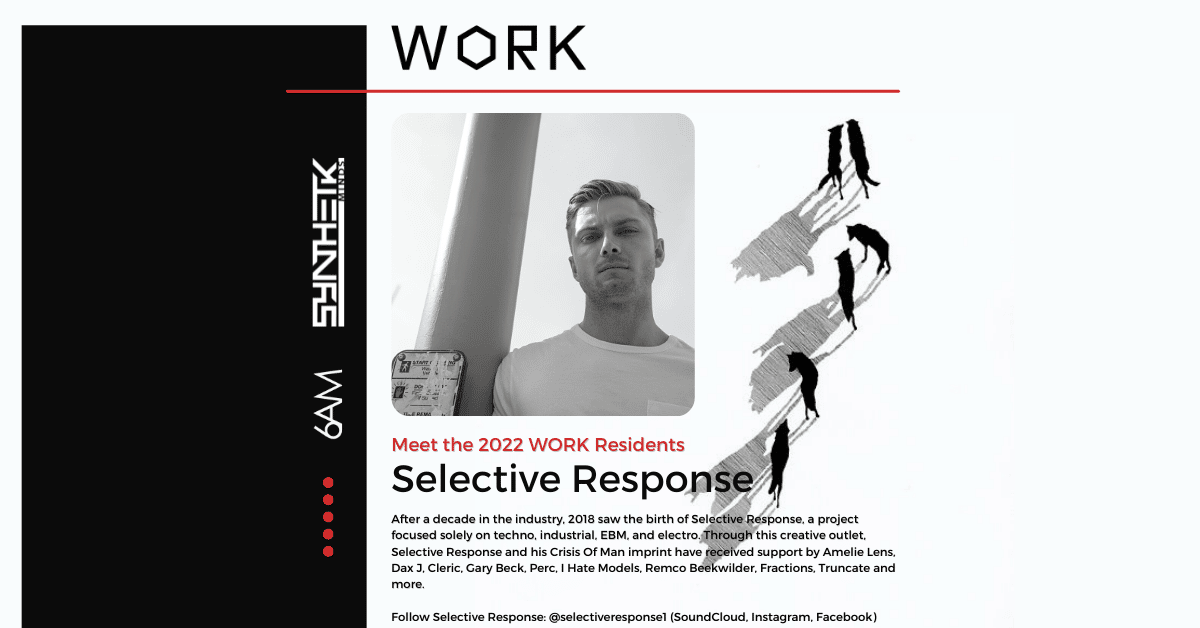 After a decade in the industry, 2018 saw the birth of Selective Response, a project solely focused on Techno, EBM, Industrial, and electro. With his Crisis of Man label he has received support from such heavyweights as Dax J, Rebekah, I Hate Models, Perc, Cleric, Amelie Lens, and many more. Selective Response has also recently joined the WORK Residents in 2022 and talks to 6AM about his project and views on music.

Thanks for having me. My 2022 is off to an amazing start. First off, the gig with IHM and the Singularity boys was insane. Then just got back from Europe working on music and seeing friends. Now I’ve got a bunch of work I’m amped to finish.

2021 is over and done with, what were some of your big takeaways from the year?

I actually had a pretty amazing year. There were some hard lessons learned, but I would say the biggest was to trust my gut feeling. I ignored it and paid the price, but fortunately, I’m able to walk away still intact.

Your style of music is a hard high-energy style of techno, what drew you to this?

I originally came from a hardcore and metal background, so the raw energy is something I’ve felt inside and had forever. Some people think the music is angry or too dark, but ironically, I’m actually a very positive person. I had a conversation with someone once and we both came to the conclusion that making music like this is our way of relinquishing the feelings instead of dwelling on them. There’s a sort of animalistic frequency you tap into when you make this kind of stuff.

Who were some of your biggest influences as you were developing as an artist?

This should come as no surprise, but definitely Perc and Dax J. I’ve been fortunate enough to become friends with them and since meeting them they’ve become my mentors. Not officially, but they’ve helped guide me and change my ways of thinking about my work in terms of approach and desired outcome.

“I had a conversation with someone once and we both came to the conclusion that by making music like this, it’s our way of relinquishing the feelings instead of dwelling on them.”

Selective Response on his expression through dark aggressive music

You’re part of the newly launched WORK Residency Program and as part of it, you played alongside I Hate Models. What does it mean to you to be invited to be a part of it and recognized as a standout talent?

It’s an honor. I’ve been doing this for nearly 12 years now and have been through all sorts of changes since I started. So to finally be recognized for my work in this way is both energizing and relieving. As for playing with IHM specifically, he’s a very good friend, and being able to share special moments with your friends makes that moment even better.

Why do you think the WORK Residency program is an important initiative?

It’s important because there are a handful of artists from LA who are starting to make big waves not just in the local scene, but globally, and to bring everyone together to help shape the sound and scene here is of utmost importance. We’re all friends, and like I said earlier, being able to work and share important and special moments makes them even better. 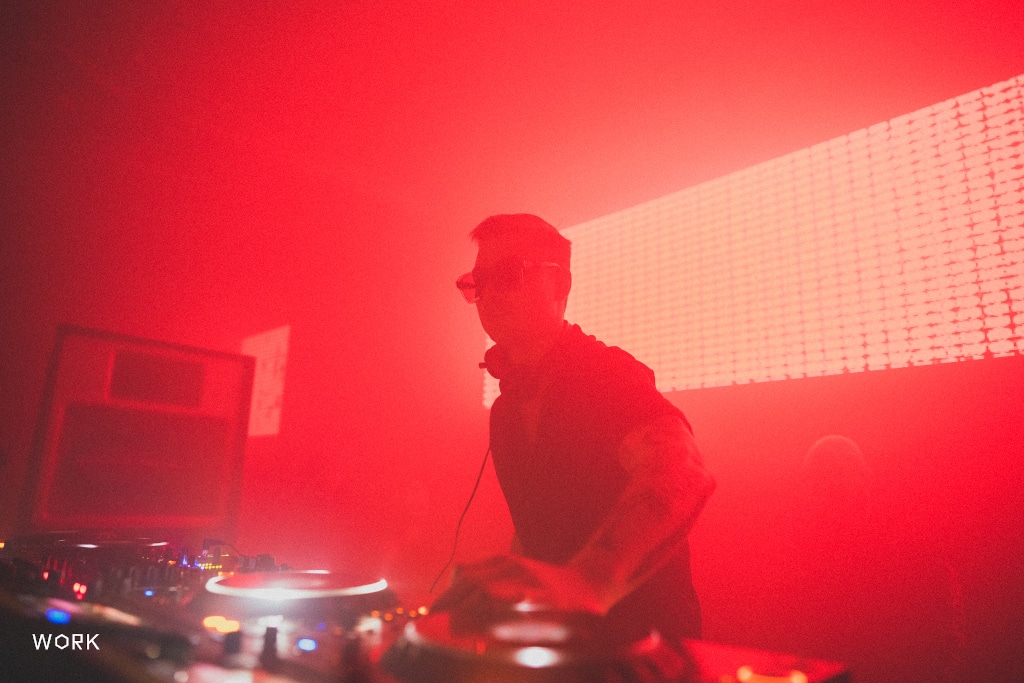 On many of your profiles you write “Rules have run techno”, can you elaborate more on that?

Techno was originally a rebellious act. It was sort of the counter culture. It’s amazing to see what it’s become since it was created, but there are too many instances over the past couple of decades where this futuristic and forward-thinking movement was trapped because people said it had to be a certain way. We’re all guilty of thinking our way is correct, but it’s important to realize that this music was meant to be whatever YOU want it to be, not what someone or some brand says it is.

From your perspective why is it important to break these rules and how do you feel you’ve done that with your artistry?

If you take a step back, art is about self-expression, and adhering to rules, when not done for creative exercise purposes, limits one’s self to fully being themselves. For me personally, I’ve always made the music I want to make which has made things more difficult as my music hardly seems to “fit perfectly” with others.

This is the reason I started my own label. I’d had quite a bit of success with tracks being played by others, but when I’d ask if they wanted to sign it, it was always the same answer which is that it didn’t quite fit the rest of the label. It’s frustrating, but I’ve always done things my own way, so it just seemed like I’d have to keep doing that.

Selective Response view on the ethos of technos origins

This year my label Crisis Of Man is going to be bringing on loads of new talent, with a few releases from some of my absolute favorite artists, and the level of quality is going to be amazing. We’ve got a VA coming out Feb 18th with all local underground talent and it fires me up every time I listen to it.

A massive thank you again to you and the team for believing in me and my work and taking the chance to bring me on board. This is going to be a very special year and I’m so excited to watch all the hard work we’ve all put in come to fruition like never before.