Win 2 Tickets to Innervisions’ Debut in NYC at The Brooklyn Mirage on Saturday, August 4 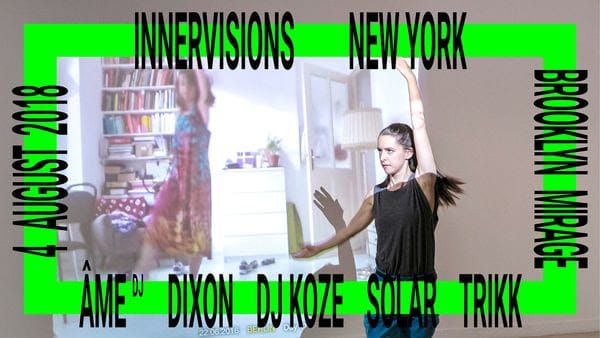 Win 2 Tickets to Innervisions’ Debut in NYC at The Brooklyn Mirage on Saturday, August 4

In a rare trip to North America and its first ever showcase in New York City, world-renowned underground label Innervisions will land at The Brooklyn Mirage on Saturday, August 4 from 6pm-4:30am. The late summer event will see Innervisions co-creators Dixon and Kristian Beyer of Âme go back-to-back for an extended set as they take over the sprawling outdoor oasis alongside DJ Koze, who will make a rare US appearance, as well as Solar and Trikk. With Innervisions showcases far and few between at global dance music events like Amsterdam Dance Event, The BPM Festival and Sónar Barcelona, New York City is in for an exceptional evening of dance music this August.

Founded in 2005 by visionaries Dixon (Steffen Berkhahn) and Âme (Frank Wiedemann and Kristian Beyer), Berlin-based label Innervisions has become one of the most influential voices in underground dance music over its thirteen year history. Only releasing a handful of records per year, the label’s in-house talents, which include Âme, Dixon, Henrik Schwarz, and Marcus Worgull, have taken Innervisions to global tastemaking status while maintaining a strict A&R policy. Handpicking releases from the likes of Laurent Garnier, Lee Burridge, Matthew Dekay, Recondite and more, Innervisions continues to offer refreshing and groundbreaking originals, including the June 2018 release of Âme’s debut album ‘Dream House’, a project three years in the making.

Innervisions labelhead Dixon, the Berlin-based house prodigy known for dominating Resident Advisor’s former ‘DJ of The Year’ poll and the impending launch of his very own fashion label Together We Dance Alone, will make a special NYC appearance at the event. He will be joined by Kristian Beyer of Âme, who is still riding high off the success of the deep, emotive ‘Dream House,’ for a special back-to-back DJ set that will take the audience on a musical journey as they discover new, old and everything in between. Also joining the lineup is DJ Koze, who is fresh off his critically acclaimed 2018 album ‘Knock Knock’, which Pitchfork described as “an essential [listening] experience.” Having recently collaborated with high profile artists like Róisín Murphy, José González, and Kurt Wagner of Lambchop on the album, the Pampa Records labelhead is in high demand as he touches down for his first US show of the year. Rounding out the bill are rapidly rising Portuguese producer Trikk, with the show marking his first performance to ever take place in the US, and San Francisco-based beatmaker Solar, a longtime friend of the label.

As the only North American Innervisions showcase announced this year so far, the stellar roster of talent is far from the only thing in store for attendees this August. Along with the lineup comes the immersive production that Innervisions is known for — a seasoned, meticulously crafted style that comes with over a decade of growing the label. Legends Âme and Dixon will also come together for a rare back-to-back performance, presenting one of the only North American opportunities of the year to catch the two side by side. Exclusive Innervisions merchandise will also be for available for purchase at the event.

Located in the industrial enclave of East Williamsburg, the multi-level outdoor complex features a large dancefloor peppered with towering palm trees as well as local food trucks and several bars on-site catering to revellers. With state of the art KV2 sound, mesmerizing 3D video projection mapping, vibrant lighting and multiple viewing platforms that encircle the enormous space four stories above the dance floor, The Brooklyn Mirage is the perfect landing pad for Innervisions this August.

Advance tickets are available at Resident Advisor while supplies last, but we are also giving away a pair of GA tickets to a lucky 6AM reader. To enter, simply follow the instructions in the widget below.