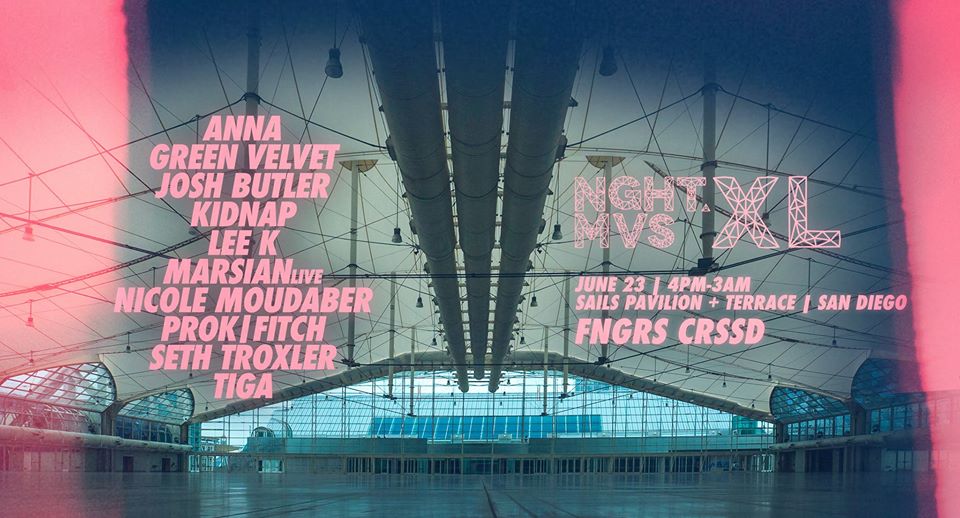 San Diego’s FNGRS CRSSD goes from day to night, and from outdoors to indoors for the massively stacked NGHT MVS XL scheduled for June 23rd at the Sails Pavilion and Terrace.

The event, which is scheduled to go until 3am will take place at the San Diego Convention Center, and features a who’s who lineup filled with hot names, legends and talented newcomers alike.

Chicago legend Green Velvet is joined by nearby Kalamazoo’s Seth Troxler (via Detroit, of course), as well as Brazilian lady of the moment ANNA, the always-popular Nicole Moudaber, the eclectic Tiga and the recently-launched Marsian Live project, that sees Octopus Recordings’ Sian team up with Items & Things boss Marc Houle.

And if the above wasn’t enough, attendees will also be able to enjoy sets by German duo Prok & Fitch, rising star Josh Butler, Kidnap and, of course, San Diego’s own Lee K. All in all this makes for a diverse and exciting roster of talent which, no doubt, will put on their best performances for the San Diego crowd and visitors flocking to the SoCal city for the event.

Tickets are available via Eventbrite, and we have also teamed up with FNGRS CRSSD to give you a chance to win 2 GA spots for this one-day 21+ event, which will see artists perform across two stages from 4pm until close.