Why The U.S.’ Zero-Tolerance Drug Policy Was Never Going To Work 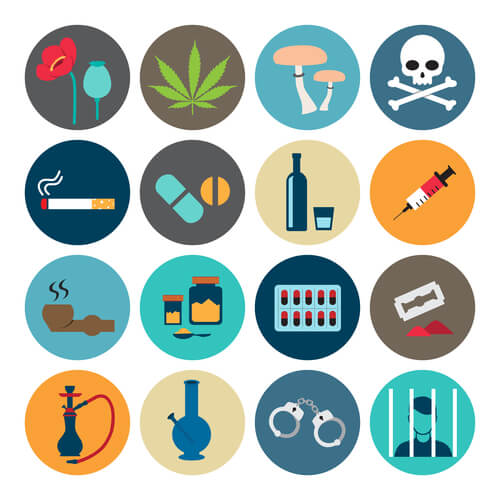 Why The U.S.’ Zero-Tolerance Drug Policy Was Never Going To Work

The Failing War on Drugs

During the 1960’s, “Hippies” and celebrities popularized the use of marijuana, LSD, and other drugs. “During the Civil War, troops used morphine, uppers dominated World War II, the Vietnam troops shot heroin”, and their addictions didn’t stop there, as the U.S.’ demand for drugs kept on growing.

The term “War on Drugs” was coined in the summer of 1971 after Ronald Reagan ordered law-enforcement officials to directly target drug consumers rather than producers or suppliers.

The assumption was that strict enforcement and punishment would reduce personal drug use and, consequently, demand.

In the coming decades, the War on Drugs would continue to grow worse in effectiveness through lack of education and enforcing zero-tolerance and abstinence policies in schools, criminalization of drugs resulting in an increase in incarceration rates, and lack of addiction treatment and therapy leading to thousands of deaths that could have been prevented through other methods.

Instead, from the 80’s and into the present day, we have seen the existing drug-culture being wrongly attributed to raves and dance music culture. Although it would be incorrect to neglect that there is truth in this, it would be foolish to overlook the real culprits and the broader situation at hand. 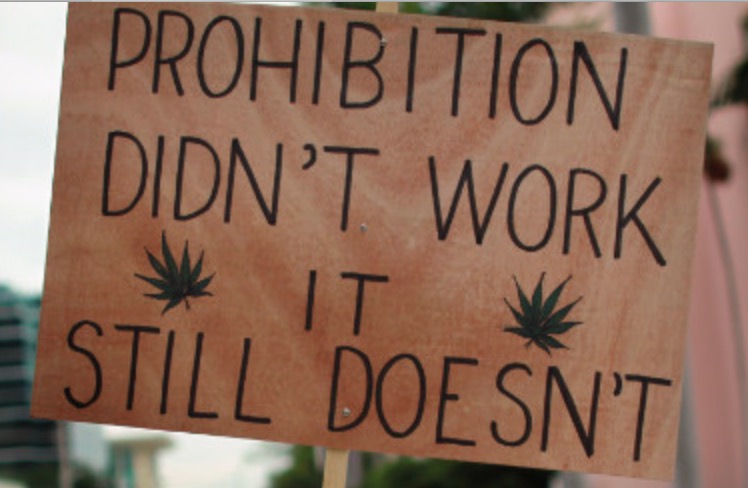 You’re at a festival and you ingest something a friend gave you. Cool, but you suddenly start to feel uneasy and sick.

You think, “I’ll be fine, a friend provided this”, but it finally dawns on you that you might’ve had too much or, worse yet, not what you intended to take. Next thing you know your world goes black.

You wake up in the hospital.

These type of occurrences happen more often than they should. Yet, the legal and political environment in our society does not allow for an open and honest discussion about the negative impact zero-tolerance policies pertaining to drugs can actually have.

In the United States these zero-tolerance policies usually begin in elementary school where 80% of school districts across the country advocate and run Drug Abuse Resistance Education, better known as D.A.R.E — a school-based drug education program that informs students from kindergarten to 12th grade about drug use, its consequences, and pushes them to “Just Say No”, all the while failing tremendously to talk about key and vital preventative measures. 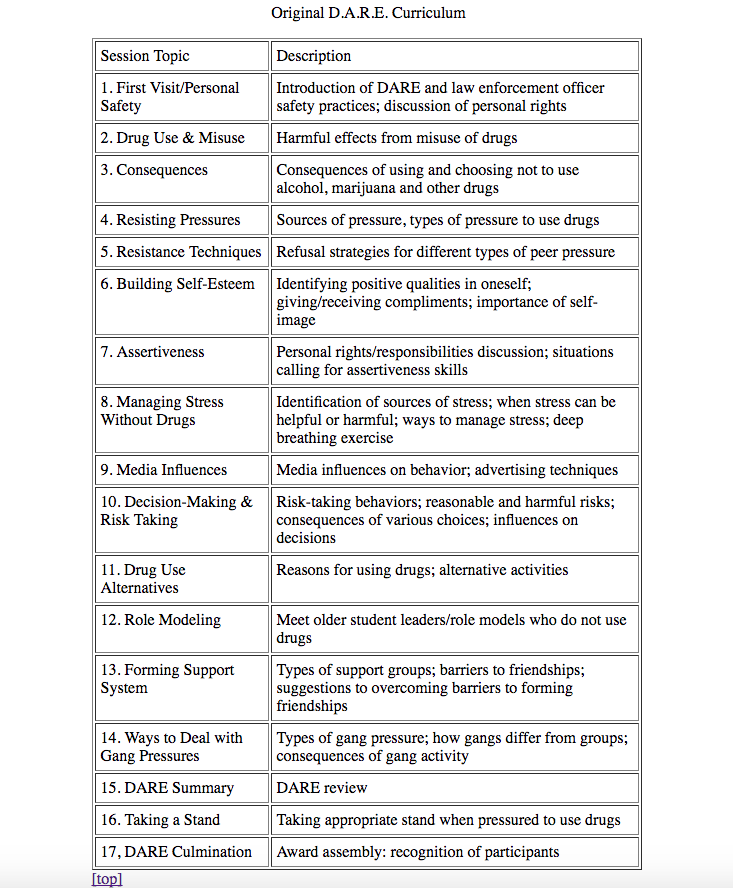 In fact, studies clearly point to the fact that D.A.R.E. is a failing education program with 48.3% of 12th graders surveyed reported using an illicit drug during 2016.

Furthermore, because of the entire idealization that abstinence is the solution, festival and club owners are extremely weary and most of the time get disregarded in an attempt to create drug-safe zones. As an example, there are organizations like DanceSafe that are spearheading a movement to create safer environments at festivals with harm reduction and peer-based education initiatives, including free information about drug use safety, drinks with electrolytes, ear plugs, condoms, and drug testing.

Yet despite positive trends on the matter, DanceSafe was asked to immediately shut down the booth at Electric Forest in June of 2015 when, after multiple complaints, top level event producers deemed that the initiative couldn’t be a part of the festival. The real issue? Still partially unknown. Mitchell Gomez, DanceSafe National Outreach Director, was told it was because of several things: heroin information fliers, selling off their merchandise, drug testing on-site, but there was no public comment made by Electric Forest to confirm why.

You’d think an organization that was merely attempting to educate and diminish deaths would be welcomed to create drug safe-zones, but again our legal-political environment does not allow for this, consequently increasing the chances of deaths. It is important to understand that local United States official are perennially under the influence and burden of the Illicit Drug Anti-Proliferation Act, a law similar to the previously proposed RAVE Act that has been criticized for disincentivising venues from implementing harm reduction measures for fear of prosecution. As covered in the legislation, it is illegal for people to knowingly open, lease, rent, or maintain − whether permanently or temporarily − any place for the purpose of using, distributing or manufacturing any controlled substance. It also made it unlawful for a manager, employee or owner, to profit from, or make available for use, any place for the purpose of storing, distributing, manufacturing, or using a controlled substance. Similar bills have been passed at a local level throughout the United States, adding to the burden that promoters and venue owners already feel.

What this essentially means is that any venue or festival housing drug education or harm reduction initiatives such as DanceSafe can be targeted for “allowing” drugs to be used or distributed. Due to the penalties involved it has become not only easier but practically imperative for club owners and festival promoters to operate a Zero-Tolerance approach to avoid prosecution by local, state and federal officials.

In case you didn’t know: in the U.S. someone is arrested every 19 seconds for violating a drug law.

Today, prohibition means those caught in possession of small amounts, and sometimes paraphernalia, of illicit drugs are heavily fined, sentenced to prison or illegally and physically punished. 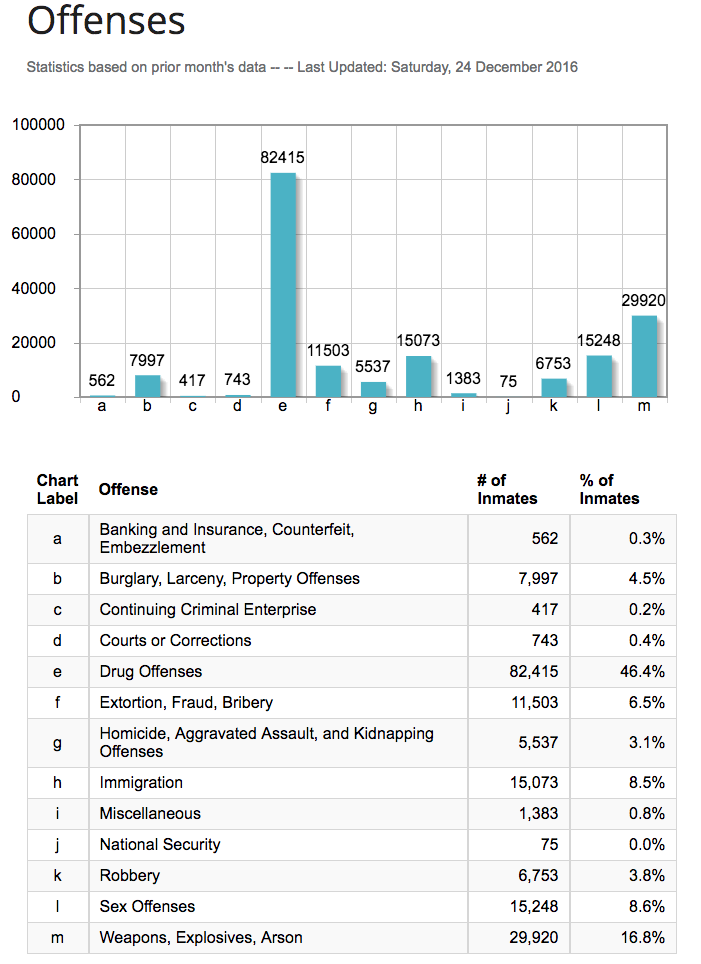 The consequences of any drug conviction are life-long and severe and, importantly, are not experienced equally. Despite comparable drug use and selling rates across racial groups, African Americans and Latinos are disproportionately punished for drug law violations.

With drug violations being an easy solution for police officers pressed for high arrest quotas, thousands of wrongful arrests that overwhelmingly victimize communities of color occur every year.

See the below infographic about the disparity of incarcerations between whites, hispanics, and blacks.

Note: The average annual cost per inmate in the U.S. is between $30k and, New York with the highest, $168k per year, respectively.

If you zoom into our dance culture and festivals, you find micro-societies where people feel safe to experiment with different drugs. There are, however, several hundred arrests made every year at dance music festivals nationwide with the most common reasons being possession of drugs and being under the influence of drugs.

There is also unbalanced reporting when it comes to associating dance music culture to drugs. It appears that drug-related deaths, arrests and incidents are reported far more widely if they happen at dance music festivals or venues, whereas news never focuses on the genre of music played when they occur at other locations such as Bonnaroo, Firefly, Lollapalooza and more. Why is this? Are news outlets quick to jump on anything that forwards the stereotype connected with dance music culture? Why are officials and the media failing to recognize that drug culture is an endemic part of today’s society and can be found in casinos, bars, schools, parties, strip clubs, nightclubs and festivals that feature any genre of music?

With these allegations, the media continues to negatively portray dance music festivals and club-culture, blaming recklessness and experimentation as the main culprits with strong associations to the music people are partying to.

In the year 2016, $27.6 billion of the national spending budget was allocated to support efforts in reducing drug use and its consequences in the United States, essentially to fight the War on Drugs. Of that, $11.0 billion was allocated for early intervention, treatment, and drug recovery services. This is an increase of $692.7 million (6.7%) from 2015.

The Substance Abuse Prevention and Treatment Block Grant of $1.4 billion allows states to provide a range of clinical and recovery support services to clients during treatment and recovery, and also supports planning, coordination, needs assessment, and quality assurance.

In the U.S., heroin use, and consequently, heroin-caused deaths are increasing.

“Criminalization drives people to the margins and dissuades them from getting help,” said Grant Smith, deputy director of national affairs at the Drug Policy Alliance. “It drives a wedge between people who need help and the services they need. Because of criminalization and stigma, people hide their addictions from others.”

Long-term trends have been stable or declining in Western and Central Europe since the late 1990s. However, there are early signs of a resurgence of heroin due to an increase in the availability and use of the drug in some markets of Europe, as well as a major increase in the size of individual forfeiture cases of heroin destined for Europe.

Although the U.S. doesn’t offer regulated and controlled self-dosage as part of addiction treatment, it is the one limitation that has created a world of a difference in other countries where it is permitted.

In fact, where drug addiction is not a crime, only addicts who cause disruption to civil order are prosecuted.

The Netherlands offers anonymous drug purity testing and analysis through a program called the Drugs Information and Monitoring System (DIMS).

The samples are tested and the user is informed about the content in the drugs and is warned about the risks. The data is then used for educational, prevention, and drug policy purposes.

Along with this service, in case harmful substances are detected in the drugs, the DIMS will start a national or a regional warning campaign, a Red Alert.

In 2001, Portugal decriminalized all drugs and treated the use of illicit substances as a public health issue, not a criminal one. People caught with small quantities of drugs are fined and referred to a treatment program.

Despite eradicating punishments for personal drug possession, a 2015 report finds drug usage has not increased and is becoming less common. 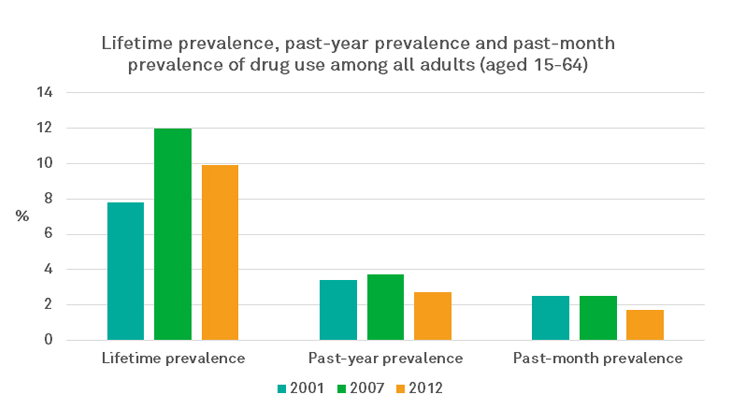 At a European level, the EU recognizes the nightlife audience as a drug vulnerable group and has sanctioned The Club Health and Safer Nightlife program to offer guidance for the implementation of prevention programs in leisure settings. 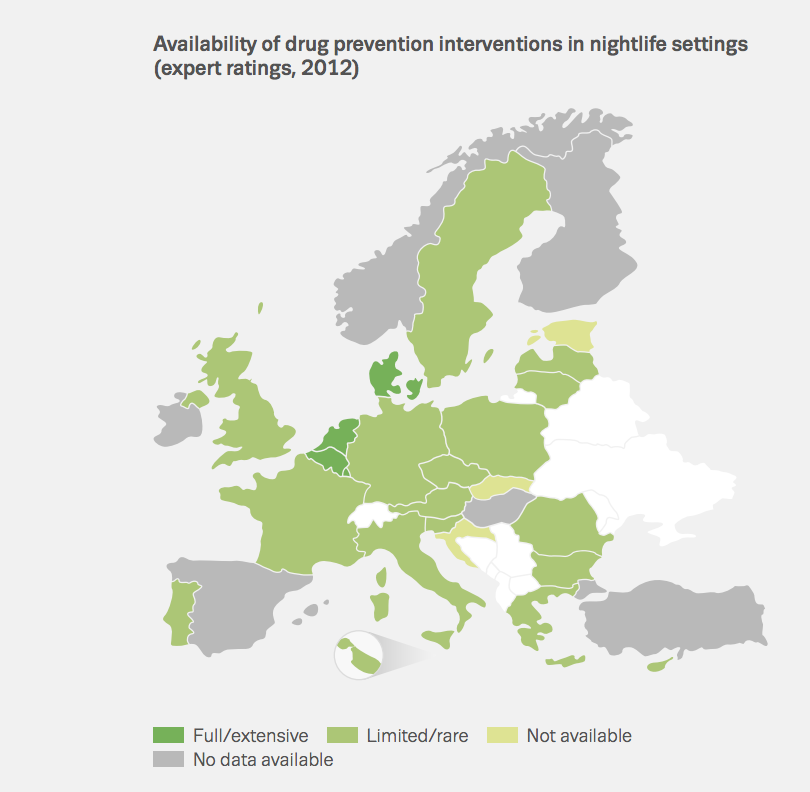 In the 2014 European Drug Report, positive results were reached with “integrated, environmental prevention approaches, which include components such as responsible serving, the training of bar and security staff and cooperation with law enforcement agencies.”

Additionally, a specific concern is the risk posed by intoxicated young people driving home from nightlife venues. A recent review found that “targeted media campaigns, together with the offer of free late night transport, can reduce the number of traffic accidents caused by drink-driving. However, interventions targeting drug-driving are uncommon.”

The stark truth is that people have been and are consuming drugs everywhere. It is irresponsible to assume Zero-Tolerance and criminalization will completely curtail consumption. Consequently, criminalization has caused a massive incarceration problem in our country, despite most of the drug offense arrests being non-violent offenders.

As evidence strongly proves, drug consumption should be destigmatized through open conversations about what and how much to consume. It should be treated as a public health issue and not a criminal one.

It may be virtually impossible to do this until local and federal laws such as the Illicit Drug Anti-Proliferation Acts are repealed, but in order to combat drug culture and related deaths we must focus local, state and federal campaigns on education and harm-reduction initiatives.