Why CRSSD Music Festival Is a Staple SoCal Musical Event 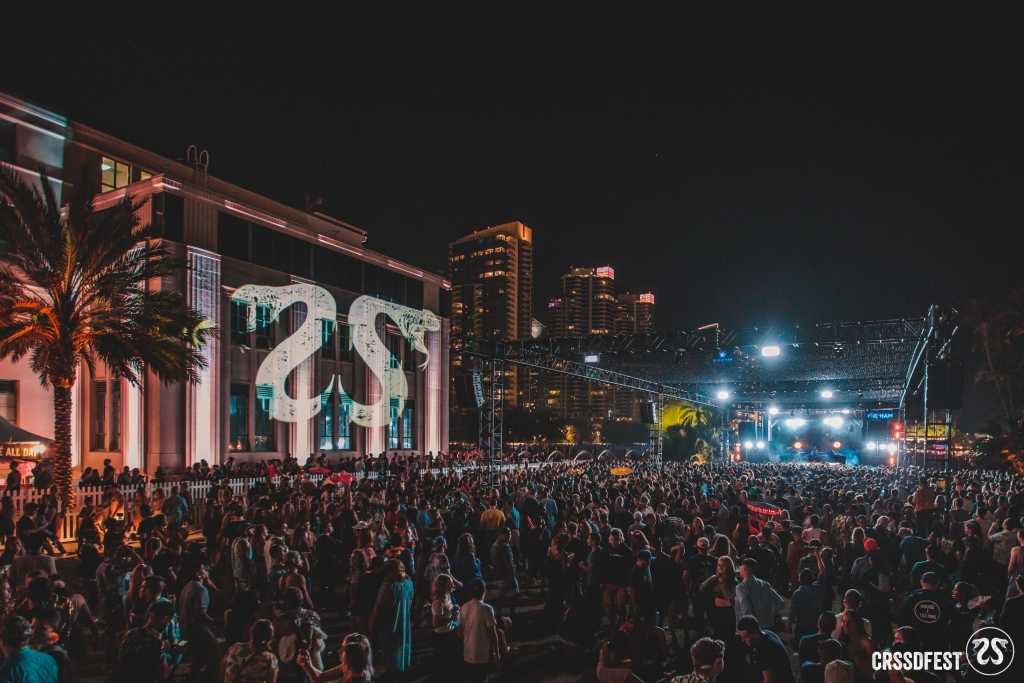 Why CRSSD Music Festival Is a Staple SoCal Musical Event

Set on the idyllic coast of California, CRSSD Fest holds the honor of being one of the premiere house and techno festivals in North America. The bi-annual event never disappoints with its lineups of dance music superstars, as well as up-and-coming talent. Beginning in the spring of 2014, CRSSD Fest has no doubt established itself as a staple in the SoCal Music Festival scene. Fans of house and techno flock to the intimate festival full of great music, good vibes. Read below to find out why CRSSD is one of our top picks for festivals any dance music fan to hit, and don’t forget to buy tickets to the CRSSD 2021 festival fall edition.

The first reason why CRSSD is a staple in the music festival scene is an obvious one: the masterly-crafted lineups full of amazing talent. It’s no wonder dance music fans flock to the bi-annual event. What’s so special about the lineups at CRSSD compared to other festivals in the area? The meticulous thought the FNGRS CRSSD promoters put into bringing only the best-of-the-best talent. The festival aims to put not just local, but renowned global talent, on the stage.

Read Next: Five Must-See Acts at CRSSD 2021 Plus Exclusive Playlist

All dance music fans can appreciate the special treats CRSSD brings in the form of artists who only play rare sets in the United States, especially the techno artist lineup. This year’s techno lineup at the City Steps stage in particular is a behemoth, with ANNA, Kolsch, Sven Väth, Dennis Ferrer b2b Cassy, Kobosil, Paula Temple, Robert Hood, Township Rebellion, and more. Even better, the Ocean View stage at CRSSD, which acts as the main stage, still brings in unique and class A acts. There’s no reason to avoid the main stage here. Some special acts at Ocean View not to miss this year are Flying Lotus, Paul Kalkbrenner (live), Tiga and Hudson Mohawke present LOVE MINUS ZERO, Jon Hopkins (live), and many more.

All we know is the set conflicts will be killer this year. Can you clone yourself yet? Asking for a friend.

CRSSD is without question the best techno and house festival on the West Coast.

No one can deny the mix of an urban setting and picturesque seafront views at the San Diego Waterfront Park provides a perfect blend of both worlds. Attendees get to enjoy incredible sunsets, weather, and views as the perfect accompaniment to the incredible music they’ll hear all weekend. While the music scene of San Diego often gets dwarfed by the larger metropolitan areas such as Los Angeles and San Francisco, CRSSD would not be the same if it was held in any other location than this scenic city on the Pacific. Not to mention, being located in the downtown city center of San Diego means there are plenty of hotels and other accommodations within walking distance so festival-goers can be at ease they can party as hard as they want. 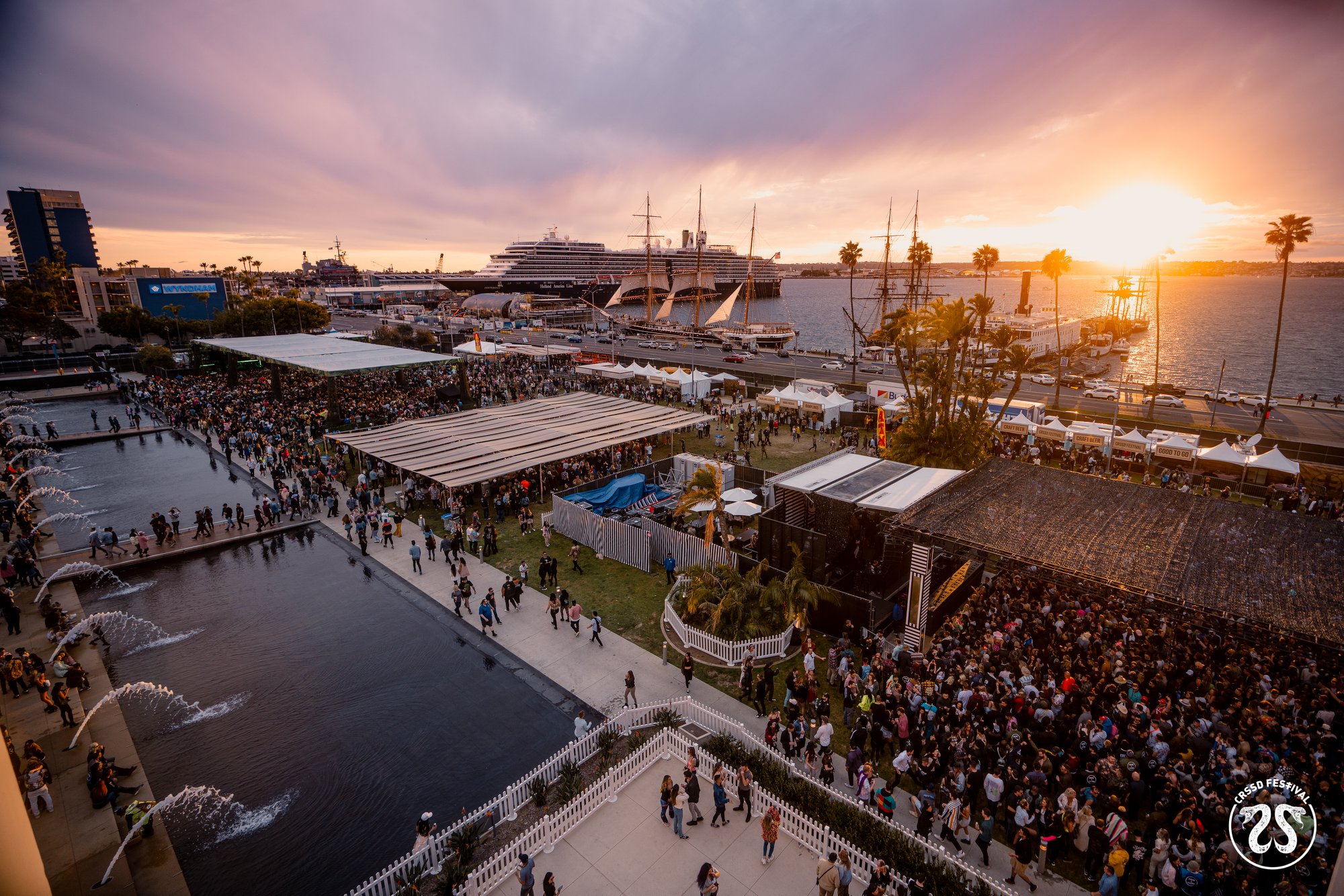 For many festivals, $20 for chicken tenders and fries is the norm. Not at CRSSD, though. Given the SoCal festival is located in one of the most prestigious culinary regions in the United States, the vendor lineup is every bit as good as the music. After all, San Diego has a thriving food scene and is home to nearly 200 breweries. Fans can drink craft beers from local breweries such as Elysian or Golden Road. If beer isn’t your thing, grab any one of the delicious craft cocktails or even some Japanese sake from one of the several bars around the venue as well. If you get hungry, the lineup of local food vendors will surely satisfy featuring everything from sushi to seafood to Korean cuisine. What better way to celebrate the diverse influences of the SoCal food and music scenes than by eating Korean BBQ while listening to thumping techno at the City Steps stage?

Every house and techno fan in North America either owns or has seen the iconic CRSSD “House x Techno” bomber jacket. The festival one-ups others in their attention to high-quality merchandise for all fans of the genres. Not to mention, the festival attendees consistently bring it year after year with their looks. Given CRSSD wants to distance itself from the typical rave fashion, attendees get creative and bring their best style forward.

“Rave attire: No furry boots. No pacifiers. Some kandi is OK, but anything overboard will be turned away. Please use your judgement – this is a festival, not a rave.”

Want to hit the festival circuit with the latest looks? Check out Shop by 6AM. 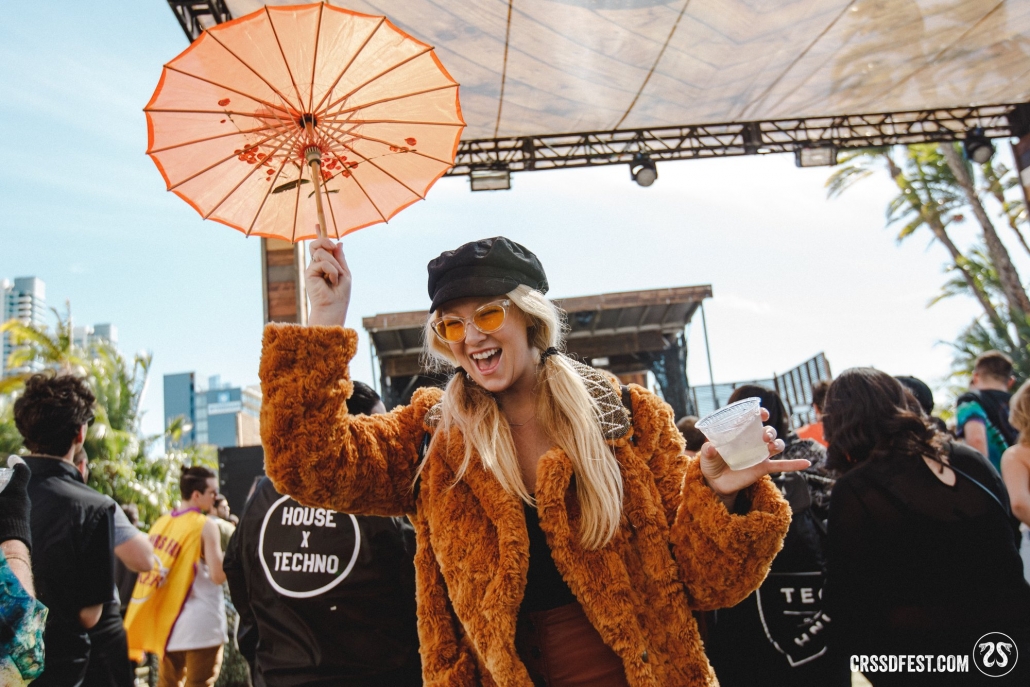 As a 21+ festival that discourages rave attire, CRSSD positions itself as a more mature offering in terms of other SoCal festivals. The crowd is vibrant, yet relaxed. Everyone is there to enjoy themselves without judgment. Given the fantastic lineups of artists which span several genres, fans can vibe out at any of the stages in peace. CRSSD is one of the few festivals on the West Coast where people who want to see a main stage headliner such as Zhu or Odesza can convene with those who feel more at-home in a dark warehouse.

To us, CRSSD is the quintessential California festival. It’s a 21 and up crowd and (not to hate on the younger crowd), it kind of creates a vibe that’s a little more mature and musically sophisticated. The industry really needs more scenes that CRSSD is one of the best to do it.

6. The Ban of Fan Clacking

Imagine you’re just getting in the groove of a set. Then all of a sudden you hear that dreaded sound: “CLACK, CLACK, CLACK.” The rising popularity of the dreaded clacking fans is arguably one of the worst things to happen to the dance music scene in recent years. Thankfully CRSSD decided to take a stand against this nuisance and all but ban the clacking of such fans at their event. Most dance music fans can agree this is a very much welcomed rule so they can enjoy the music and not the wretched sound of a fan clacking in their ears. 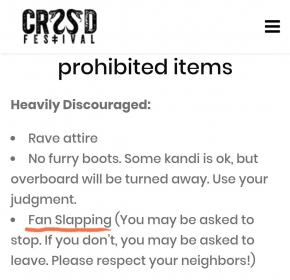 While CRSSD brings in impressive headliners, perhaps even more impressive is the perennially stacked undercard featuring underground favorites. The FNGRS CRSSD promoters pull out all the stops to bring unique bookings from all over the world. Some notable undercards of the past who are now bonafide stars in their own right are Amelie Lens, Charlotte de Witte, Helena Hauff, Eli Brown, Channel Tres, Bob Moses, Cut Snake, Redlight, Sacha Robotti, Bedouin, Julia Govor, Solardo, Palms Trax, Kyle Watson, and Patrice Baumel.

For this Fall 2021 edition, some of the undercard talent we are excited to see are Township Rebellion and 박혜진 Park Hye Jin.

Finally, we would be remiss if we didn’t mention one of the reasons CRSSD is such a staple is because of the unique and incredible sets we’ve witnessed. Something about this festival, in particular, invites all the performers, whether they be spinning a DJ set or opting for a live set, to really bring their A-game. Maybe it’s the water in San Deigo, or maybe the artists seem to know they have an amazing audience of house and techno enthusiasts and craft their sets accordingly, feeding off the energy of the crowd. One thing is for sure: if you attend CRSSD, be prepared to witness some of the best sets you’ll ever see from your favorite artist.