Why Are So Many Nightclubs in Europe Closing Down?

Why Are So Many Nightclubs in Europe Closing Down?

It appears that European nightclubs are not benefiting from the very same rebirth and surge in popularity that we are witnessing with electronic music as a whole industry.

Based on data collected from Resident Advisor, the Economist published a study that dives into the decline in numbers of nightlife venues throughout Europe.

The accompanying map of Europe below tells a specific tale, one of a clubbing industry in the wane. Red dots delineate the European nightclubs that are listed as closed down in 2016 by Resident Advisor. The principal cause, you may have guessed, is gentrification. The term specifically refers to the transformation of an urban area caused by the purchase and renovation of houses by upper or middle-income families or individuals. While of course property value increases, this often results in displaced low-income families as well as the closure of small businesses and, as we are now seeing, businesses that cater to a lifestyle in contrast with that of the neighborhood’s new occupants. 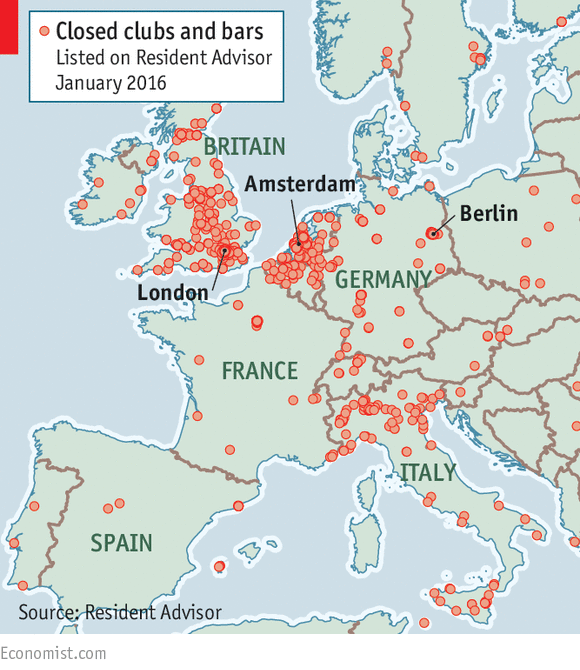 The Economist lays out some key figures:

Increased rent prices, lack of available venue space and the muffling effect of gentrification has hit the nightlife industry hard. This is no more evident than in London and, specifically, with the high-media case surrounding the revocation of fabric’s license. It takes one neighbor to complain for others to join suit, beginning a sort of power-war that sees local councils often swayed to keep “many voices” happy rather than to protect the late-night establishments in the area.

“If there’s one complaint, then the whole circus starts,” said Eelko Anceaux of De Marktkantine, one of the handful of clubs that bucked the trend and opened in Amsterdam in 2014. It is possible to build good relations with neighbors, he claims, also buying on a business strategy that sees his club double as a restaurant, thus adding a more acceptable value proposition to the eyes of families and middle-class residents. Yet, complaints about noise and drunk or stoned club-goers are hard to avoid, rendering the life of any club owner tricky to deal with.

Again, it must be understood that it’s these complaints that put local officials and politicians smack in between a rock and a hard place. We agree, of course, that the solution is never to shut down a night club just to second the whim of local yuppies who look down on the nightlife industry as a disease. The truth remains, however, that politicians get stricter about licenses, code violations, and complaints, often leading to accusations by venue owners and patrons of officials purposely targeting nightclubs as a result of pressure from commercial or residential neighbors. We have seen this happen to fabric prior to the recent closure, when the club won a year-long court battle against Islington Council, which wanted to introduce drug-sniffing dogs among other strict security measures. We have been seeing this happen with Ibiza clubs, who are being targeted with early sound curfews, fines, temporary closure for code violations or complete party shut-downs. We have seen this happen with the closure of u60311 in Frankfurt, and that of two Berlin clubs in 2015 for fire code violations. And there are plenty more such examples.

There is no point in denying the inevitable: despite the action by some cities to prevent the decline from continuing further, we are likely to keep seeing this trend in the near future. Amsterdam has had a Night Mayor since 2002, a position that lobbies on behalf of night-time club and entertainment venue owners. Recently the City of London announced that it is recruiting for the position of Night Czar, charged with transforming the city into a true 24-hour destination. In Germany, Mr. Lutz Leichsenring of the Club Commission sits on a working group for the Berlin chamber of commerce, while Berghain/Panorama Bar was recently bestowed the honor of being recognized as a “high-culture venue“. The idea is for these night-time positions to increase and improve relations between governments, neighborhoods and of course clubs and other type of late-night music venues.

Despite the above, there are other factors responsible for the slump of the nightlife industry in Europe: the decline of 24-hour party people. There are social changes that are in themselves changing the way the current youth generation thinks and behaves. Firstly, the European Monitoring Centre for Drugs and and Drug Addictions is reporting a marked decline in MDMA consumption with 15-34 year olds in Germany, Britain, Denmark and Spain. While trends in the use of other drugs less closely linked to clubbing, such as cannabis and cocaine, vary by country, the statistics relating to ecstasy indicate that the European youth of today may surprisingly me more abstemious than that of 10-20 years ago. This idea is further strengthened by statistics that point to a fall of heavy alcohol consumption among young people. In Britain alone, between 2005 and 2013 the proportion of 16-24-year-olds who were frequent drinkers (defined as drinking alcohol on five days in the previous week) fell from 7% to 2%. The price of drinking has also increased, which, coupled with 2008’s economic crisis and resultant years of austerity, is having a say on how much young people leave their house to party at nightclubs. 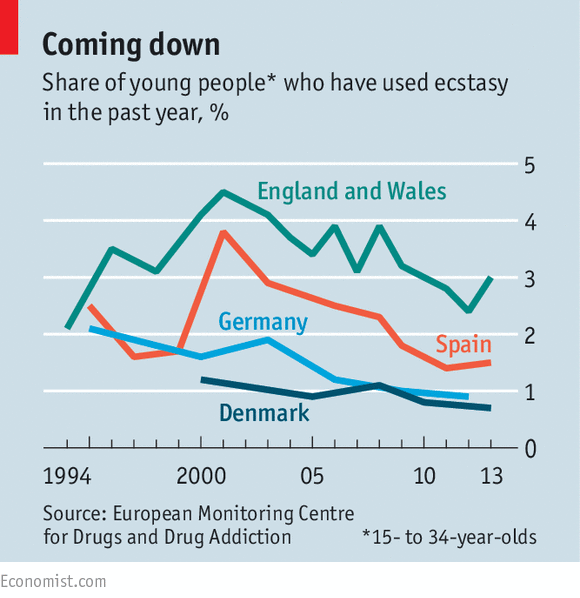 The second factor to impact on club prosperity is the surge in popularity of music festivals. In 2014 around 130 festivals took place in Amsterdam alone, while in Britain around 250 take place annually, up from 80 in 2004. Croatia is another country that has seen tens of festivals spring up out of nowhere in the last 5-8 years. Dance music fans are finding themselves saving up to attend these big-scale expensive weekend affairs, thus choosing not to visit nightclubs at home. Further, festivals can often drive up the price of booking big-name talent, making it hard for competing local venues to feature them on their weekend lineups.

This year the global nightlife scene has woken up to the aforementioned changes, launching initiatives to combat the problems causing this downward trend. The Opening Debate at this year’s Amsterdam Dance Event will featuring some of the brightest, highly passionate and most dedicated people the dance music industry has to offer giving their hotly sought opinions on important topics including the direction of nightlife in the UK and Europe in general.

While the movers and shakers in the scene keep working to ensure that nightlife remains protected, we encourage every single dance music fan in the world to support their local scene, venues, promoters, artists and record stores. Only united can we truly show local governments and communities that nightlife does matter.