Who Says Techno Has to Be Serious? Not Paula Temple 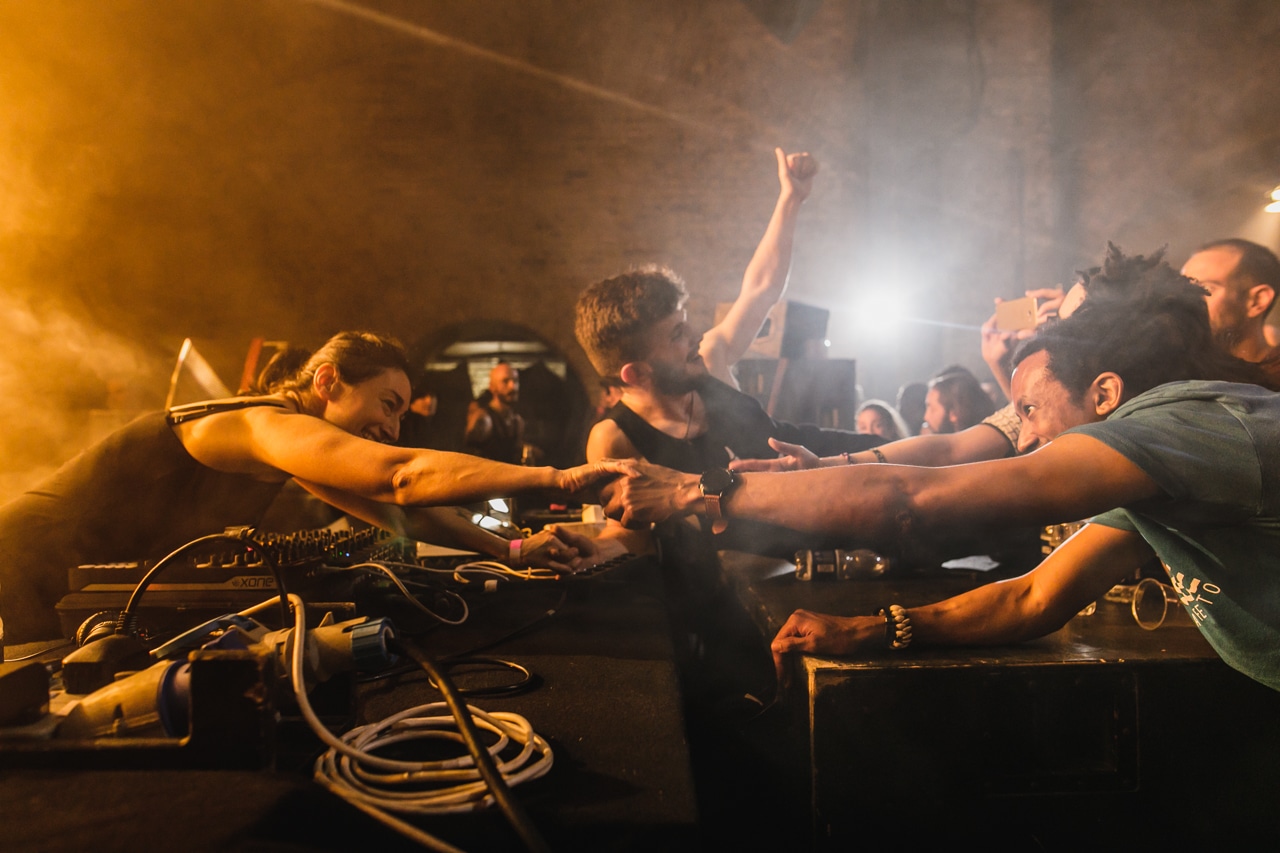 Who Says Techno Has to Be Serious? Not Paula Temple

“I was quite nervous being back on the road because it was 18 months since the whole shut down,” admitted highly respected techno artist Paula Temple as she sat in her trailer ahead of her CRSSD 2021 set. “I’ve just done a few gigs in Europe. Some pretty big ones and I feel ready again.” Wearing a simple yet bold red dress and comfy black sneakers speaks to Temple’s unassuming presence. However, don’t let her petite stature and soft-spoken voice fool you into thinking this UK-born DJ can’t hold her own behind the decks. Temple delivers hard-pounding industrial techno sets in the most graceful way. She recently wrapped up her six-day U.S. visit since last playing in Los Angeles in February of 2020. Temple shares what life has been like for her since. She also opens up about her career trajectory and why being you is all that matters.

Listen: 6AM In Interview with Paula Temple

6AM · 6AM In Interview: Who Says Techno Has to Be Serious? Not Paula Temple

How has Paula Temple been spending the last 18 or so months with no gigs? “I’ve focused more on relationships,” says Temple. “Having time for the real things that are important that I didn’t get the time to do when you’re on the road.” She and her partner became new parents to their furry child Benji. Spending time with the foster dog has helped show Temple a new take on life and what’s important. While she was able to embrace a slower pace to life, she’s ready to unleash the raw, powerful tracks in her techno arsenal she’s been working on since lockdown. Before hitting the road for her U.S. performance at this year’s fall edition of CRSSD, Temple warmed up playing alongside SNTS at Dream Nation Festival. 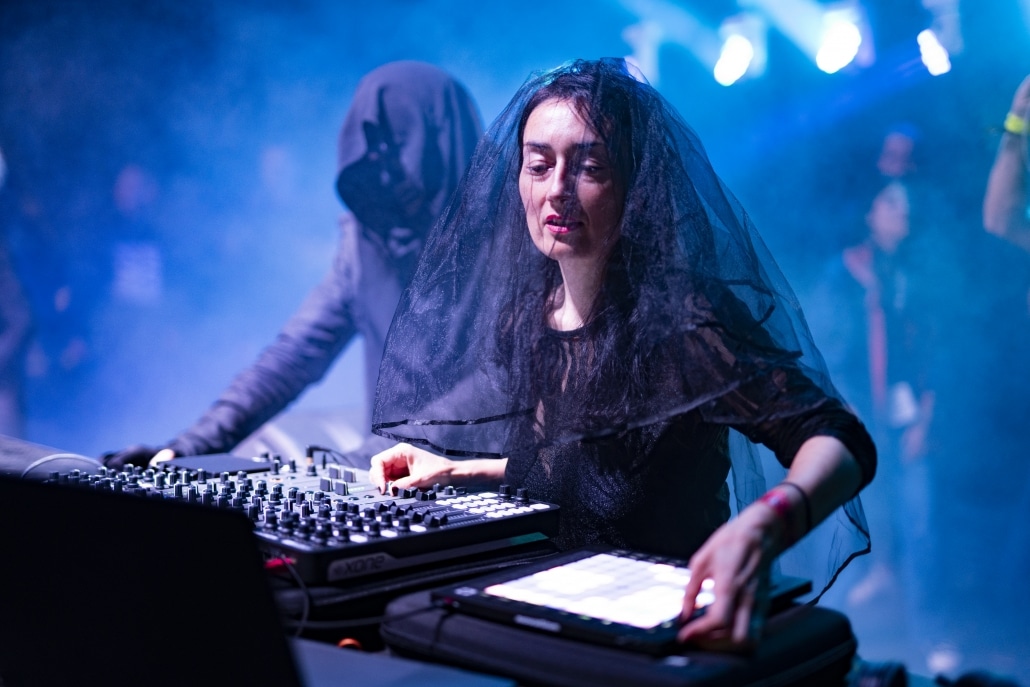 Read Next: Five Must See Acts at CRSSD 2021 Plus Exclusive Playlist

The B2B marked Temple and SNTS’ second time sharing the decks together. The two had never met before playing their first B2B, but their music styles drew them together. Energy doesn’t lie and neither do frequencies and vibrations. Music brings people together. Tapped with curating a night at ADE, a Dutch electronic music festival, Temple thought it would be exciting for their shared fanbase to play together. Thinking back to the organic chemistry they shared behind the decks SNTS  was a no-brainer. For anyone who has attended a techno event knows the ambiance can be dark, moody, and serious. Temple wanted to change things up a bit for their next B2B in Paris. “Like most parties, I don’t make an effort dress-wise. T-shirt and whatever; normally a free record label t-shirt,” laughs Temple. “But for this one, the Dream Nation set, I just decided last minute to get a black veil.” 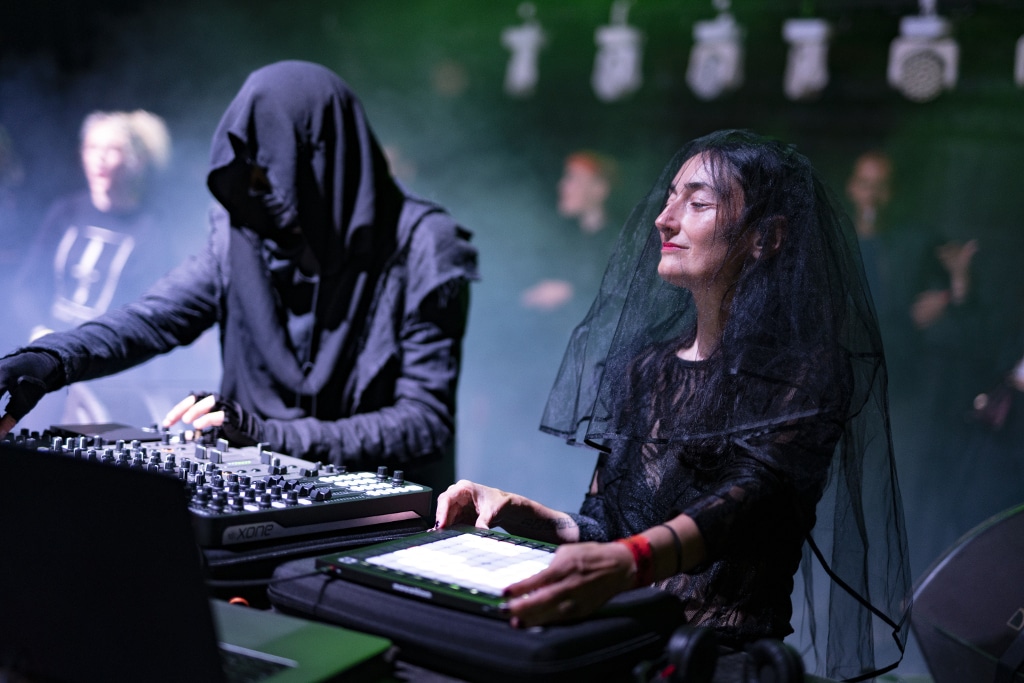 Dubbed a “techno wedding” across social media, Temple admitted the veil “made me feel like I could have more fun.” Showing a slightly playful side she proved techno can be serious fun. Temple may keep things light(hearted) in a fashion sense but her music is anything but. Known for delivering uncompromising techno, Temple digs deep to find techno gems. “If a single track appears in Shazam during any of my sets I’ve failed,” laughs Temple giving a nod to the underground and did she deliver. Paula Temple unleashed a thunderous techno set at this year’s CRSSD.

“Don’t say to yourself ‘oh I can’t do this. I’ve never heard this before.’ If you ever feel like no one has done this before that’s exactly where you should be moving toward.”

As effortlessly as Temple takes reigns at the decks, don’t think this comes without preparation. “I always think specifically about each set. I really thought about the festival set and I wasn’t sure if people had even heard my music,” she shared hours before taking over CRSSD’s City Steps stage. “I’m not sure where techno is at the moment in America, but I’m staying true to myself. It is going to be heavy at times but also explores a more melodic side. I call it ‘romantic techno,” laughs Temple. With a slight pause, she adds, “And for a lot of people that’s still very heavy, even too heavy for them.” Temple of course took the opportunity to crowd test a few unreleased tracks during her CRSSD 2021 fall set. 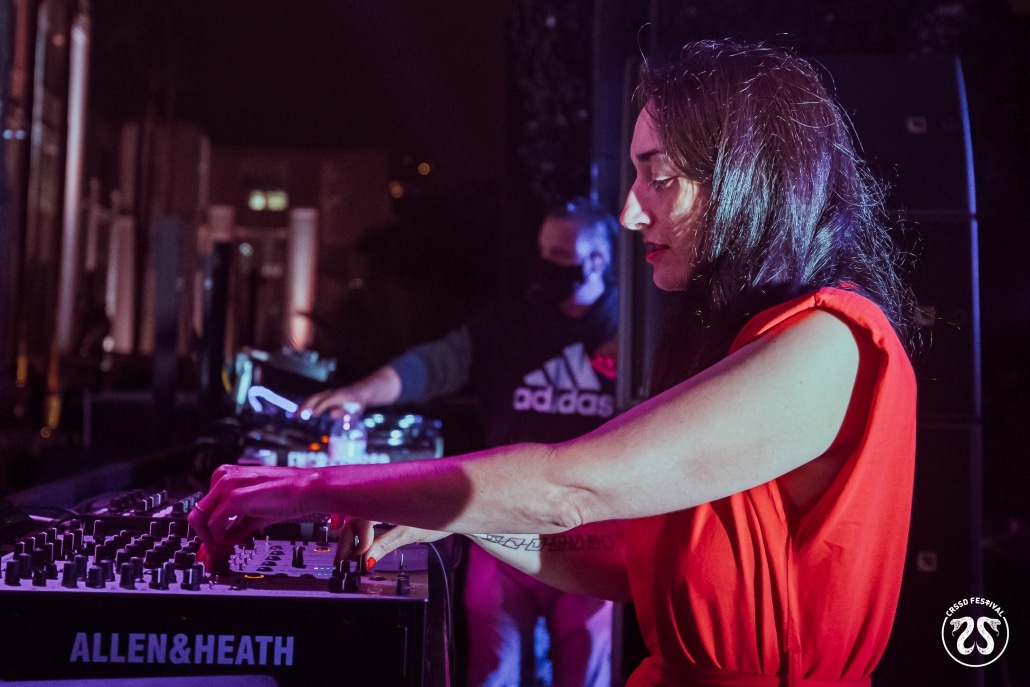 “I couldn’t believe the bleeps and the deep bass…never heard anything like it.”

Paula Temple says of “LFO” by LFO, the track that first got her hooked on techno at the age of 12.

Success and creativity can emerge from unexpected places. That’s exactly what happened with one of her latest tracks titled “Apocalypse.” Moog Music approached her with a project focusing on three of their synths. Seeing this as a fun opportunity to explore new sounds and gear, Temple was all for it. She also credits her wife for being the other half of the project. “We decided to try these synths out together and learn about semi-modular synths because I don’t know anything about modular or semi-modular,” explains Temple. “I’ve always been self-taught going by ear and intuition, so it’s been fun figuring stuff out together.” Then one day, her partner decided to have a jam session of her own. “I’m hearing this amazing thunder in the other room,” she describes of the track’s 160 BPM and admitting to never making a track that fast. “She was pulling the cords out and sticking the cables back in and in the wrong places, but it sounded so gritty…” Experimenting is a must in the music-making process and can open doors to fresh, new sounds. Sometimes the best things happen unexpectedly.

“I’ve got to remind myself ‘you are where you are because of what you’ve done…’I don’t need to be anything else.”

Powerful words, Paula Temple reminds herself to never doubt in her ability.

“Re-engineering favorite tracks is a good way to learn but not a good way to develop your own sound,” says Temple. “So definitely do that as a learning tool, but it’s about constant experimentation and exploring, and just being brave. Don’t say to yourself ‘oh I can’t do this. I’ve never heard this before.’ If you ever feel like no one has done this before that’s exactly where you should be moving toward….record everything, every crazy idea.”

Before writing off an idea pause, get curious and explore it. Rather than clipping your project’s wings before it takes flight, see what it can become. It’s not to say your first idea will be the best or what sticks, but it could lead to something great. Temple certainly hasn’t let caution run her life, and she encourages music producers to throw caution to the wind. 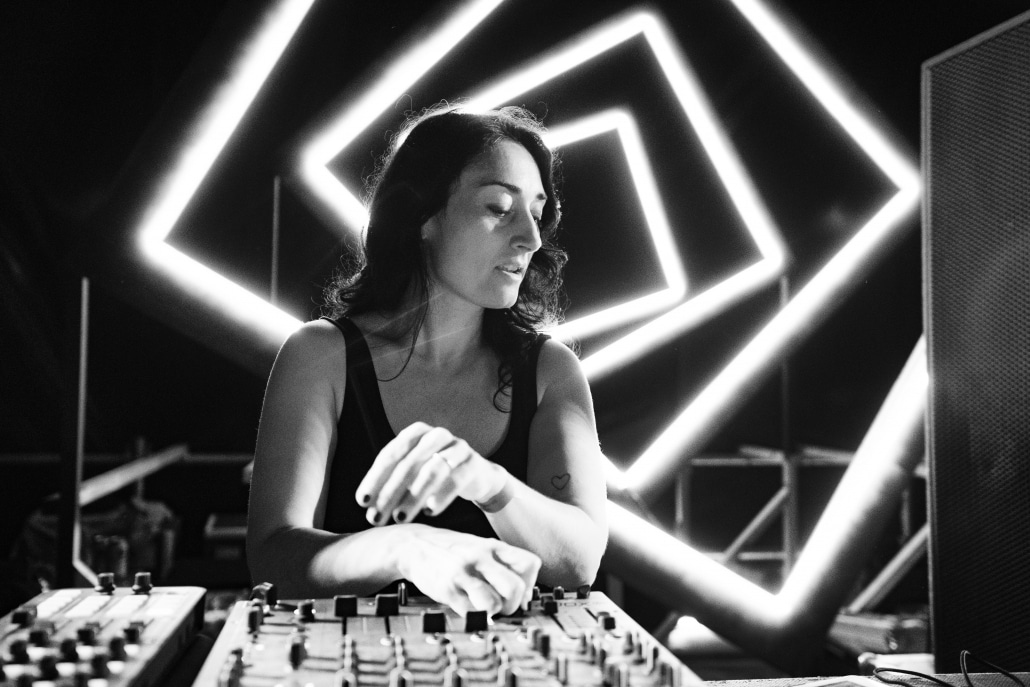 Paula Temple Reflects on Then & Now

Women in the workforce are constantly needing to prove themselves more than men. Whether it be working harder to earn recognition or a promotion, women face several hurdles.  A recent report conducted by USC’s Annenberg Inclusion Initiative found that from 2019 to 2020 female producers declined from five percent to just two percent. While female producers have dropped, Temple comments “I don’t feel I’m working twice as hard anymore but I did for a very long time,” She goes on to explain. “I’ve had basically two lives in techno. The life before I quit in 2006, and I thought I was never coming back to techno. That was when I was working twice as hard and getting no recognition. It was very different the attitude then. When I came back onto the scene in 2013, my first record was with R&S called “Colonized.” “Suddenly I’m back in the scene, and yea, I was really surprised that after this long gap, of seven years, I honestly believed there would be progress and there wasn’t.”

So, how have things changed from 2013 to now?  “For techno, there’s been a lot of progress. I don’t know about all the genres,” she says. Her brief encounters with non-techno artists inspire little confidence. She gave an example of sharing transportation during festival gigs. “I’m sharing a minivan to get somewhere with a house artist, and I’m sorry but their attitude really f*cken stinks. I don’t get that kind of attitude in techno anymore,” Temple says. “There’s a good attitude in techno, or at least in Europe. I don’t know what it’s like in America, but everyone I meet in America seems really progressive and understands where we’re at and where we need to be. I don’t feel that when I meet a house or DnB person, so I then feel…when I think about the women in those scenes…how hard it is for them.”

Own Your Success, Trust in Yourself

Strong egos can derail your path to success while having healthy self-assurance can nourish it. The fine line between confidence and arrogance. However, anyone who meets Temple will know she certainly doesn’t fall into the latter category. She humbly owns her success but also notes it comes with a price. “I definitely am successful. Every day I think how lucky I am: doing what I love, surrounded by the right people,” she explains. “Now there’s a bit of pressure that I have to get used to. So there are some stages or big festivals I get asked to play and suddenly I feel a lot of pressure. I’ve got to remind myself ‘you are where you are because of what you’ve done, so just remember that.’ I don’t need to be anything else. So just be who I am, and Nicole always reminds me ‘just do you.’”

As for Temple’s parting words? “I just hope you have a good time and enjoy the thrill I love to give.”