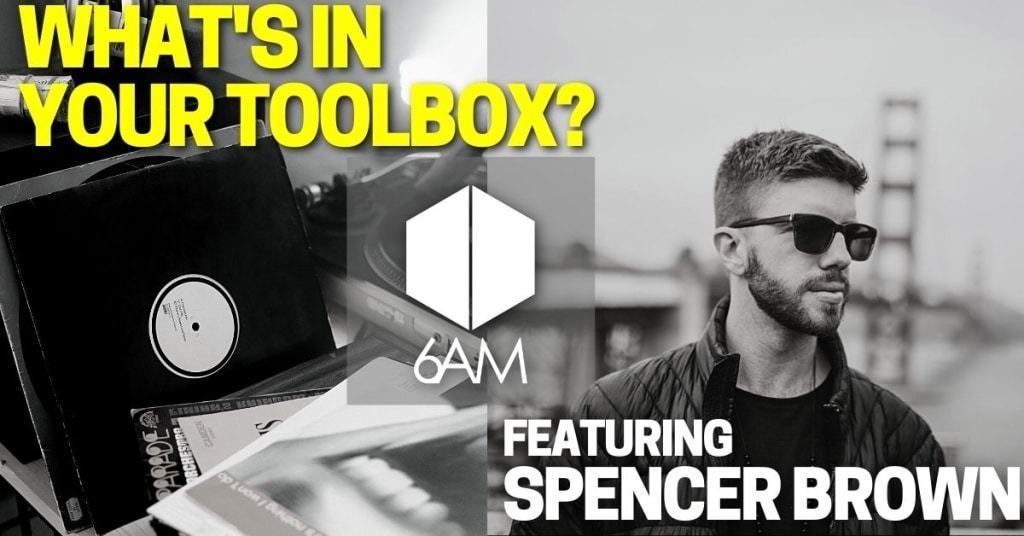 Artists will never come unprepared to a party. They always bring a toolbox packed with tracks that are truly dance floor destroyers. What’s in Your Toolbox features artists’ secret weapons, aka, the tracks they don’t leave out of their USB. Spencer Brown is an artist who likes to live on the cutting edge of dance music. Whether it be techno, deep house, progressive house, or a whopping 18-minute stormer, Brown creates what he wants and when he wants for the love of music. After choosing world-class imprints such as Anjunadeep, Last Night on Earth, Factory93, and mau5trap to release his diverse work, Brown launched a label of his own. His new label, diviine, is official with the release of his latest double-sided single “Forbidden Flow / 18 Min Loop”. The genre defying artist now shares his top six house and techno tracks.

A secret weapon. Since I found it via Shazam (thank you Patrice), I’ve played it in most of my sets. Growing up a drummer, I love syncopation. The groove is syncopated and stunning. Explodes the dancefloor. It’s a great tool to groove-lock a room after a riskier track.

What was originally an experiment that took a few hours to make turned into a staple in my sets. Who knew a random sax sample could light up the dancefloor? Very grateful that Hernán Cattáneo was playing this one out frequently. It’s a great track to move from deeper, more progressive sounds to bridge into my peak time crate.

Stunning groove. Hypnotic melody. Invōker is one of my personal favorite producers at the moment and a really nice guy. This is one of those tracks where I feel “I wish I made this.” The melody is so simple that it’s infectious. The percussion is also a highlight.

Sex of Insects “I Can Hear The Light” (Dave Pad Mix)

Probably the most interesting bassline of any track in my library at the moment. How did he make it? I have no idea. But it always locks the room in hypnosis. My friends and I coined the style “Snorkel Tek” to describe this underwater sound. Always on the lookout for more snorkel tek.

My most played track in 2021 on Spotify. Another track I found via Shazam (thank you Gab). Something I love is when bassline and percussion come together to create a single syncopated groove. This track does just that. Once again, growing up a drummer, I’m very drawn to strong grooves.

We originally made this track back in 2017 in one sitting. Both of us played it out a few times with decent reactions, but neither of us felt it was good enough to release. Anjunadeep approached us to release it in 2021, and we thought, “why not?” We had played it for years. After the release, the track took a new life! The floaty riff and sneaky bassline explode the dancefloor. The track is still a staple in Lee Burridge’s sets (I was probably sent 10 videos from friends) and is also supported by Martin Garrix, Gorgon City, and Eelke Kleijn. So random from a track we almost didn’t release, but we were happy it makes people happy!