What The Festival: The Premier Festival in the Northwest

What The Festival: The Premier Festival in the Northwest 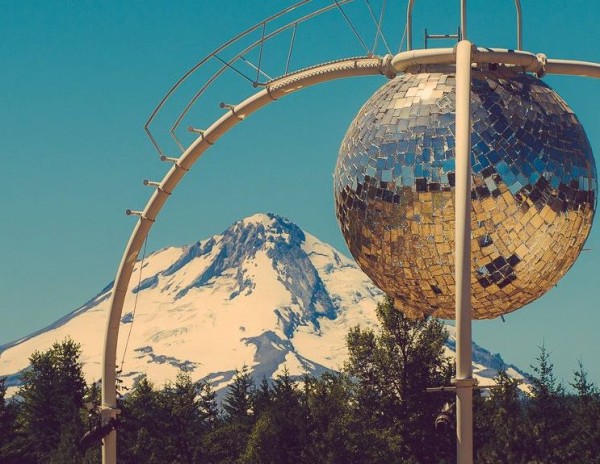 What better way to celebrate the summer solstice than a 3-day 3-night festival? None. And no, we’re not talking about EDC.

From June 19th to the 22nd, 5,000 people migrated to the Northwest corner of the United States to enjoy the 4th annual What The Festival. Taking place at the beautiful Wolf Run Ranch in Dufur, Oregon festival attendees were able to roam 250 acres of the grounds with a wide variety of music and activities. With fantastic musical programming and unique “micro-experience offerings” What The Festival couldn’t have provided a better atmosphere for the summer solstice weekend. 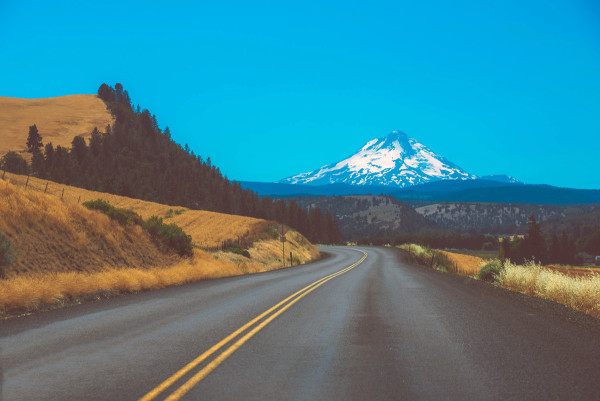 Leaving from Portland we drove through the Columbia River Gorge headed south until we arrived at The Dalles. In a moment of  lost confusion we saw a giant hazard sign pointing us in the right direction, and with this sense of adventure we knew we were in for an enjoyable weekend. The sign was clear, but our navigational doubts were curbed as we saw the caravan of cars entering the dirt road to Wolf Run Ranch.

Wolf Run Ranch is located at the edge of the Oregon Forest with spectacular views of both Mt. Hood, Mt. Adams and the desert…the views really don’t get any better. Being a relatively secluded venue and off the beaten path, Wolf Run Ranch is the ideal location with a unique story.

“The venue is owned by our main festival producers, who have put forth the vision of the festival from the beginning and saw the incredible potential for growth after the first year. They were generously willing to invest in What The Festival and purchased the land for festival use, as well as a personal retreat space, after the first event when everyone quickly realized we needed to find an amazing permanent home because we were certainly starting something special!” – Leigh Feldman (Press Manager for What The Festival)

Located just one hundred miles from Portland, Oregon this festival saw many Northwest locals with a friendly and vibrant vibe reflecting that. Over the long weekend we were greeted and assisted by the friendliest staff members and volunteers, with each going the extra mile to make the experience memorable. In an industry saturated with so many events and festivals, it’s the little things such as this that allow What The Festival to stand out.  As we arrived and set up our mobile festival HQ, it was finally time to get into the heart of What The Festival. 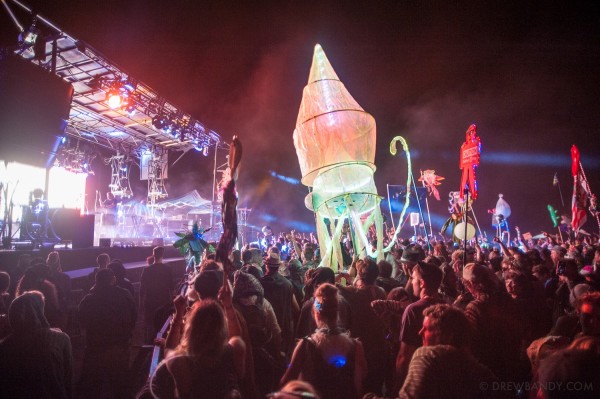 Schoolboy Qt kicked things off this year at 11am, followed by non-stop music all weekend from the likes of Knomad, Eats Everything, Rob Garza of Thievery Corporation, Anna Lunoe, Odesza, and too many more great artists to name. There was a wide variety of artists for us to explore, and we left feeling very satisfied with the music we discovered throughout the weekend.

As the light faded from the sky, Griz got going brightening up the night with his funky vibes and swinging saxophone hooks. From the looks of it, it’s safe to say that he went in on one at What The Festival.

After some music it was time to explore, which seemed like a perfect opportunity to check the Illuminated Forest. Within the Illuminated Forest you’ll find interactive artwork, instruments from someone’s fantasy, a teahouse, and even a dragon. Dragon-esque stage that is. With flames everywhere and sonic bliss filling the auditory spectrum, it was quite an experience wandering over to this area of What The Festival. 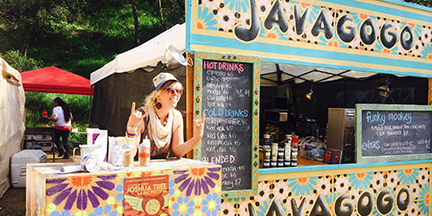 The second day was upon us and first order of business was to get some sustenance. Starting the day with an acai bowl from Moberi and an eye opening coffee from Java Go Go was the perfect start to what was about to be a long day. For those who are not early risers, for those that go hard at night…the pool was the prefered spot to start the day. Enter the Splash Stage… 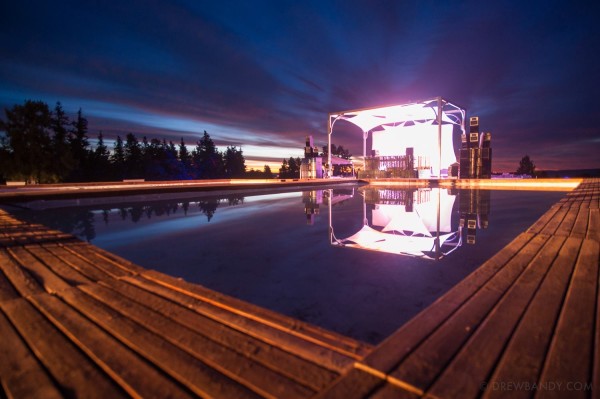 The Splash Stage during sunrise

Two giant splash pools custom made for What The Festival became a playground of carefree and energetic vibes throughout the day. We spent some time here Saturday, but the highlight for us was Thomas Jack’s Pool Party on Sunday with Anna Lunoe, Justin Jay, and Thomas Jack himself. The three brought their signature sound to What The Festival and did so with class and style. Thousands of people going off to the sounds of Justin Jay in a pool in the middle of nowhere was the musical epitome of our weekend. 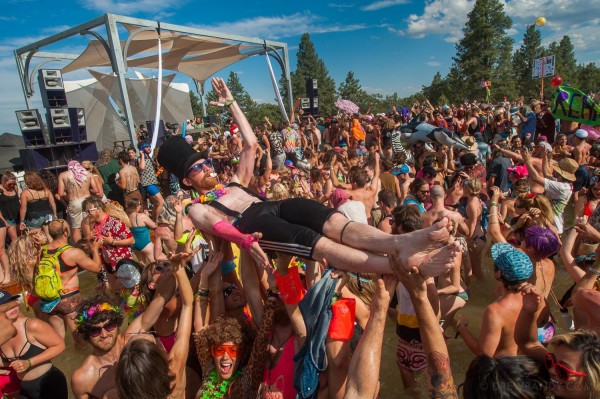 As the sun moved past the giant disco ball and toward the mountain on Saturday night, UK artist Laurent Clerc AKA Little People set the vibe for a night full of funk and free spirits. With only a few US shows lined up, his performance was a welcomed treat to those who were fortunate enough to see him at What The Festival. Afterwards Big Gigantic and Tokimonsta started the party vibe and took the night to a different level. When the night finally reached its darkest hour, we found our way to the silent disco of fire and ice where Djs competed for our attention. A peaceful way to end the nights festivities to say the least.

The Summer Solstice at What The Festival is a time you’ll never forget. Imagine an icy mountain over your shoulder, the isolated desert in the distance ahead and the beating sun directly overhead, and you are having the time of your life surrounded by like-minded individuals. It was clearly another successful year for What The Festival, and the future is bright for this Northwest festival.

For us…this was the most brilliant way to start the summer with What The Festival fully embodying positive summer vibes, and we can’t wait to return next year.

[Photos Courtesy of Drew Brandy Photography & What The Festival] 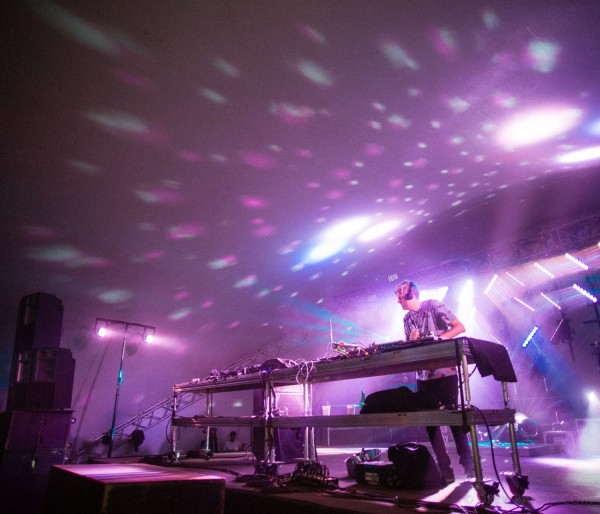 Q&A with Leigh Feldman – Press Manager for What The Festival

6AM Group: What is your role with WTF? And how long have you been involved with the festival?

LF: Press manager! I’ve been at the Festival for 3 years and have handled press outreach, on-site press management, and man the media center almost all-day during every day during the Festival, which means I know all of the very important stuff, like where to charge your phone and how to get the wi-fi code.

Can you describe the weekend at What The Festival?

What The Festival is an annual three-day music, art, film and interactive festival held 90 miles east of Portland, Oregon taking place during the Summer Solstice weekend in June. The Festival provides the perfect getaway, by offering attendees a full-sensory experience with more than 80 electronic music djs and producers from around the globe performing on 5+ stages of Funktion-One sound, along with a giant splash pool, illuminated forest, experiential art, yoga, spa treatment, movement classes, hookah lounges, massages and so much more!

What The Festival has been happening since 2012, correct? How has the festival progressed, and what were some changes made this year over years past?

This was our 4th year and we learn so much each year that we apply to the next! The Festival has grown each year and this was our first sell out. Fortunately we were prepared on the infrastructure end to know what was needed to handle a capacity crowd. So much goes in to making a festival run as smoothly as ours does. Huge credit is due to all of the staff that dedicate much of their year in preparation, and to allllllll of the volunteers that come assist with making the actual Festival run!

Is Wolf Run Ranch the same venue as previous events?

It is our third year in this location, and with 250 amazing acres that provide views of Mt. Hood and Mt. Adams you can’t ask for anything better!

Can you tell me a little about Wolf Run Ranch? What was the process like for selecting this particular venue?

The venue is owned by our main festival producers, who have put forth the vision of What The Festival from the beginning and saw the incredible potential for growth after the first year. They were generously willing to invest in What The Festival and purchased the land for festival use, as well as a personal retreat space, after the first event when everyone quickly realized we needed to find an amazing permanent home because we were certainly starting something special!

How was the overall turnout for WTF this weekend?

We had a sell out weekend of 5,000 attendee tickets sold!

What The Festival is so much more than a music festival. What was your personal favorite part of the weekend? I know picking a favorite moment is difficult, so perhaps you can give us a few standout moments.

Watching Chef Gregory Gourdet (Top Chef) dance because he’s amazing, was amazingly dressed, and is an amazing dancer (outfits at What The Festival are always top notch!)

Meeting all of the incredible press people I’ve been speaking with during the past few months in person/seeing once again all of the amazing press folks that attended last year!

Not being at EDC 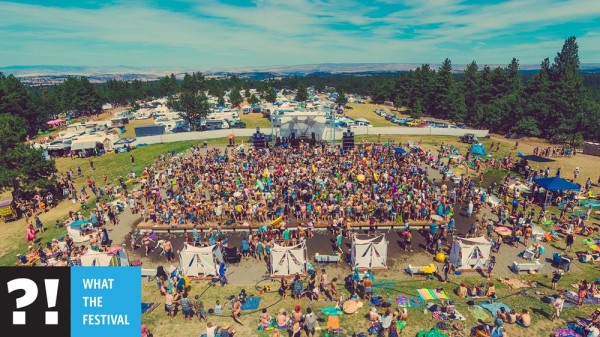 Over the years it appears that festivals have made a transition from strictly music to a more lifestyle/boutique oriented experience. Why do you think festivals like this have become so popular around the country?

Because with multiple micro-experience options, the event experience becomes more about whatever you decide to make it. With strictly music events you have your stage(s) and your campsite – your options for experiences are limited. The micro-experience offerings is the most amazing thing about What The Festival to me; that everyone comes from far and wide and that no two people will ever have the same experience during the weekend. There are so many areas to explore, stages to check, interactive art pieces, early morning classes, late night options, vendors, food carts, films, movement lessons, the illuminated forest, the hookah lounge, the spa oasis, a Japanese meets Western-era themed tea house, Silent Disco DJs, headlining artists and a giant pool…. There’s just so much to do at any given moment it makes me so thankful to be part of an event that provides so much opportunity to choose from so many other options besides just music.

Thanks for the time Leigh! Until next year… 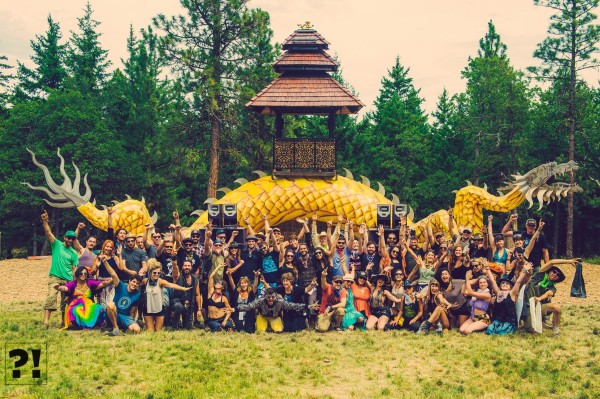