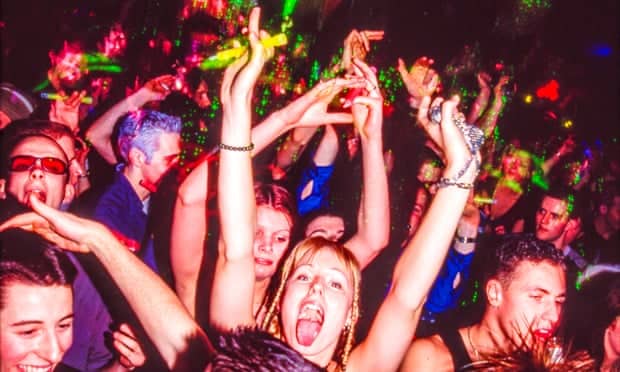 This is the first installment of our series cataloging the best rave anthems over the decades.

Let’s take a trip down nostalgia lane… all the way back to the ancient days of the 1990s when the rave scene was still underground. The 1990s proved to be a seminal time in rave culture, where the heavily gelled and spiked hair of the ravers started to peak out from underground and be seen in the mainstream. A time when JNCO jeans and butterfly hair clips reigned supreme. You had to know someone who knew someone to find out the location. Rave tracks from the 90s bring up a lot of emotion with not just the ravers from that era, but almost anyone who grew up listening to electronic music. So what are the best rave tracks from the 1990s? Let’s dig in.

While this list is certainly not exhaustive, we chose tracks based on the highly scientific factors of nostalgia, impact on the culture, recognizability, and more. The 1990s was a time when classic Chicago house and Detroit techno reigned supreme in the United States. Across the pond in the United Kindown, electronic artists inspired by the popular grunge era channeled that anarchist-type sound through breakbeats and punk-inspired electronica. Towards the end of the decade, eurodance and trance were seeping through, a marked difference in the sounds of the early 90s.

So what is the best rave anthem of the 90s? We don’t have a final answer, but we did round up some of our favorites. Let this be our snapshot in time in never forgetting the roots of the rave.

There is no denying the enduring legacy and popularity of Brooklyn-bred artist Joey Beltram’s iconic track Energy Flash, as well as equally influential “Mentasm,” which both spawned an entirely new sound for the underground. Beltram revolutionized dance music forever with the advent of the “hoover sound” aka a particular synth pattern that propagated through techno, drum and bass, hardcore, and more. Even Daft Punk cites Beltram as one of their influences.

Not many techno DJs have had as much of an impact on the underground techno scene as Dutch DJ and producer Speedy J. Hailing from the post-war industrial city of Rotterdam, Speedy J stood out in a scene where gabber music was all the rage. “Something For Your Mind” still packed a punch, but in a more demure way, and ravers will never forget its iconic line.

You can’t think of the 1990s Chicago house scene without mentioning the legend Frankie Knuckles (RIP). “The Whistle Song” has an instantly recognizable soothing melody we all love.

Waters’ is the reigning queen of house artists popular in the 90s. While she has several notable tracks, “Gypsy Woman” earns the title of rave anthem because we all know and love the the “la-da-dee-la-da-da” hook. It’s probably now stuck in your head.

Mark Archer and Chris Peat, the duo who make up Altern 8, helped bring Detroit techno to the forefront across the pond. The duo heavily sampled Derrick May in more than one tune, including the bonafide hit “E-Vapor 8.” The track peaked in the UK pop charts at #6, solidifying its status as a quintessential rave anthem of the 90s.

Orbital, comprised of brothers Paul and Phil Hartnoll, left their mark on the scene with their classic namesake albums Orbital and Orbital 2. On the later,  the duo remixed their track “Halcyon” to become the extended mix of “Halcyon + On + On.” A marked difference in some of their usual sound, the track is fluttery and delicate, and sure to bring a rush of emotions to ravers of any age.

Richie Hawtin released one of the most popular tunes of the midwest underground scene with “Spastik” under his most popular alias Plastikman. A native of Ottawa, Canada, Hawtin started throwing legendary parties under his label called Label 8 across the midwest, pushing him to icon status in the 90s.

Straight from the City of Brotherly Love, Josh Wink solidified himself forever in the history of techno anthems with “Higher State of Consciousness.” The track is still being rinsed and remixed, proving its ongoing legacy to this day.

As the mack daddy of tech house, very few artists on this list have the longstanding mainstream success Green Velvet has. Curtis Alan Jones, aka “Daddy Velvet” as his fans like to call him, has several rave anthems from the 1990s thanks to his distinguishable vocals emitting some of the more iconic lines in rave history. No one has ever escaped a crowd chanting “Cameras ready, prepare to flash.”

Moodymann has always invoked an air of mystique regarding himself. The Detroit native prefers to stick to the music. The simple basslines and use of samples make “I Can’t Kick This Feelin’ When It Hits” a timeless treasure with ethereal vocals.

No one will ever forget Born Slippy’s “Underworld,” featured prominently in perhaps the most 90s-movie-to-ever-90s, Trainspotting. This track stays at the top of classic rave anthems of all time.

Almost no other electronic act from the 1990s had an impact on pop culture quite like The Crystal Method (except for Moby, maybe). The breakbeat track “Busy Child” was inescapable thanks to its placement national GAP commercial and the opening scene in iconic film Gone in 60 Seconds.

The Prodigy – Smack My B*itch Up

Choosing just one The Prodigy track for this list proved to be a daunting task. Ask a group of ravers what one of their classic rave anthems is and each one will give you a Prodigy track, albeit a different one. There’s no other way to describe their enduring legacy than that. As for why “Smack My B*tch Up” made the list instead of other tracks like “Breathe” or “Firestarter,” well, it simply comes down to the fact this one is still being rinsed out across dancefloors.

The Chemical Brothers’ 1999 album Surrender undoubtedly changed the game. As the millennium began to wind down in 1999, the Chemical Brothers still broke out into stardom with “Hey Boy Hey Girl” peaking at number three on the UK Singles Chart.

While the tracks featured here are heavily focused on house, techno, and breaks… we can’t round up a list of iconic 90s rave anthems without including the seminal “Better Off Alone” by Alice Deejay. You know why.