Water and MDMA: The Truth 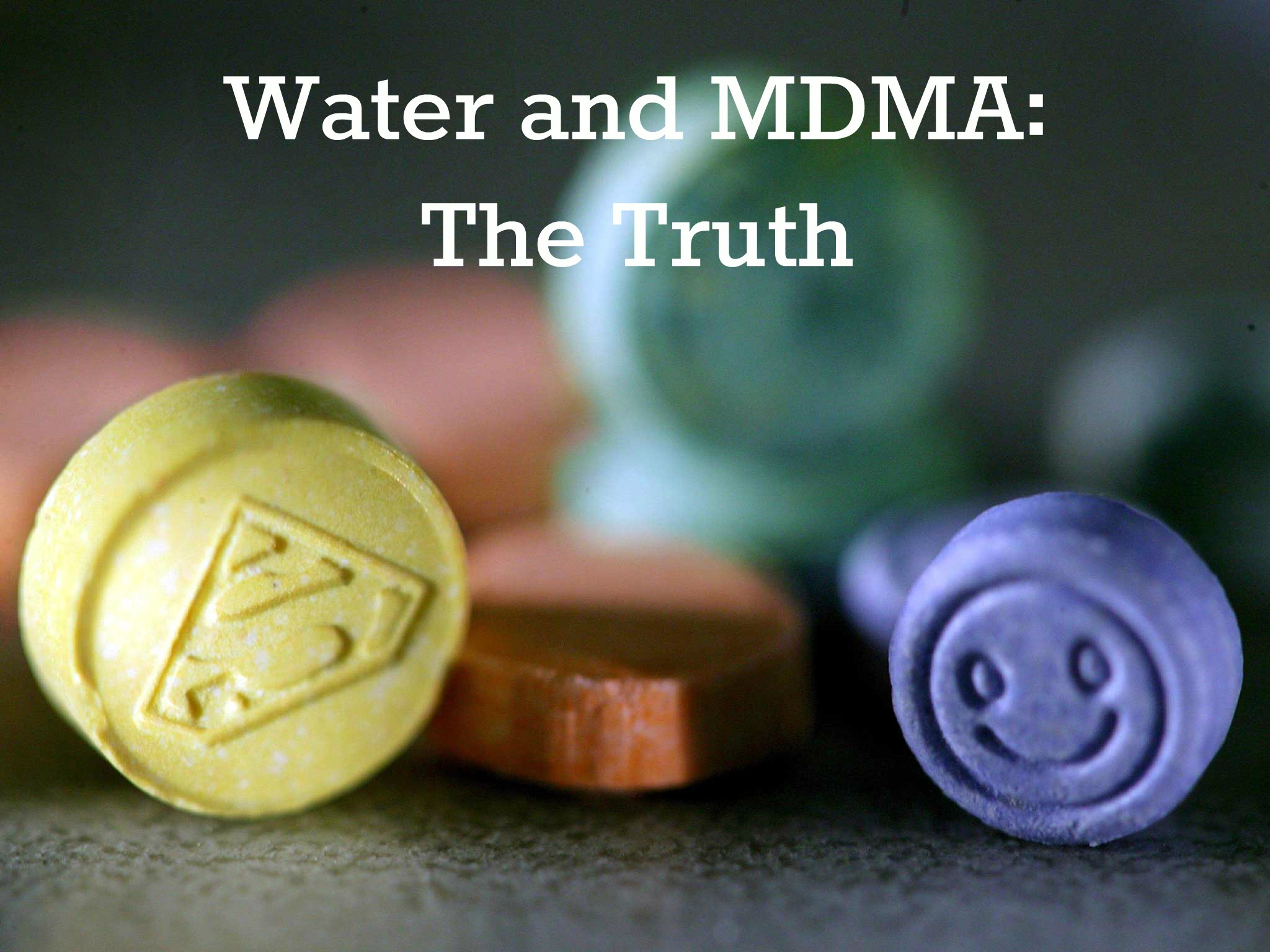 Water and MDMA: The Truth

How much water should you drink if you’ve taken MDMA?

At first glance the question seems more loaded than it really should be. Why are we discussing taking MDMA (also referred to as ‘ecstasy’, ‘e’ or ‘molly’) and why is there an advised amount of water to drink while on the substance? The simple answer is that while we advocate for safe partying, we also believe that drug safety includes education as one of its most important and fundamental pillars.

The biggest mistake party-goers make when consuming MDMA is drinking too much water, rather than not enough. Ecstasy increases your body temperature and the reason why you should drink water when taking E is to avoid overheating and dehydration. Often times people believe that water is some what of an antidote for the effects of MDMA but that is far from the case, as it does not in any way counter-act the chemical effects of the substance. So how much water should you drink?

There is no clear-cut answer, as the amount depends on the context in question. Sure E does raise body temperatures, which becomes even more of a concerning issue in situations where surrounding temperatures are hot (summer outdoor festivals for example), but you will be getting hotter in some circumstance rather than others. Unfortunately some people thought that the safe way of dealing with the issue was drinking as much water as they could, when this is in fact incredibly dangerous and has in the past resulted in multiple deaths. What happens is that when too much water is drunk too quickly, your blood’s sodium level becomes diluted, causing water to get lost into the fabric of your body tissue and ultimately resulting in swelling. What happens is the brain swells and puts too much pressure on the brain stem which controls heart and breathing functions. This swelling is called a ‘brain edema’ or ‘cerebral edema’ and can often lead to brain damage, paralysis, and death.

The most known case of a raver dying from drinking too much water following MDMA consumption is that of Leah Betts. Although this back in 1995, the incident made headlines throughout Great Britain and the world when Leah passed away as a result of over-hydration following ecstasy consumption. Unfortunately the media circus at the time concentrated on the MDMA consumption only, choosing to report the Leah’s sad passing was a simple result of “taking one ecstasy tablet once.” The truth was that she died of over-hydration brought on by lack of education on the subject of ecstasy consumption and the role of water. According to C. Haller, MD from the California Poison Control Center in San Francisco, hyponatremia (when the level of sodium in your blood is abnormally low) is one of the most common causes of ecstasy deaths or serious injuries.

The simple way to answer this question is that your body simply needs water to replace the water lost, and not any extra to counter-act the effects of ecstasy. If you’re in a hot and sweaty club or outdoor festival and dancing for hours you should look to drink approximately one 500ml bottle of water per hour. It’s also a good idea to drink ‘isotonic drinks’ that can replenish minerals and salts you’re losing through sweating, or to eat salty snacks that will get the same job done. Try to sip your water rather than taking huge gulps, urinate whenever possible and take occasional breaks to give your body some time to rest.

The links between neurotoxicity and temperature have been well-researched. It’s important that you test your drugs, and that you stay cool and hydrated without over-doing it.