US to Allow Foreigners to Travel Into Country 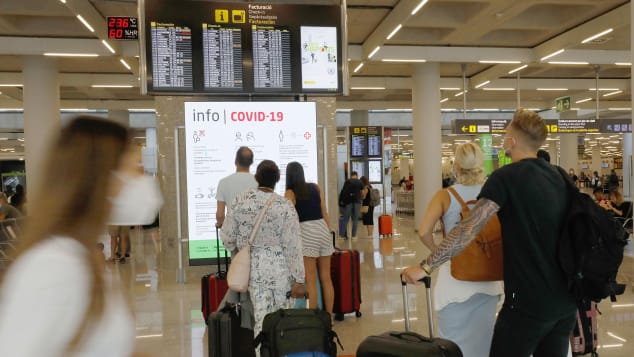 US to Allow Foreigners to Travel Into Country

In a major easing of pandemic travel restrictions, the U.S. said Monday it will allow foreigners to [travel] into the country this fall if they have vaccination proof and a negative COVID-19 test — changes replacing a hodgepodge of rules that had kept out many non-citizens and irritated allies in Europe and beyond where virus cases are lower.

The changes, to take effect in November, will allow families and others who have been separated by the travel restrictions for 18 months to plan for long-awaited reunifications and allow foreigners with work permits to get back to their jobs in the U.S. Airlines, business groups and travelers cheered — though they also called the step long overdue. “It’s a happy day. Big Apple, here I come!” said French entrepreneur Stephane Le Breton, 45, finally able to book a trip to New York City that had been put on hold over the virus restrictions.

The new policy will replace a patchwork of travel bans first instituted by President Donald Trump last year and tightened by President Joe Biden that restrict travel by non-citizens who have in the prior 14 days been in the United Kingdom, European Union, China, India, Iran, Republic of Ireland, Brazil or South Africa.

With the travel ban lifted in the country, there are many places you can visit during this time. If you are looking for places to travel, you can take a bus trip to the falls in Niagara from New York City.

White House COVID-19 coordinator Jeff Zients announced the new policies, which still will require all foreign travelers flying to the U.S. to demonstrate proof of vaccination before boarding, as well as proof of a negative COVID-19 test taken within three days of flight. Biden will also tighten testing rules for unvaccinated American citizens, who will need to be tested within a day before returning to the U.S., as well as after they arrive home. For the full story click here via AP.

Can Americans still travel to Europe?

At this time, yes and only a few countries have so far restricted all nonessential arrivals from the United States. Since the EU advice was issued, Bulgaria, Norway and Sweden are the only ones to restrict all access. While Americans can still travel to European countries there’ll be a lot more red tape. Below is a list of European countries fully vaccinated Americans can travel to as of press time. For the full article visit CNN travel.

With touring DJs having to cancel international shows in the last 18 months, this is music to their ears. “I honestly cannot wait to get back behind the decks, I have missed it so much… We just found out a couple of hours ago from the Government that events can finally open in the Netherlands so I’m sitting here with a huge smile on my face,” says techno artist Lee Ann Roberts.