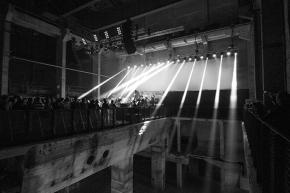 Although techno first developed in Detroit, it was the Germans who perfected it.  Dimitri Hegemann, owner of the legendary Tresor nightclub in Berlin, has fostered and embraced this culture for over two decades now, and he’s decided that it’s time to give something back to Detroit. On a recent visit to scout several locations, he immediately fell in love with “Fisher Body 21”, an abandoned auto plant. He will be performing some restorations on the building and, obviously, installing a world-class sound system. Tresor opens its doors Friday, staying open the entire weekend through Sunday; his new proposed venue will also have pop-up art galleries and restaurants. Maybe we could learn a thing or two from the Germans. The city of Detroit is fully supportive, so perhaps he’s not too far from bringing one of the most iconic nightclubs in the world to America. Good luck Dimitri!