Even though electronic dance music was born from BIPOC and LGBTQI+ communities, the current incarnation of dance music in North America is overwhelmingly white and male. This lack of diversity in dance music is no more present than on festival lineups across the United States. With the pandemic shutting down the live music industry, some members of the dance music community wondered if promoters would take this time to discover new artists and emerge from the ashes with diverse, innovative lineup offerings. As you dust off your dance shoes, let’s see how diversity on 2021 music festivals is tracking. Will 2021 welcome a shift in the festival rotation from previous years? 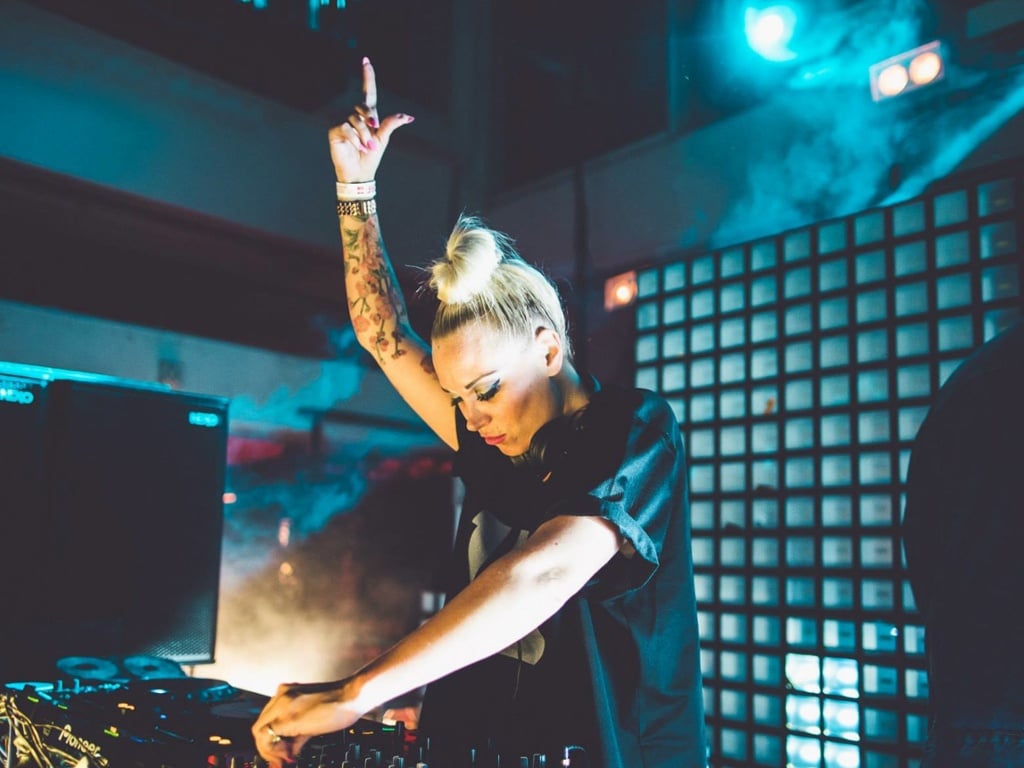 There exists a wealth of talent in the community, but unfortunately, the BIPOC and LGBTQI+ communities still resort to throwing their own parties instead of being headliners. The time is ripe for promoters to diversify their lineups and expose audiences to a wider range of talents across the gender, racial, and sexuality spectrums. The secret to success should not come down to being a white cis male.

So, how are the post-pandemic festival lineups ranking in terms of diversity? 6AM analyzed lineups from five currently-announced North American festivals: EDC Las Vegas, ARC Music Festival, Day.MVS, Lollapalooza, and Bonnaroo. EDC Las Vegas, ARC, and Day.MVS only feature dance music artists, while Lollapalooza and Bonnaroo are mixed genre festivals. For the sake of 6AM’s lineup analysis, only dance music artists were considered in mixed genre festivals in order to compare it to other dance-music-only lineups.

THERE ARE LITERALLY LESS THAN 20 (I’d say less than 10 but I am unfamiliar with much of this sonic territory, to be fair) women on this lineup. Atrocious. Congrats to friends playing but seriously, dance music booking has to STEP THE FUCK UP when it comes to gender equal lineups https://t.co/ixLPUmZ9ln

Once Insomniac released EDC Las Vegas’ 2021 lineup, women in the industry decried the lineup for its lack of gender diversity. Insomniac’s premier event is the largest North American festival dedicated solely to dance music, giving promoters plenty of room and the ability to book a wide variety of artists across genres. Given the sheer number of lineup slots Insomniac can fill with their EDC lineup, they have the ability to book more women, BIPOC, and LGBTQI+  identifying artists. So, how did they stack up with their 2021 lineup of 208 artists? 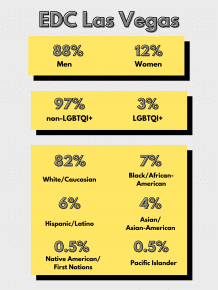 How close was Louisahhh’s guess that there were fewer than 20 women on the EDCLV lineup? Well, about 12% of EDC’s lineup consists of women, which is equal to 24 out of 208 artists. So, just over 20 artists. In terms of diversity in all areas, EDC Las Vegas misses the mark.

Arc Music Festival is a brand new festival dedicated to house and techno in Chicago, the city where house was born in black and queer communities. So, did ARC pay homage to house music’s origins with their lineup of 23 artists? Let’s dissect. 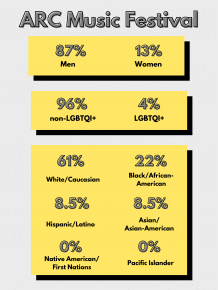 ARC did considerably better than other lineups in terms of racial and ethnic diversity, but comparable to the other lineups in terms of lack of women and LGBTQI+ representation. Given the history of house music in Chicago, it’s good to see ARC trying to pay homage to the genre’s black roots. However, they could book more LGBTQI+ artists to really pay respects to house music’s origins.

From the FNGRS CRSSD promoters, who hold the beloved bi-annual CRSSD Festival in San Diego, comes a new two-day event entitled Day.MVS featuring an all-star lineup of mainly house artists. Out of the 17 solo artists on the lineup, here’s how Day.MVS fared on the diversity front: 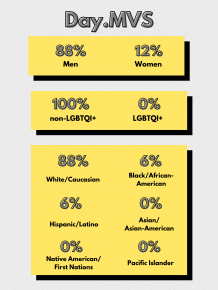 Despite being a new festival to the scene, Day.MVS did not bring a fresh take on their lineup in terms of diversity. 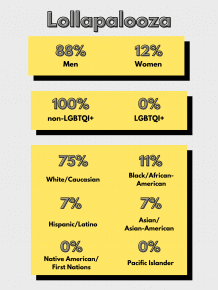 Lollapalooza is comparable to the other major festivals in this article with a deficit in women, BIPOC, and LQBTQI+ electronic artists.

Fan-favorite festival Bonnaroo always features an impressive lineup. Unlike other festivals featured in this article, Bonnaroo prominently features jam bands in their lineup among other types of artists. While dance music is not their main genre, Bonnaroo often features dance music artists in a number of their slots. Here is the breakdown of the 30 dance music artists on Bonnaroo’s lineup: 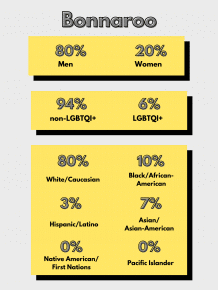 Bonnaroo ranks higher than the other festivals in gender diversity, with 20 percent of electronic artists on the lineup being women. They rank similarly to the other lineups in terms of LGBTQI+ and racial diversity.

The outcry for more inclusivity of non-white cishet male artists seems to be rightly justified. Promoters need to take note: it starts with you. Start researching more artists who don’t fit the typical dance music bill and give them a chance. The more times artists get a chance at a bigger platform, the wider their reach will be. Small changes will make a big impact. Hopefully, these festivals will see a bump in the number of women, BIPOC, and LGBTQI+ artists next year. While lineups are resembling the same diversity imbalance of pre-2021 music festivals, hopefully, 2022 will open the door for greater inclusivity.

The analysis of these lineups for diversity includes some approximations. Given people can be of more than one race or ethnicity, 6AM’s analysis counted multi-racial or multi-ethnic artists as part of a minority group. In addition to this, 6AM excluded electronic music groups with multiple members to only compare solo artists.