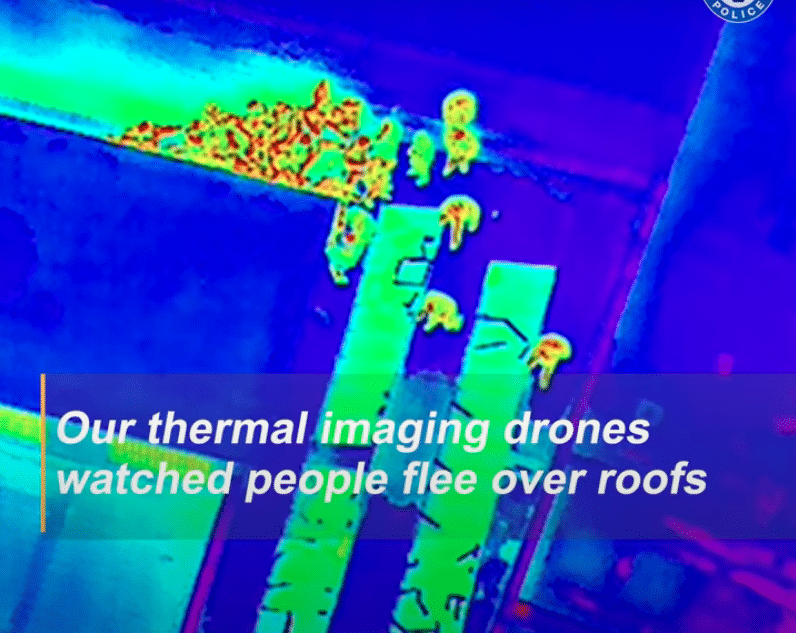 Thermal imaging footage from a police raid of a “packed nightclub” in England has gone viral, showing dozens of party-goers attempting to flee the venue from the rooftop.

The venue in Birmingham, England, boasted a VIP area, dance room and a DJ who, along with the venue owners and promoters, could now face a £10,000 ($13,880) fine for breaching the country’s coronavirus lockdown rules, according to West Midlands Police.

Dramatic footage released earlier this week shows officers shouting “police” before forcing their way into the illegal rave, located near the city’s Jewelery Quarter, in the early hours of Sunday morning.

As reported by CNN:

“The commotion is audible from a crowd as they become aware that their party has been ended rather abruptly. Police were pelted with bottles and one officer suffered a minor injury, according to police.

Thermal imaging from a police drone showed revelers trying to escape the venue from the rooftop.
England is in its third national lockdown, with people instructed to stay home and mixing between households banned. The illegal party had a bar, neon signs and a dance room, and officers even came across a recording studio and gym in the building, police said.”

Watch a video from the raid, showing the thermal imaging footage of club goers trying to escape from the nightclub via the rooftop:

Approximately 70 party goers were issued with £200 ($278) fines, according to West Midlands Police.

“Our officers continue to work long and hard to protect the public and reduce the spread of this deadly virus by breaking up these gatherings, often in really difficult circumstances. While there’s much to be hopeful of in terms of the roll out of coronavirus vaccines, people must remember that we are still in lockdown and the virus is still a real threat to communities across the West Midlands.” — Assistant Chief Constable Chris Todd