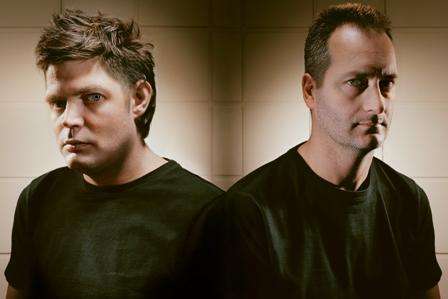 Although Slam didn’t make Resident Advisor’s Top 100 this year, it’s undeniable that the duo had one of their greatest years yet. Releasing their 5th album Reverse Proceed, running Soma Records, and sharing the booth with any techno DJ worth their salt, 2014 was more than kind to Slam. Reverse Proceed is a beautiful compilation of 14 original tracks that truly push the boundaries of techno. Atmospheric dub textures? Ya they got that. Analog and modular sequences that make me feel as if I’m raving in the year 2099? Ya…they nailed that too. If it were up to me, this would win album of the year…but alas…it’s not, and I digress. Out of those 14 tracks, they recently released a “reinterpretation” EP on Soma which invites the immensely talented Planetary Assault Systems and Flug to remix Factory Music, a track clearly aimed at the center of the dance floor. For Techno Therapy today, we bring you the remix package of Factory Music, and all of it’s techno goodness.