#TBT Series: What Was It Like To Be At The First Ever DEMF/Movement In 2000? 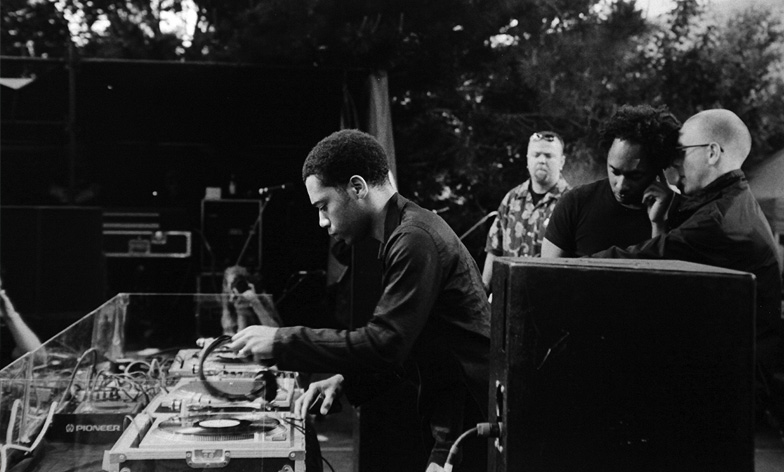 #TBT Series: What Was It Like To Be At The First Ever DEMF/Movement In 2000?

Each year at the end of May, thousands of fans descend on Detroit’s Hart Plaza to experience Movement Electronic Music Festival. As most attendees of Movement may know, the festival’s history goes as far back as the year 2000, when the celebration was first called Detroit Electronic Music Festival, or DEMF for short. The annual electronic music event changed named two other times, going simply as Movement in 2003-2004 and as Fuse-In in 2005 before being taken over by Paxahau under the current name.

But what was it like to be in Hart Plaza during the event’s freshman year sixteen years ago? The first DEMF was a landmark celebration that brought visitors from all over the world to celebrate techno in the city that gave birth to the genre. At the time, the City of Detroit injected serious money into DEMF, working with pioneers of techno to put on a weekend festival that went down with few hitches, no reported crime and plenty of injected tourism for the Motor City.

The flyer from that year tells a clear story of how DEMF started and what it has become today. We see on it an entire list of techno pioneers who will be returning to Hart Plaza once more at the end of next May. Names the caliber of Stacey Pullen, Richie Hawtin, Juan Atkins, Kevin Saunderson, Magda, Mike Huckaby, Eddie Fowlkes, Derek Plaslaiko, Stacey Hale and Ectomorph, all acts who have remained at the forefront of electronic music for decades now. The names of other illustrious DJ guests on that roster are easily recognizable, including those of Carlos Souffront and Laurent Garnier. It is clear that from day one, the festival has always tried to push the boundaries of its sound to include more than just techno, as the billing of The Roots, Mos Def, DJ Assault and Godfather evidently highlight.

Click below to see the first ever DEMF lineup and schedule. 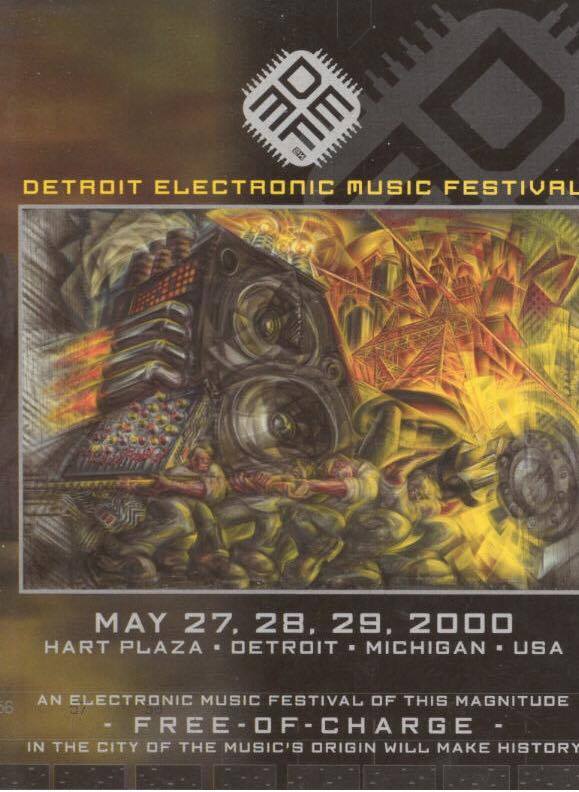 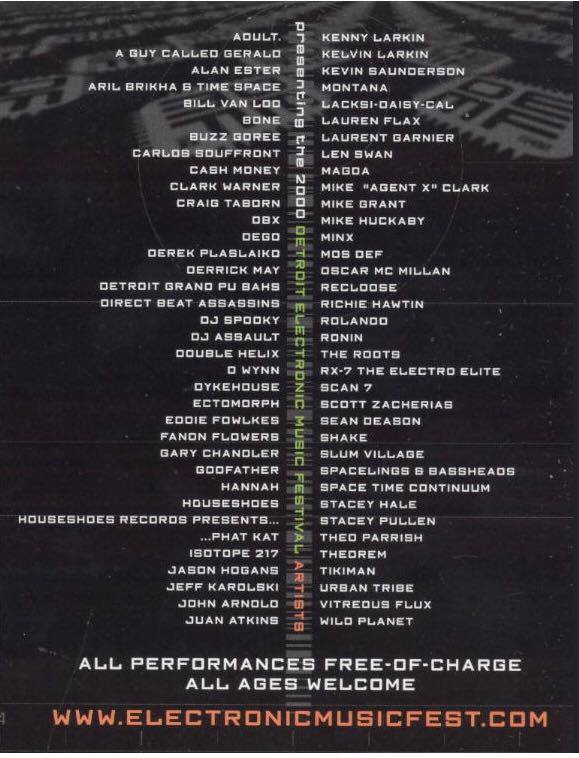 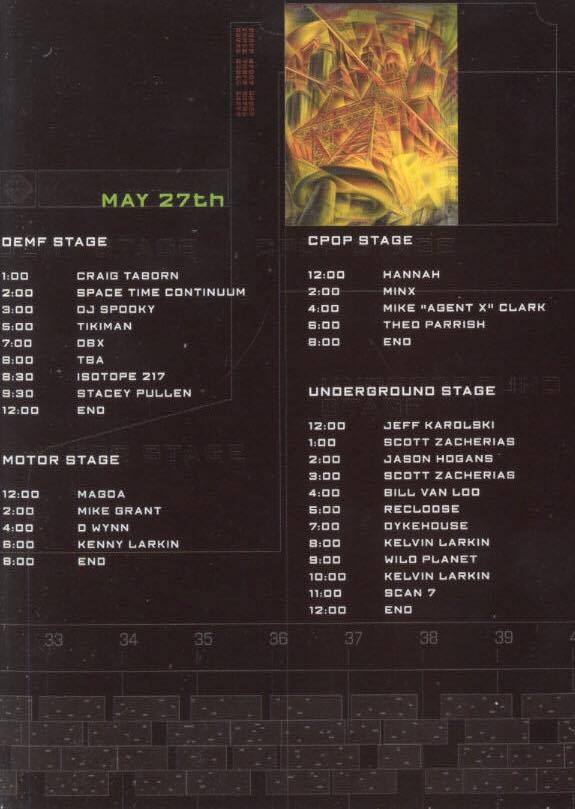 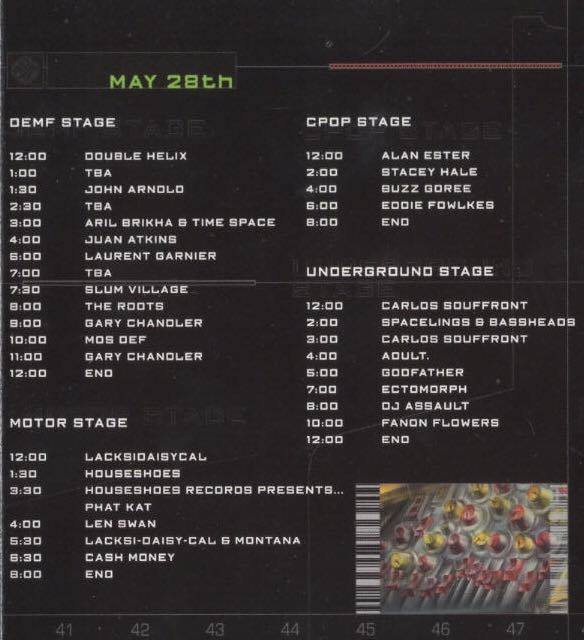 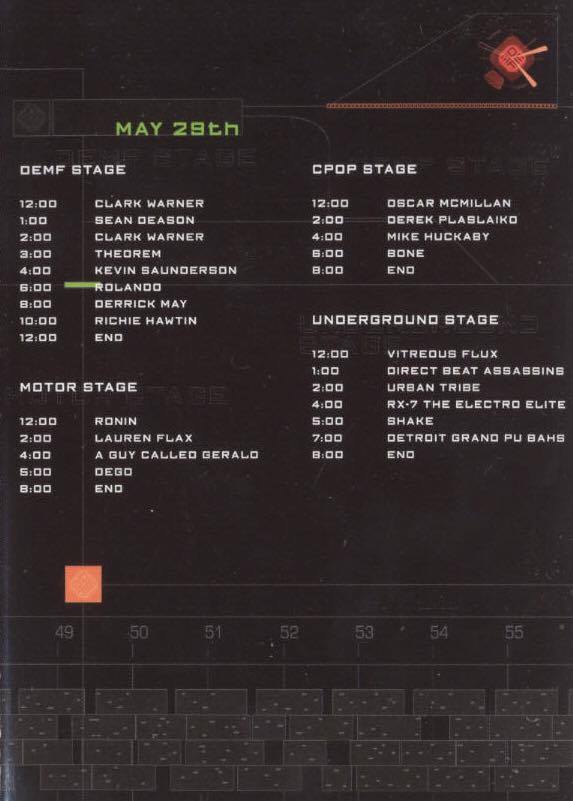 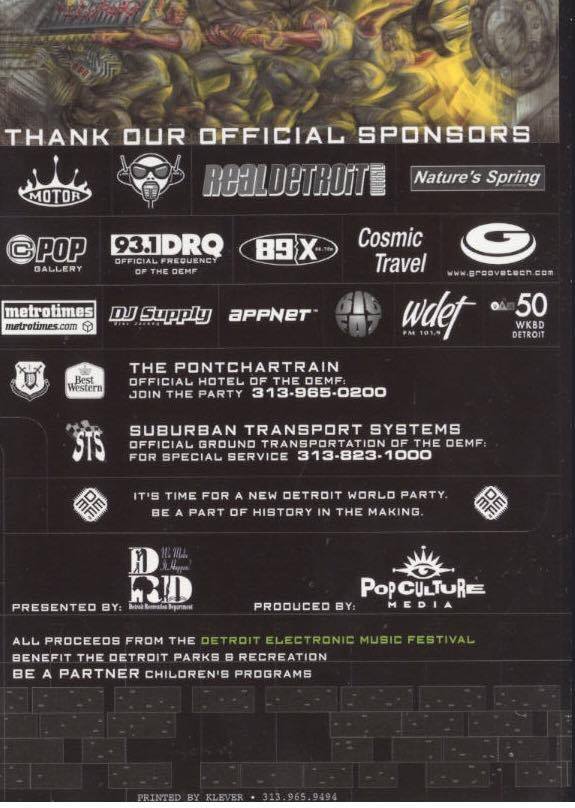 There is no doubt that the production in 2000 was not quite up to the level of the work put on by Paxahau in today’s day and age. Below you can get a glimpse of how things went down during that first DEMF in 2000, starting off with a two-hour video recording of Derrick May’s Main Stage (then called DEMF Stage) set on Day 3.

Next up, a second two hour recording from the Main Stage that day, this time focusing on another of the Belleville Three who performed over the weekend: Kevin Saunderson. The quality is poor, but it still renders an idea of how things were then and have changed since.

Stacey Pullen closed out the first ever day of DEMF’s history with the following performance in Hart Plaza’s built-in amphitheater:

Mike Huckaby played the C Pop Stage that year, the grassy area alongside the Detroit River that is now presided by the Red Bull Music Academy Stage.

Kenny Larkin graced the Motor Stage Stage with his presence and sound in 2000, while Kelvin Larkin performed at the Underground stage.

Below is a three-hour recording of the one and only Carlos Souffront doing what he does best at the Underground Stage.

Presented by DetroitTechno.org, below is a full documentary that explores the history of the festival and how it was born in 2000. From the death of the underground to Motor Lounge, this short documentary touches on some of the significant milestones that led to the festival’s birth. Featuring original interviews with Carl Craig, Kevin Saunderson, Jason Huvaere, Dan Sordyl & Barbara Deyo, all three parts illustrate the path that led DEMF into becoming the Movement we know today.