You are here: Home / Trent Cantrelle 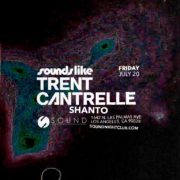 On Friday, July 20th, Trent Cantrelle brings his Sounds Like party series to Sound Nightclub in Hollywood, where he will be joined by Shanto for a night of signature techno and house.

New Orleans born DJ and Producer, Trent Cantrelle, is no stranger to the LA underground dance music scene. After 25 years in the game, Cantrelle is now known all around the world and is known for his appearances alongside Fatboy Slim, Sasha, John Digweed, Paul Oakenfold and Derrick Carter. He’s released a multitude of tracks on some of the top labels in the world, such as Nicole Moudaber’s Mood Records, Yoshitoshi, Defected, Toolroom and many more. As a constant name in Ibiza sets, he is a regular for Ritchie Hawtin, Carl Cox, Marco Carola and Adam Beyer. You can also catch Trent Cantrelle, who likes to share his 25 years of experience with his fans, on Sirius XM, Pioneer DJ Radio, and Radio FG. With his extended DJ sets and unlimited energy, Trent Cantrelle is one of a kind, so be prepared for a night of real House and Techno.

Supporting Cantrelle is DJ and Producer Shanto, who’s been in the scene since 2005 and describes his music as an operatic blend of rhythmic infatuation, harmonic consciousness, and symphonic delirium.

END_OF_DOCUMENT_TOKEN_TO_BE_REPLACED 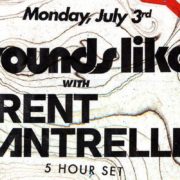 The veteran DJ has immersed himself in the world of electronic music for the last 25 years.Whether it’s behind the decks at festivals like BPM and Coachella, clubs in Ibiza and South America, or hosting his underground Sounds Like parties in Los Angeles, Trent consistently brings the freshest sounds to tastemakers and music fans alike.

END_OF_DOCUMENT_TOKEN_TO_BE_REPLACED 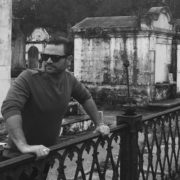 Los Angeles-based producer and DJ Trent Cantrelle is back on Sharam’s Yoshitoshi with a bold three-track EP.

This is Trent’s third outing on the imprint, a strong and impinging release that brilliantly showcases Trent’s eclectic production skills and dexterity in the studio. Scheduled for a May 19th release, Transmit That Style showcases Trent’s proclivity for crazy sound design and highly layered arrangements.

We are premiering “What I Need” off the EP, a track characterized by a strong and funky bass line, captivating sound effects and mesmerizing percussions. This is a classic Trent track, the type of sound that has made him a household name for underground electronic music fans throughout the world. Groovy, dazzling and enrapturing, “What I Need” is filled with throwback deep house elements that make it an instant dance floor favorite.

END_OF_DOCUMENT_TOKEN_TO_BE_REPLACED 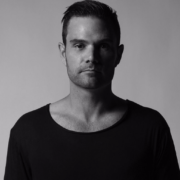 Yet another big name added to the forever-growing Session Womb roster, as Trent Cantrelle makes his debut release with his tightly carved Back Alley EP.

Grounded in the history of techno and looking forwards at the same time, Trent Cantrelle provides two peak-time workouts loaded with heavy drums, groove laded bass and signature granular haze. Today we are premiering the title track from the EP with you.

Scheduled for 21st of April 2017 release, you can pre-order the EP via Track It Down.
<
END_OF_DOCUMENT_TOKEN_TO_BE_REPLACED 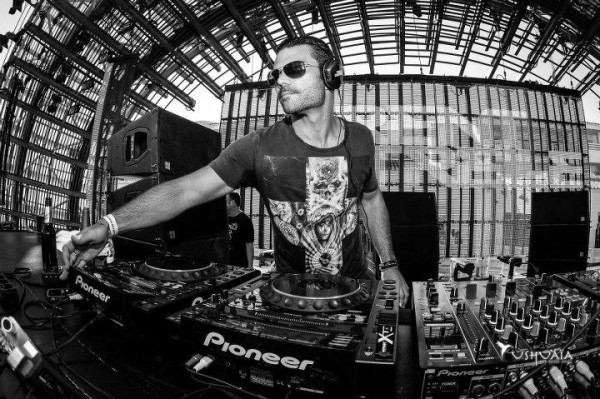 With over twenty years of experience manning the decks at parties from BPM to Coachella, the New Orleans born and Los Angeles based DJ Trent Cantrelle is something of an unsung legend along with the predecessors of the electronic music scene. Trent has an established presence in both the mainstream and the underground, a feat that only a select and talented few have the power to achieve and to maintain in the current state of affairs.

Trent Cantrelle has pulled the trigger with a hot new release titled Android Bordello EP on Nicole Moudaber’s techno imprint Mood Recordings as a follow up to the serendipitous pre-summer release of his original deeper than thou All of Them EP on DC’s Yoshitoshi Recordings. The support for the release has been overwhelmingly positive, receiving support from A-list DJ’s such as Adam Beyer, Carlo Lio, Jon Rundell, Monika Krause, Joseph Capriati, among many others. END_OF_DOCUMENT_TOKEN_TO_BE_REPLACED

“We have such an amazing core crowd since starting Sounds Like, and I cannot wait to get back together with everyone both new and old “– Trent Cantrelle

There is a level of anticipation that builds each year when a club or party returns for a fresh season. On May 10th the anticipation ends in Los Angeles with the return of the Sounds Like Terrace. Anyone with a passionate affinity for house music is naturally drawn to the unique atmosphere of a terrace party, and the 2015 Sounds Like season will continue to provide an exceptional vibe with top quality rhythms for the coming months. 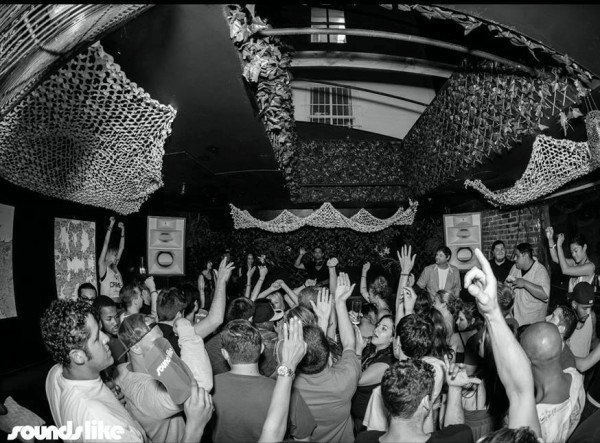 An enthusiastic crowd grooving at Sounds Like last year

The 2015 Sounds Like Opening will feature a special back-to-back with Doorly and Sounds Like founder, Trent Cantrelle, alongside J.Sanders for what is sure to be a memorable season opener. The music is always at the core of an event, but Sounds Like takes things a step further each season in searching for a venue that is appropriate for the vision and ambiance of the party; and from the teaser photos it appears that this specific terrace is perfect for the occasion. Drawing inspiration from it’s inception at Avalon and the DC-10 Terrace in Ibiza, Sounds Like has grown into a special summer party that Los Angeles looks forward to year after year.

In preparation for the opening we’ve caught up with the Sounds Like visionary, Trent Cantrelle, to talk about the history of Sounds Like as well as what to expect for the upcoming summer season.

How’s it going Trent? We’re all looking forward to the Sounds Like Opening next week. How long have you been doing the party?

It started around 2008 as my residency night at Avalon here in LA. Some of the first nights were with Booka Shade, Lee Foss, and Droog. We then branched off into Miami where we hosted the front lounge for DJ Mag at the Shelbourne on Thursdays during WMC. The label started around the same time and featured some early works by now house music sensations Pirupa and Jaceo.

What was the inspiration to start the Sounds Like Summer Terrace?

Around the end of 2012 you could start to feel that shift happen in music once again. I started rethinking how to bring back something I was missing from the Avalon days. I teamed up with Kimberly Roussel the owner and creator of one of the longest running music venues in the city, Cinnespace, to bring back Sounds Like events at her club. She brought a whole other element to the nights by curating performers and changing around the venue in unique and creative ways. After a string of one off’s we both wanted a bit more from the experience and decided to host a weekly Sunday terrace style party on the smoking patio of her venue. The only other time a weekly was hosted in this room of the club was Dubstep Sundays where a very early Skrillex played each night. To do what we wanted required a complete overhaul of the patio to be the “terrace” vibe we wanted. Building a custom DJ booth modeled after the DC-10 terrace booth in Ibiza was the most important piece to making that room fit for the party we wanted to create.

The new venue for the 2015 season looks beautiful. Can you tell us a little about how you settled on this location?

It was a venue we looked at a while back as another option to throw events. We both thought it has such a similar vibe to our previous terrace. After Kim sold her club we knew we needed a new home if we were to bring back the terrace. Once again we will be creating our own DJ booth build into the club for the summer season and installing a 4 point Evo Function One series.

It’ll be a long season throughout the summer with Sounds Like going from May to October. What do you enjoy most about hosting a weekly party?

Getting to play weekly is unlike any other experience. It was the way I DJ’d in my hometown of New Orleans for many years. You can try so many new things and go so many places because the crowd trusts you. They want to go those places with you because of the bond built over those weeks. We have such an amazing core crowd since starting Sounds Like I cannot wait to get back together with everyone both new and old.

Who are some of the guests that will be making an appearance at Sounds Like this summer?

Happy to say we are kicking things off with my homeboy Doorly who is crushing it around the globe this year. The rest you will have to wait and see…

We’ll be waiting patiently and looking forward to the opening May 10th! Thanks for the time Trent.

So there you have it. Sounds Like is back for another promising season, and with Trent Cantrelle at the helm it goes without saying that Sundays are about to reach a whole new level this summer in Los Angeles. Make sure to sign up for guest list or purchase pre-sale tickets to join the festivities…after all there’s really nothing like a proper opening party on a terrace.

The latest from the lab of Trent Cantrelle, Smile in the Future, is set for release on Sounds Like Records via Beatport Thursday, October 30th. This deep house cut showcases a darker and moodier side of Sounds Like with a nice synth riff that will leave you hypnotized.

Since last June, Trent Cantrelle has made a relentless effort to push the Sounds Like brand through his weekly Sunday gatherings (Sounds Like Sundays) setting new standards on how LA party goers cap their weekend. The event which has been going for its second season shows no signs of slowing down with their recent move to Project Club in hopes to further expand the sound and vision of Trent Cantrelle.