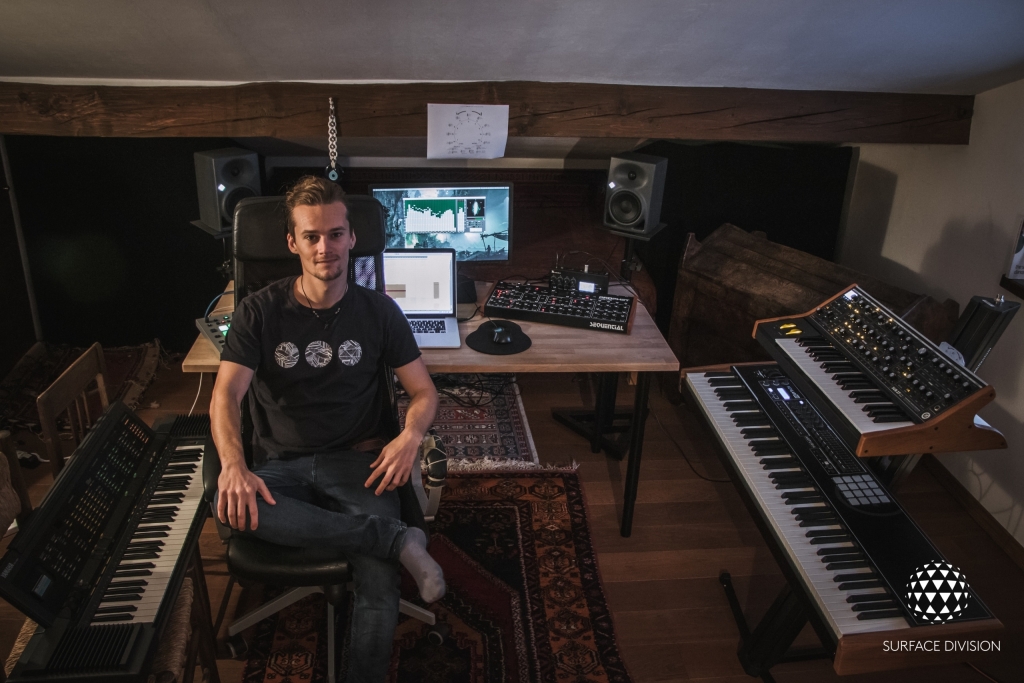 Coming from the Austrian Alps, Simon Meusburger has been a member of the electronic music scene since 2013 with his psytrance alias Loxias. After touring the world as Loxias, Meusberger is excited to debut his new melodic techno live project Surface Division.

Surface Division pairs electronic sounds and audio-reactive visuals to create a multisensory experience guaranteed to delight and energize the audience. Surface Division delivers a dark, yet melodic EP, blurring the lines between house and techno. The three original tracks invoke a mysterious atmosphere that leads to elevating drops, and crystalline sounds that play with a catchy synth and a deep bassline. In addition, the EP includes two additional remixes by Sacred Lines and Tiree Automatic.

6AM caught up with Simon to discuss his new EP as Surface Division. Check out the interview and listen to the Open Space EP below.

Thanks for sitting down with us. What have you been up to lately apart from creating your new EP, Open Space?

In the last few years, I have studied multimedia art with an emphasis in audio production. I’m still in my Master’s degree, just need to finish the thesis and then I’m done. Besides that, I spend most of my time in my studio working on new projects.

Tell us a little bit about yourself. What first got you into music, and how long have you been DJing and producing music -what came first?

Music has always been one of the most important influences in my life. I always went to schools with special education in music and creativity. When I was 16, I discovered DJing and immediately bought CDJs and a Mixer and learned how to DJ properly. A few months later, a friend introduced me to FL Studio. I was hooked.

Although many things are similar, techno has more space for creativity. That’s also why I called my EP Open Space.

Surface Division is a marked departure from your other psytrance musical project, Loxias. What prompted you to create a new identity for this work?

I felt like I had to move somewhere else with another approach to making music. Although many things are similar, techno has more space for creativity. That’s also why I called my EP Open Space.

Who have been some of your creative influences as Surface Division?

Hard to decide, as I’m really open to new stuff and influences. But at the moment I’m really into Woo York and their approach to making incredibly deep and hypnotic, but also uplifting and grooving live sets.

What feelings do you hope fans take away from hearing your new Open Space EP?

What can people expect if they attend a Surface Division performance?

When I’m playing a DJ Set you can expect a mixture of Surface Division tracks and some of my favorite new tunes within the genre. Always sending off a strong dancefloor vibe and a trance-like state over the whole set. When I’m doing a Live Set, I play Surface Division tracks only. There’s also an option of audio-reactive visuals, created by my creative partner.

Did you encounter any struggles when creating this project? How did you work past them?

I think there are always struggles when creating a new project. Something doesn’t turn out as you imagined, some things are simply not possible at the time. But there is also always another solution, a plan B so to say.

From when you first started to now, what has been one of your greatest lessons you want to instill in other artists?

When it comes to producing, my most important lecture would be to create an acoustically well-treated listening environment. A space where you can trust your ears.

When it comes to networking, find a place where other creative people are coming together. You can learn from them, talk to them and find out one or other hidden clues.

Thanks for the interview.