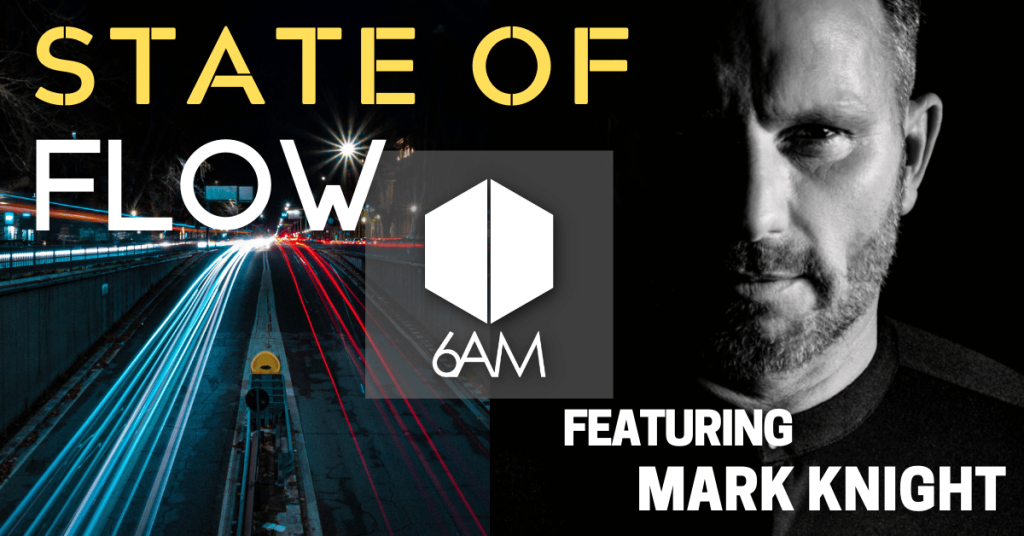 “Flow” is a scientifically recognized state of mind where a person is completely focused and immersed in what they’re doing- All time seems to stop, the whole world seems to disappear, and the person is performing and creating at their peak levels. Top performance athletes, engineers, and especially your favorite music artists all try to do whatever they can to achieve the State of Flow. Although everyone has their own method to achieve “flow”, factors such as creative workspaces, learning beyond their craft, physical/mental well-being, feedback/self-evaluation on work, and resting time- help all artists create their best work.

In this installment U.K house producer star, Mark Knight shares with 6AM how he achieves key factors to get to a State of Flow when it comes to projects like his recent release Daddy Shhh that released on September 23, 2022 on Toolroom alongside Crusy, and his next upcoming single The Music Began to Play alongside Armand Van Helden that will also debut on Toolroom Records on October 7th, 2022. Both singles are available to purchase through Beatport.

How Mark Knight Sets Up a Creative Inducing Workspace

I actually have a couple of studios, one at the office and one in town, and honestly, I rarely use the office one, even though it’s way more convenient. I really enjoy the process of heading somewhere completely different to make music — if I do it in the office, I’m in a different mindset, and usually get interrupted quite a lot for label business. And actually, that can be quite appealing if you’re struggling with something in the studio, to go and deal with something else instead. But it’s just not conducive to being creative. So I always love going somewhere where the sole purpose of me being there is to make music.

“I really enjoy the process of heading somewhere completely different to make music.”

Change your scenery when it comes to finding inspiration.

Listen: 6AM In Interview: Mark Knight on Returning To His House Music Roots

6AM · 6AM In Interview: Mark Knight on Returning To His House Music Roots

I’m pretty obsessed with sports and fitness training — I’d say on the same level as my music obsession. I dedicate probably 2-3 hours to it every day. I have to be very organized with my time to be able to fit it in, but I get so much from exercise and being competitive. I feel energized and refreshed, and when I’ve had that time to myself I feel completely happy giving myself up to whatever the rest of the day entails. Even if I get injured, which does happen, I do my best to push through it and find it really hard if I have to stop even for a few weeks. You can always find time to fit it in if you’re organized and motivated.

Football, pilates, gym, off-road biking — basically anything that gets me out of the house and works up a sweat! There was a time when I pretty much had to choose between a career in music and playing football really seriously, so that’s always been the sport I love the most. But I just love pushing myself and competing, and also doing anything with my son — I get such a buzz out of that.

How Mark Knight Maintains Positive Thinking And Mental Well Being

Fortunately, I’m lucky that I’ve never really suffered from mental health issues, but it’s definitely an issue in the music industry. You see people burning out a lot. I think one thing that helps is fundamentally knowing yourself, being true to that, and not worrying about the unachievable stuff. For me, I know I’m never going to get booked to play Berghain, so I don’t stress about trying to achieve it. One thing I’ve definitely learned is that my most precious commodity is time. You have to find balance in everything you do, from work to family, to hobbies. When that balance goes out of kilter, that’s when you can suffer. As I’ve got older I’ve been better able to manage my time, which has massively helped.

I’m lucky that I’ve never really suffered from mental health issues, but it’s definitely an issue in the music industry. You see people burning out a lot. I think one thing that helps is fundamentally knowing yourself, being true to that, and not worrying about the unachievable stuff.

Although not easy, trying to focus little on the negatives can be a step towards mental healing.

How Mark Knight Lets Himself Rest And Not Over Work

I genuinely love being busy, so it’s not really something I think about too often. I guess I switch off a bit to watch a football match or go to the cinema now and again, but other than that, I thrive on having a full diary and a busy life.

Before we even started, we went out for dinner and just talked about music. We’re a similar age and came from very similar musical roots in terms of what we grew up listening to, so that was a great starting point. After dinner, we went back to his house and he has this incredible selection of music videos — he’ll go out and VJ occasionally — so we watched some of those and then just started playing each other a load of tracks. So we spent a whole night getting to know one another’s reference points and passions before we even started talking about what we were going to do together. Then the next day, we switched the computer on and it just flowed so naturally. Sometimes when you collab with someone for the first time it can start out a bit awkward, but this just went so well. We ended up writing four tracks in a week!