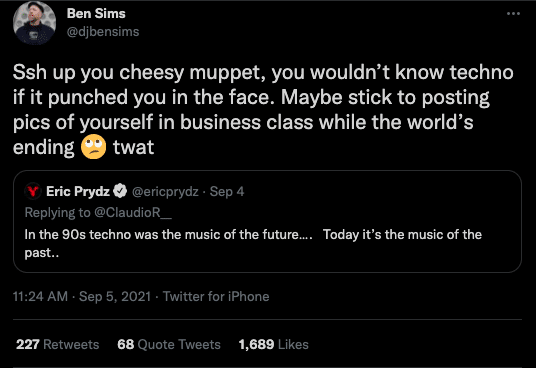 Techno has become somewhat of a golden egg. Originally a genre spawned from “underground” rave culture, it has taken a stronghold in today’s electronic music landscape. You may have heard of the term “business techno” as techno seeps into the mainstream. However, everyone’s definition of “underground” house and techno varies. It’s an ongoing debate and as music trends come and go, musical tastes will vary because people’s perceptions and interpretations all differ. Well-known electronic music producer Eric Prydz and techno heavyweight Ben Sims have each shared thoughts on techno’s evolution.

Let’s set the scene. “In the 90s techno was the music of the future…. Today it’s the music of the past..,” said Eric Prydz in a Tweet. He also pointed out techno from the last 15+ years is inferior to techno from 1990 – 2004. Is he right? That’s up for discussion, but that’s not where the buck stops. Ben Sims had a word or two to say to him:

“Ssh up you cheesy muppet, you wouldn’t know techno if it punched you in the face. Maybe stick to posting pics of yourself in business class while the world’s ending Face with rolling eyes twat.”

So, who’s right? Is there a right? Everyone is entitled to their own opinion and there will always be more underground to the underground. Music genres go through this type of discussion all the time. Something gets popular, so there’s potential for money to be made. Elements of a certain genre and its scene can remain underground but others float to the top and welcome a new crowd. It’s what’s fresh, new and hot. Is it “bad” or “wrong”? Again, it depends on who you ask. Answers might differ between a techno purist and someone who’s trying to make money with their art. Going “mainstream” isn’t inherently “bad” as it creates more opportunities for a respective community.

“Hype is always just hype because there is a mass of people liking this ‘thing’ at the moment. Let’s see what’s going to happen next. […] how the taste of music in a bigger audience [changes] and then we’re going to see what’s going to happen to techno. Techno itself as a genre and music style will always be there. It’s the kind of genre that’s constantly developing and evolving. You can see this in between the last five to six years. Techno became super hard again very acid-driven. Stuff that has always been there but in a new costume.”

Here are two well-known DJs in the techno space but with a totally different take on the industry. Ben Sims is popular but isn’t necessarily regarded as a “mainstream” artist whereas Eric Prydz is. Prydz has different aliases allowing him to market himself in multiple environments and crowds. The Baron of Techno Dave Clarke shared his perspective on the Twitter feud between the techno artists via a Facebook post:

“A few days ago people were dm’ing me to get involved, but I didn’t see much of a point as guardian of techno (and the only person I have ever seen convincingly rock 3 vinyl decks consistently) Ben Sims dealt the blow and from the heart swiftly and humanely (considering).

I will say this though Eric is not wrong, but only not wrong from his context. Eric will only play at exceptionally commercial events and the “techno” he will view is formulaic, lack lustre and not what myself or Ben would call Techno. The problem is not Eric Prydz, a person who (for those here that are unaware of his existence) became famous due to a video of aerobic butts shimmering to a worn out cliche of a groove, but what “Techno” is now. He refers to what people in the general public think it is as he is part of that same demographic but with a longer history. Until “Business Techno” is not seen as the true heir to the techno heritage this will always be a problem, but there is way too much money involved which turns people , way too many venture capitalists involved. 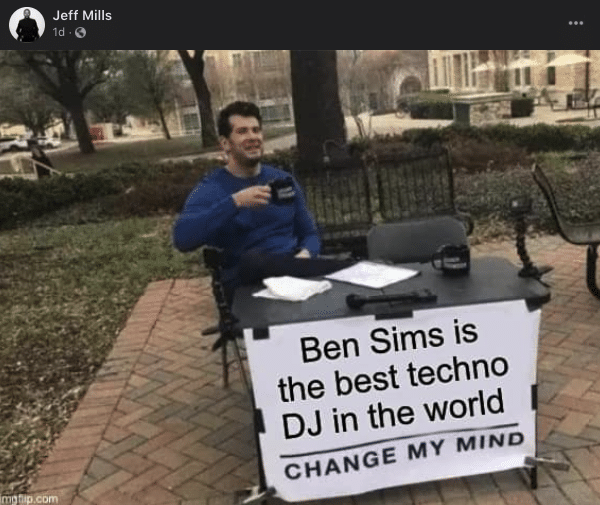 While Sims and Prydz will agree to disagree, can we all just agree on one thing: dance to what you like.

Make dope music / listen to music YOU like instead of engaging in debates about who’s more underground / more cheesy, who cares! Coexist! Help and educate and learn from each other! Tmw you could be dead, live & love a little ffs