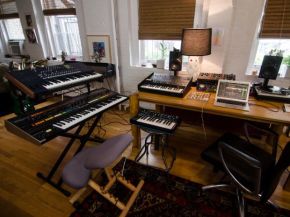 Boston-based duo Soul Clap, consisting of DJ/Producers Bamboozle and Lonely C,  has been pushing boundaries since 2001. Their blend of house, tehno, disco, funk and soul music renders them a vital component of an American dance culture that has been forced into the underground by a watered-down plethora of cliche ‘festival bangers,’ colloquially known as ‘EDM;’ this is ultimately manifested in its dissemination by gluttonous corporation and patronage of pretentious bottle-service socialites, resulting in a homogeneity across a number of genres as producers strive to fit the so-called ‘EDM’ mold. Soul Clap provides a breath of fresh air amidst the disheartening consolidation of a once-beloved industry, demonstrating that ‘proper’ dance music is far from dead and will never fall into obscurity.  Their eclectic, yet cohesive style is largely due to the abundance of both hardware and software synthesizers, crafty utilization of Ableton Live, and some outboard FX gear. While emphasizing the importance of incorporating older and newer hardware, Soul Clap also feels that it is important to embrace software technology to drive the evolution of music. They have stated time and again that making great music doesn’t require a fancy studio – just a creative mind. However, they both admit that working in a fancy studio certainly makes the process both fun and efficient. Our favorites in their collection are the Roland Jupiter-8, Korg MS-2000.

Click here to check out the photos and interview, courtesy of MusicRadar