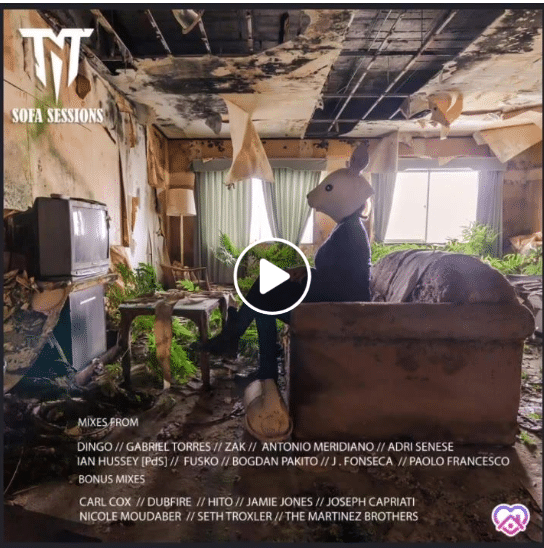 The ripple effects of COVID-19 are being felt throughout the music industry. Not only are artists not performing and promoters unable to organize events, but tour managers, agents, technical and live crews, and other venue staff are also finding themselves without work. Now, a selection of tour managers — some of the dance industry’s biggest players — have come together to present “Tour Managers Not Touring (TNT) – The Sofa Sessions” with support from the very same artists they work for.

Simply put, over the next few weeks they will be releasing a series of exclusive mixes they have themselves put together, as well as previously unreleased mixes from the artists they work with. Supporters are going to be able to help the tour managers involved with minimum donations of €5 or more.

Read Next: What Music Managers Do and Where To Find Them

The tour managers and the artists involved are listed below.

The first edition of the series, which contains 27 podcasts = 31+ hours of unreleased music, is available now here.

“The tour managers in our scene are like one big dysfunctional family. A lot of tour managers play themselves and have great musical taste. So we thought this would be a great way to come together, and an interesting concept to explore the sound of the tour mangers in comparison to the sound of the DJs we work with. Our goal is to release some new and interesting content to help with the #stayhome initiative and also try and gain some financial support for us tour managers during this unfortunate time as most of us if not all are not paid a salary, we are paid per show. This project is being done out of love of music, our scene and the people involved in it.”

All the artists involved have been supporting the project, with most if not all taking to their social media to enlist the support of their fans to donate to their tour managers. Below is an example of Seth Troxler’s Instagram post, where he specifies that his current Tour Manager isn’t involved and that he is taking care of him.

More mixes Monday. Check out @tntsofasessions .Tour Managers Not Touring. There’s a bundle of exclusive mixes from the scene’s best tour managers (and all fantastic DJ’s and music heads), plus unreleased mixes from myself and the DJ’s they work with (@carlcoxofficial @themartinezbros @jamiejonesmusic @pacoosuna @josephcapriati @dubfire @alanfitzpatrick @nicolemoudaber @hitolove ) My current tour manager is not involved but I want to help all our electronic music community This huge release is on their Bandcamp right now. #stayathome

The move has resulted in some controversy, with some fans as well as peers questioning the need for tour managers of these specific artists, all of whom demand a more-than-modest fee, to ask for donations.

Producer/DJ John Askew went so far as post a video about this, sharing his opinion on what he thinks is a scandal.

Read his full statement and watch the video below.

THIS. IS. AN. UTTER. SCANDAL. Out of desperation for income in these trying times the tour managers of some of worlds richest DJs launch a mix series to try and raise donations from the public to help keep themselves afloat while out of work. And then the millionaires they work for have the audacity to beg and plead to the general public to get involved / donate give money I’m guessing so that they don’t have to themselves!!!??. What the actual fuck???????? So the DJs in question are not covering the basic costs of the loyal warriors that baby sit them 24/7 during normal touring periods????? And not only that but they’re then asking you – the out of work / broke / skint general public to put your hand in your pocket to help cover these costs – so they don’t have to??????? Am I loosing my mind here or did what I just watched actually happen? I’m truly lost for words, shocked and a little sad. Shame on the managers who advised these DJs that this was a good idea. Some of these DJs were heroes to me but now any / all respect I had has been lost. If you are one of the tour managers who work for the DJs in this video I feel deeply deeply sorry for you. You’re at their side wiping their ass every second of every day while on tour and now they won’t repay the favour by helping you with a few chunks of change from their VAST wealth????? It’s as scandalous as Victoria Beckham trying to furlough all her staff so that the tax payer could cover their costs. Luckily though – she saw sense and reversed the request when public outrage subtly reminded her she’s a fucking millionaire a hundred times over so can cover those costs out of the coins in her solid gold handbag. This lock down brings out good in some but horrors in others. If you’re going to donate to anything – donate to the NHS or your own country’s front line medical services.

The subject of this article received a lot of attention this week with a lot of industry peers and fans alike chiming in on this hotly debated subject.

It appears that the “Tour Managers Not Touring (TNT) – The Sofa Sessions” project itself has been pulled since the writing of this article. Please note that what we reported what was sent to us as part of an official press release, so the information contained in this article is 100% accurate and, as they say, “straight from the horse’s mouth.” In this case while the horses are definitely the Tour Managers involved, it remains questionable whether the DJs who donated their mixes knew exactly what was going on and what the mixes were being used for. Some claim they didn’t know, but that still raises several questions including and most importantly relating to licensing and copyright violations.

Given the backlash generated by this initiative, we feel it’s important to add the response of the various DJs involved. Please note that while we cannot confirm nor deny that the DJs knew of the true nature of the TNT initiative, we must stress again that the press release we received does indeed confirm that the initiative aimed to financially support these Tour Managers.