Slingshot is a Growing Part of The Worldwide Narrative in Music 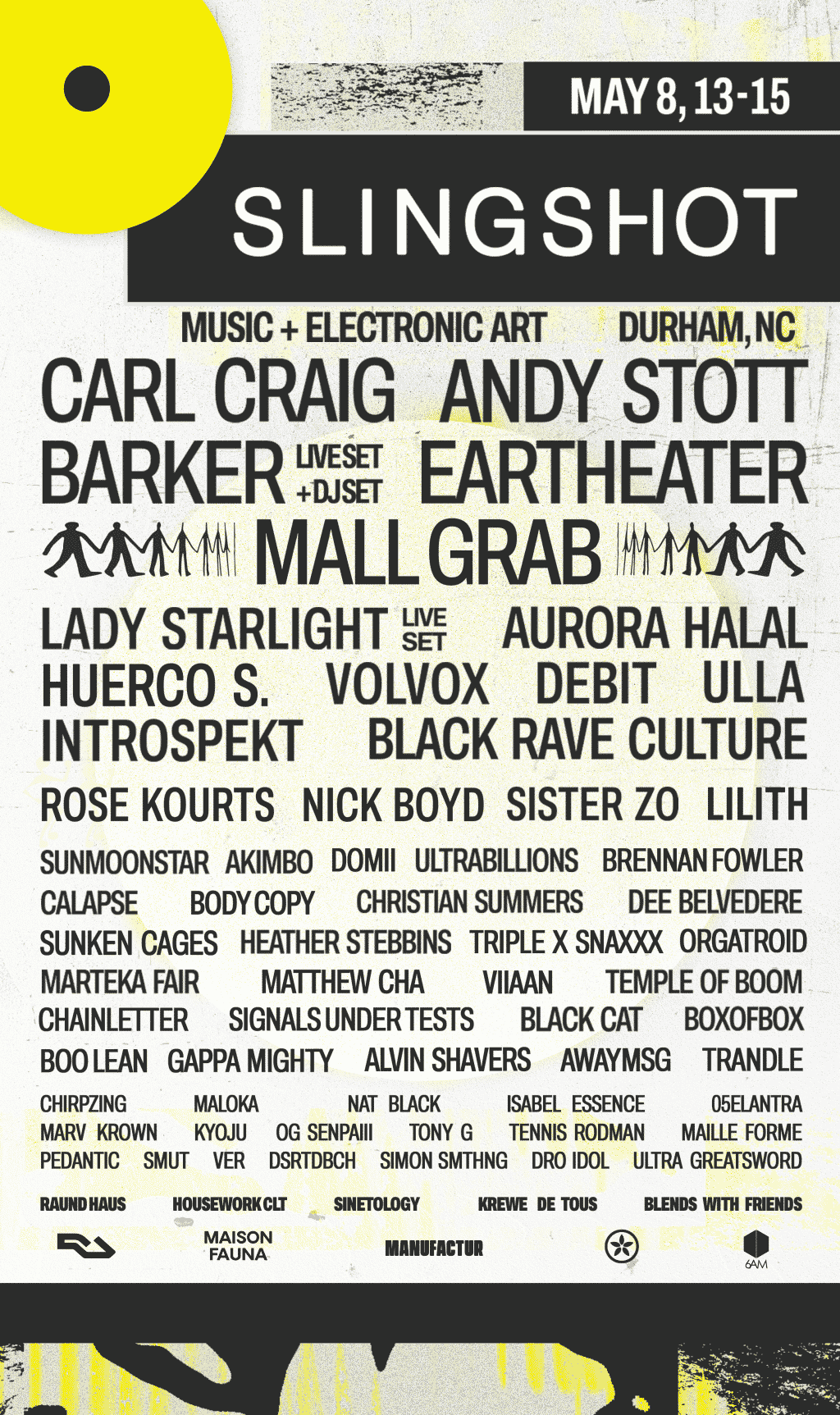 Slingshot is a Growing Part of The Worldwide Narrative in Music

Slingshot, the international nexus for music, electronic art, and technology in the South, has moved from Athens, GA to the up-and-coming music hotbed of Durham, NC, with two events slated for 2022: May 8, 13 and 14, and October 7-9. Dozens of artists and collectives will convene to showcase their work in a setting that has become a signature of creativity in the South. Over the years, Slingshot has hosted dozens of notables such as James Murphy, Jamie XX, Holly Herndon, and dozens of sound and visual artists from many corners of the globe. 6AM talks to the Slingshot family about what to expect from the festival and its new location.

Hello and thanks for talking to 6AM how’s everything going over for the Slingshot family at Durham, North Carolina?

Really wonderful, actually. We’ve got a solid Durham (NC) based team between Slingshot, Maison Fauna, Manufactur, and the Fruit. It’s been really great having so much “in-house” under one roof. It also doesn’t hurt that we love the same artists. Curating the event has been an absolute blast – and sometimes a rollercoaster, like when we booked Mall Grab very last minute this past Wednesday.

Speaking of Durham and Slingshot, Slingshot recently moved from Athens, GA. What was the reason for the relocation to an entirely different state?

Ha, well, that’s a bit of a long story, but the short version is Kai Riedl (Slingshot’s founder) was basically poached from his own festival in Athens by Moogfest! They made him an offer he couldn’t refuse. Kai was an executive producer of Moogfest in Durham for four years and in addition did some really forward-thinking curation as well – particularly for the area! I remember he booked many artists before they were household names in 2019. Over the pandemic, Moogfest went on indefinite hiatus, and we felt the area needed a cultural event like this, so we revived Slingshot!

Is there an already established electronic music scene in Durham? Or are you guys on the forefront of its growth?

The burgeoning music scene in Durham is one of the big things that attracted the entire Slingshot team to the area. The Triangle (Raleigh, Durham, and Chapel Hill) definitely was (and is) one of the southeast indie rock capitals, with Cat’s Cradle, Merge Records, and Red Eye all calling it home. In the context of Moogfest, Hopscotch, labels like Raund Haus, and bands like Sylvan Esso, people slowly started to realize over the last 10 years that there was a burgeoning experimental electronic music scene in addition to already thriving underground dance music and hip hop scenes. The latter two date back to at least the 90s! It’s also a very queer-friendly area in what was traditionally a red state. People are often shocked by this when they visit for the first time. There are so many scenes and crews in the area, I feel like we learn about a new one every month! Some of the ones that we feel like are really organizing and trying to make things happen in Durham (and the Triangle at large) are Raund Haus, The Conjure, Party Illegal, The Floor, No Visa, and our label, Maison Fauna. That’s honestly just the first ones that come to mind, and I apologize if I left anyone out that’s shaking it up and bringing something new to the table – in fact, I look forward to seeing those parties!

The Fruit is a venue that is super important to each of the crews I mentioned. It’s a huge warehouse that is also hosting three out of four stages at Slingshot Fest. To answer your question, Slingshot and Maison Fauna are definitely trying to push the scene’s growth by bringing our own personal experience, ideas we’ve seen in our travels, and our personal curation to the table. Since 2008, I’ve been throwing raves and working with record labels (Owsla, Dirty Bird, and even Capitol Records) as well as music festivals (Hard Fest, Coachella, and Form Arcosanti)  with my agency cofounder, Matthew Bowers, in LA. Kai has more than a decade of experience throwing festivals like Slingshot and Moogfest. His connections to the worldwide art and music scene run very deep. Sarah and Simon were throwing warehouse raves with the likes of Theo Parrish shortly before we met. Their taste and talent are both dizzying.

Basically, we have our own specific vision to achieve our goals, which are also unique to what we want to see in the world (and in Durham specifically). People thought I was insane when I invested in our first sound system, but it was so very needed as we’ve already seen. It’s important to hear this music on a sound system that can overwhelm your senses without destroying your ears. We’re also planning to open a record store inside our venue. This is important for world-building. These are all things meant to enhance our scene – not take ideas that exist in other places and drop them here without context. We are also trying to grow the pie rather than seeing the scene as a zero-sum game with winners and losers. In the grand scheme, we hope that our goals align with feeding this scene that we love and protecting the queer safe spaces that could get pushed out if the city decides to expand and grow in a shitty, tone deaf way.

“Basically, we have our own specific vision to achieve our goals, which are also unique to what we want to see in the world (and in Durham specifically)”

Is there anything within or about the Durham/NC electronic music scene that is unique to Durham/NC?

It’s incredibly diverse, queer-friendly, and the talent is mind-blowing. And people dance. That’s one thing we tend to take for granted here – like, of course you dance at the rave, but when we bring artists from out of town, they’re almost always like “Wow. That was amazing.” For us, that’s every Saturday, and we do realize we’re super fortunate. One of the things that I love is how people are not afraid to check out new things and mix genres together in this scene in general. Some artists will really surprise you with their range. I think of Oak City Slums and Treee City, for example. Either might drop a trap or footwork song today and a techno banger next week. You never know with those two. And I love that. Grrl lives here, and they’re almost like this secret celebrity who tours around the country playing amazing parties (I just saw today that they’re debuting at NYC’s Elsewhere in July). Then you meet a nonbinary artist like Chainletter who makes their own foley while they’re doing woodworking, and they may turn it into the ambient track of the year or a wild, industrial groover that sounds like something off Mord.

And that’s just the stuff in my purview! There is so much going on. It’s really such a cool, unpredictable scene with a lot of artists beavering away in secret to surprise you with an amazing EP drop or a ridiculous artist booking at this rad techno dive bar in Chapel Hill called Nightlight, and I’ve never experienced anything like it.

“We are also trying to grow the pie rather than seeing the scene as a zero-sum game with winners and losers.”

Slingshot is not just about music but also “electronic art” what are some prime examples of non music electronic art that Slingshot features?

Slingshot has a history of working with some top tier sound and visual artists – over forty five of them from over 20 countries. These works include spatial sound compositions, interactive installations, projections, performances, and more.  In the past, the sound artist Tristan Perich (known for his 8-bit symphony), visual artist Kota Ezawa, cyborg performer Onyx Ashanit, and more. For this May, we’ll be mostly focusing on music, but the October edition will bring many of these elements back to Slingshot.

What is the reason behind having a “more than just music” electronic based event?

Slingshot’s mission has always been to represent forward thinking creators across the board. Obviously, that leans heavy on music, but here in Durham, we’ll be offering a hybrid event that represents that intersection between music and electronic art more and more. For us the line between the two are constantly intermingling and creating some amazing results.

What do you hope your attendees will experience at Slingshot?

Let me start by saying that we go crazy on sound, and we are ramping up the light and video installations with support from our friends at Life Is Art. One of our sound systems is a unique, vintage d&b Audiotechnik system put together by George Stavro (Sonic Lab Audio/Integral Sound). He’s did the install at Sound in LA and has done both Coachella and BPM for multiple years. Suffice it to say, he’s pretty good, and this system is fantastic. We also have a vintage-maintained TurboSound Floodlight system by Matthew Cha up in DC. It’s amazing. We’re nerds about this stuff. Our goal is to put artists in the ideal context for them to have the best show possible. We want our attendees to experience that – artists taking complete control of the stage and room, and taking us all on a journey. A non-commercial fest seems almost counter-cultural in 2022, so I guess we’re contributing to the existing indie festival counter-culture in our own small way.

“Slingshot’s mission has always been to represent forward thinking creators across the board.”

What do you hope Slingshot will do for both the Durham electronic scene and the Global scene?

We look at this as both an escape from the usual grind that we all need and an open house where we get to host our favorite national and international artists, enjoy their art, and show off the mind blowing things being made in and around Durham (and the rest of the Southeast, of course) just about daily. The festival is twice a year, and the intention is to create this forward momentum of creativity, possibilities, and positivity that propels our music and art scenes forward. We keep getting messages and updates from artists that are burning the midnight oil working on their sets, visuals, and production, and it’s really inspiring to see artists you admire working so hard for an event you’re producing and curating. It’s the best feeling, honestly – just to be a catalyst for creativity and community in any way for a community you care deeply about.

As far as globally, we want to plug this story that we’re a part of into the worldwide narrative of music that’s happening right now. The more we can have these two entities converse and be aware of one another, the better for everyone involved.

“The festival is twice a year, and the intention is to create this forward momentum of creativity, possibilities, and positivity that propels our music and art scenes forward.”

We have admired 6AM for a long time, and we really appreciate you doing this piece. We feel inspired when we see lineups and shows like the ones you put together for Reform and your monthly parties like Work, and we can see the passion. So big ups, and thanks so much for taking the time to chat with us.

Read Next: Slingshot Festival Returns in May and October 2022