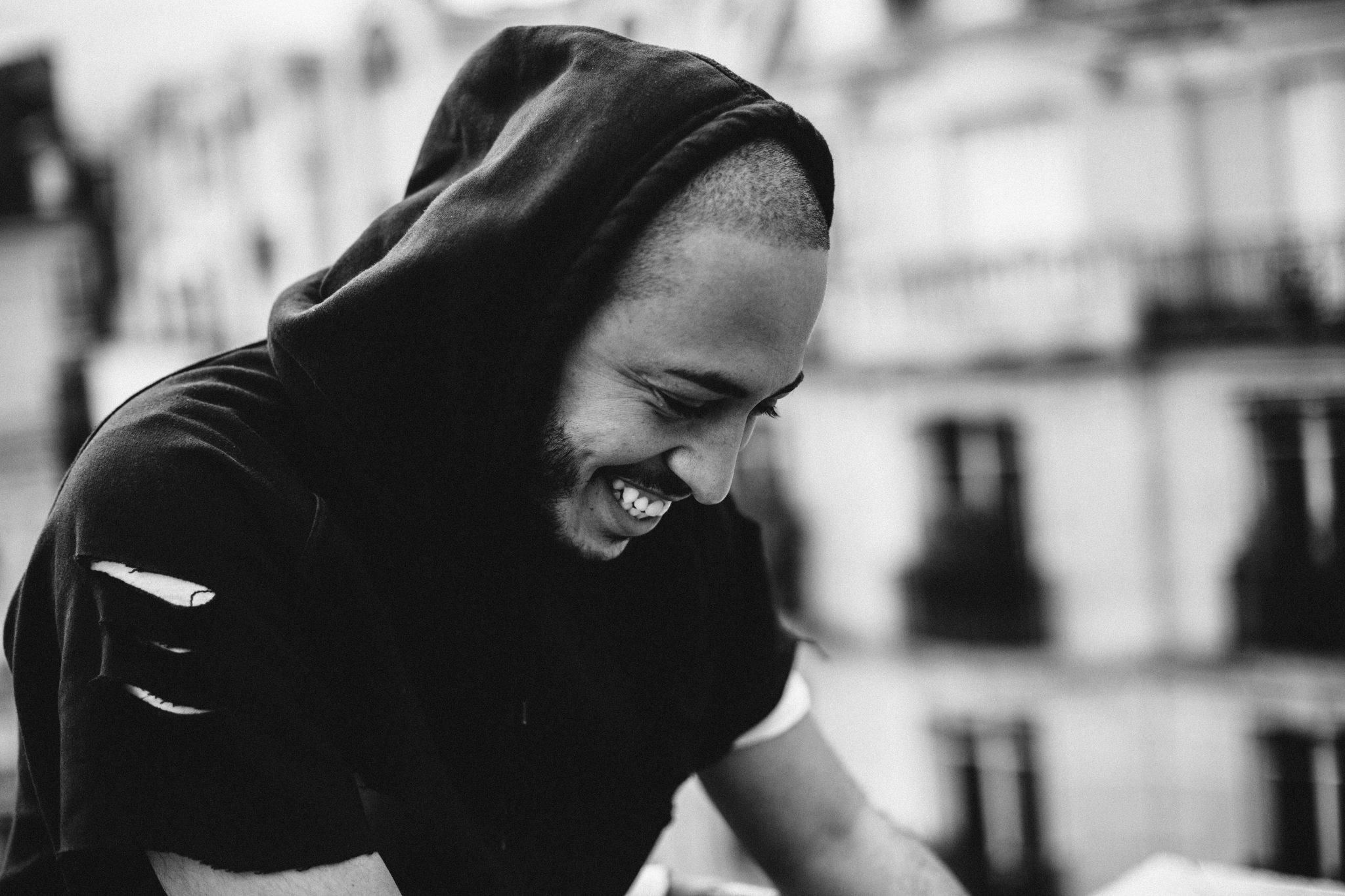 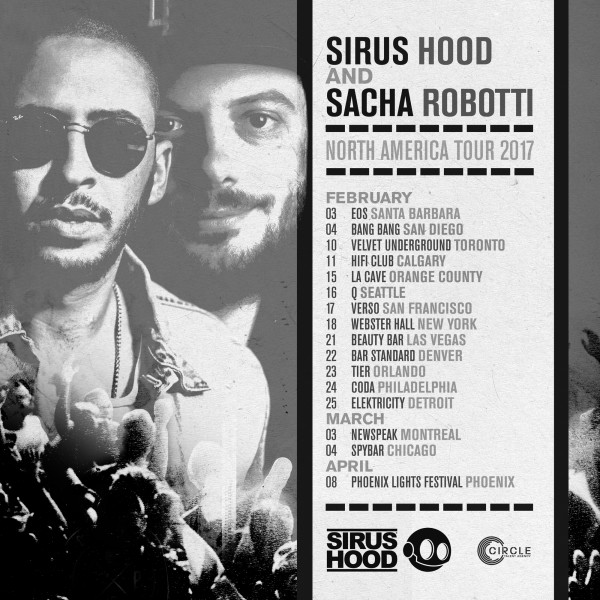 In the next coming months, Sirus Hood and Sacha Robotti will be embarking on a 16-stop North American tour beginning on the 3rd of February in Santa Barbara and ending on April 8th at Phoenix’s Lights Festival. In between, the two producers and DJs will visit some of the region’s best known venues, including Bang Bang in San Diego, Webster Hall in New York City and Spybar in Chicago.

Paris’ Sirus Hood has risen the ranks of the French and International house scene thanks to a sound that can be best described by the two main labels he releases on: CUFF and Dirtybird. The first is the brainchild of French ghetto-house movers Amine Edge & DANCE, while the second is the unmistakable global brand spearheaded by LA-based producer and DJ Claude vonStroke. While housed on separate sides of the world, the two labels have one very distinct theme in common: they get people moving and they get booties shaking.

Sirus prides himself on adopting that very same philosophy in his productions and DJ sets, a musical benchmark that has seen him grow in popularity both back in Europe and across the pond here in the States. His latest track — a collaboration with Roland Clark entitled “I’m House” — was recently featured on Dirtybird’s New Years Special Volume 2 compilation.

You can listen to it below and purchase it on Beatport.

We talked with Sirus to discuss how he first met the Dirtybird crew, his love for hip-hop, the legalization of weed in the States and more!

Welcome back to the States! How does it feel to be back?

Thank you! It feels so good, I’m so excited to tour here, every time was a blast, and no doubt that this tour will be amazing.

Your music is definitely inspired by sounds that vary from Chicago Hip-House/Ghetto House to classic NYC house music. Tell us about the first time you came to the US, was it what you expected?

Yes, I was definitely inspired by these movements. The first time I came to the US was in Miami with my best friend, I had in mind the GTA Vice City maps and it was surprisingly similar haha. It was one of my goals to come play in the States and I am so proud to have been able to tour around the country where the music that inspires me took place.

Your music is firmly represented by two record labels, Europe’s CUFF and the US’ Dirtybird. How did you first get involved with Barclay and the rest of his team?

The first time I met him was in Miami at a Dirtybird BBQ a few years ago for the WMC. While I was queuing up to get in, Justin Martin played one of my tracks, and I said at the door “They are playing my track, please can I get in to film !” And they were kind enough to let me in directly. I met Barclay on the stage where I introduced myself. And when I heard Justin playing a second track of mine, I went up to him and told him who I was, he got crazy and carried me in front of everybody haha. Since then, we’ve kept in contact. CUFF invited Claude VonStroke to a Showcase Paris in 2015 and we played b2b. After that I released 3 tracks on his label and I hope to do more with him. 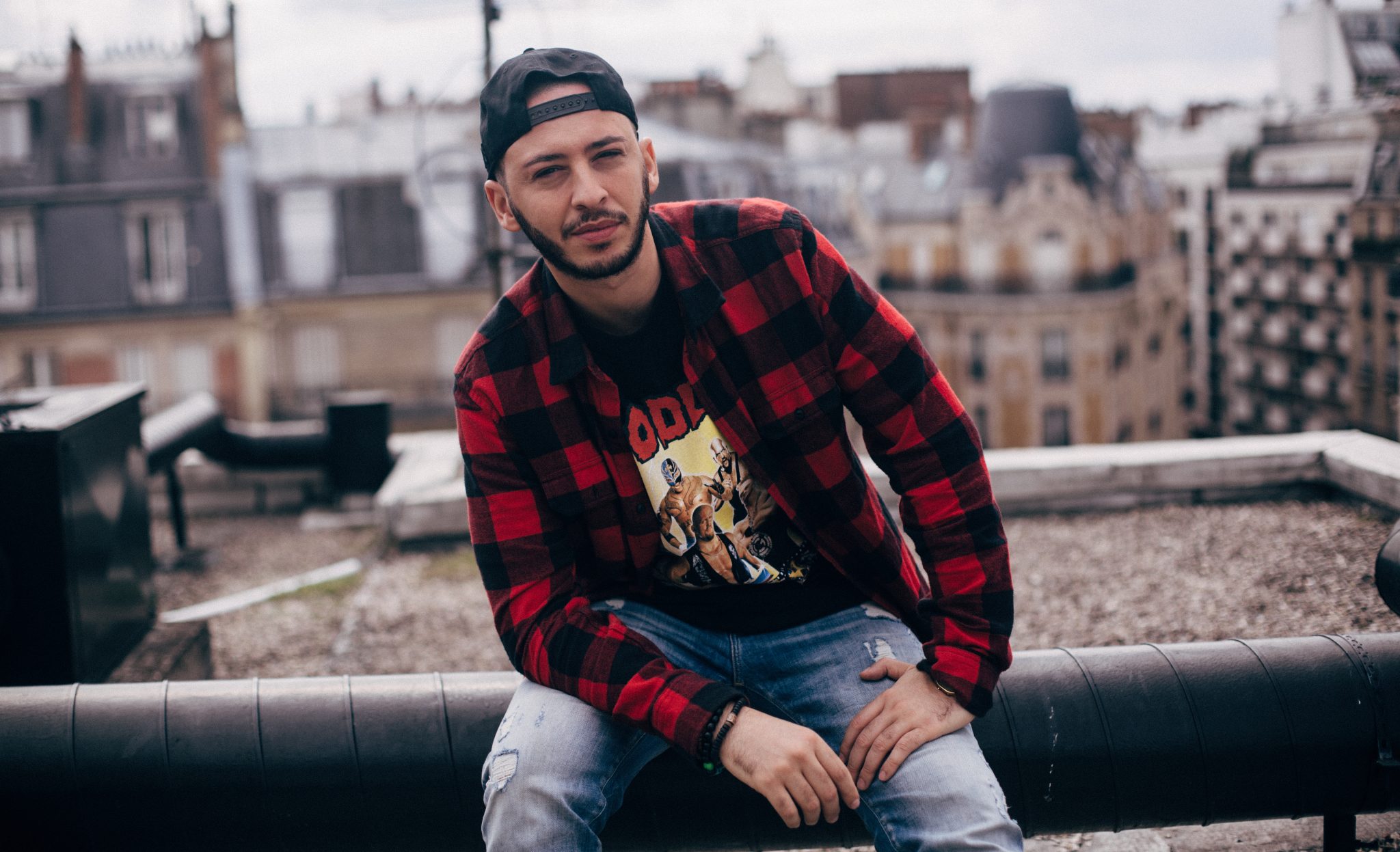 If you were to guess, how many booties did you get shaking in 2016?

Then there are the streaming booties, we need to find a very complicated formula in order to sum up all the plays on internet, on Soundcloud, YouTube and Spotify. Et voila! I would say a few million booties. Not bad

What was your favorite gig of last year? Why?

I can’t decide on one particular gig, but I can say that my favorites were : Truth – Joburg (South Africa). Ministry of Sound – London (England). Decks on the Beach, Beirut (Lebanon). Sankeys – Manchester (England) for NYE.

You’re about to embark on a huge North of American tour and I am sure you’re excited for each stop. Any specific club you’re looking forward to playing? 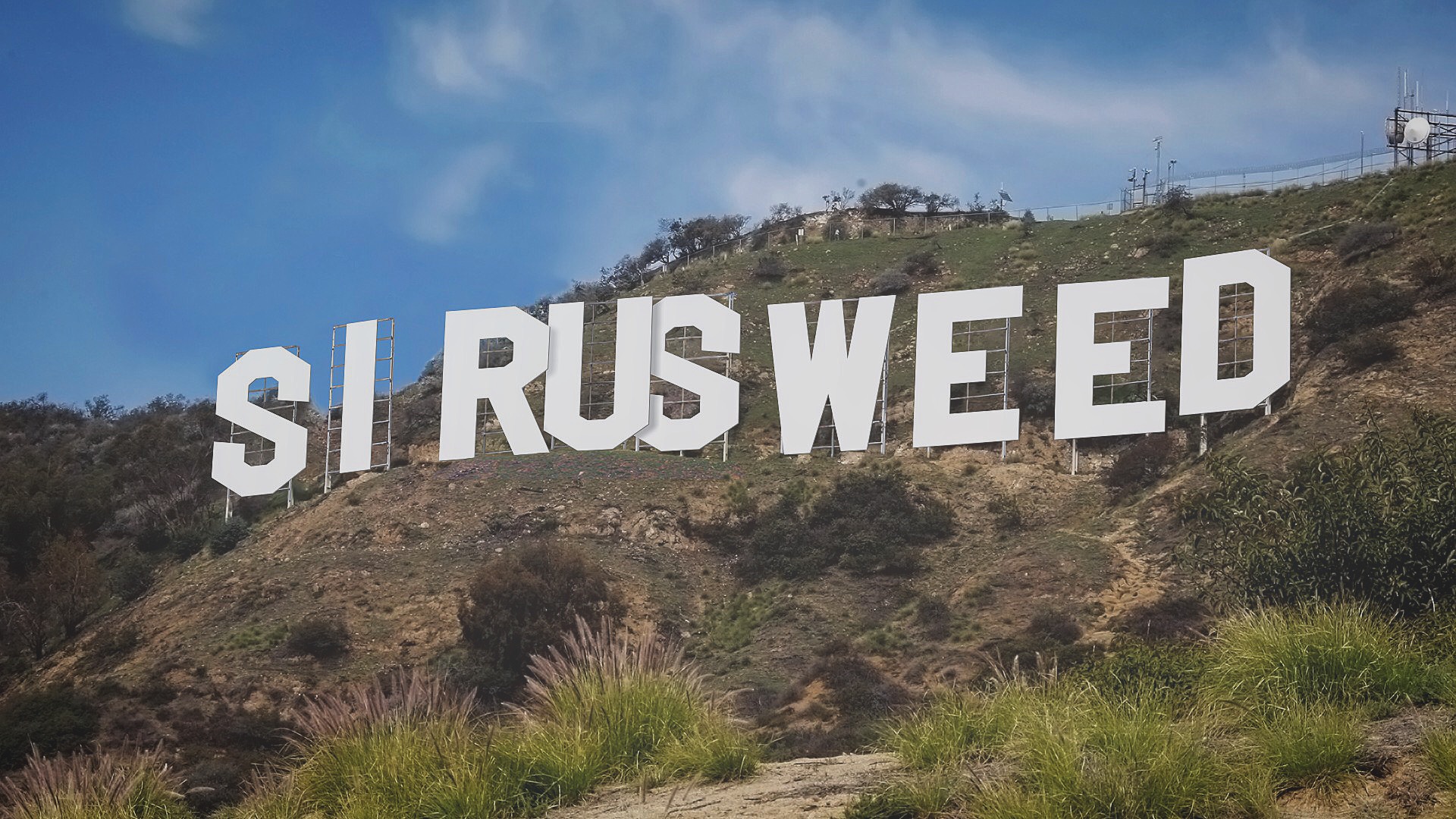 What do you think about the weed legalization movement in the States?

I think that any country that encourages liberty should enable anyone to decide what is good or not for him/her. Anyway, all form of prohibition never really worked, it actually elevated criminal activity. I hope that the other “free” countries will follow this example.

Who is your favorite hip-hop artist of all time?

I’m hesitating between Snoop Dogg, Dr. Dre and Biggie of course. With a slight preference for Dr. Dre because he is a music producer. 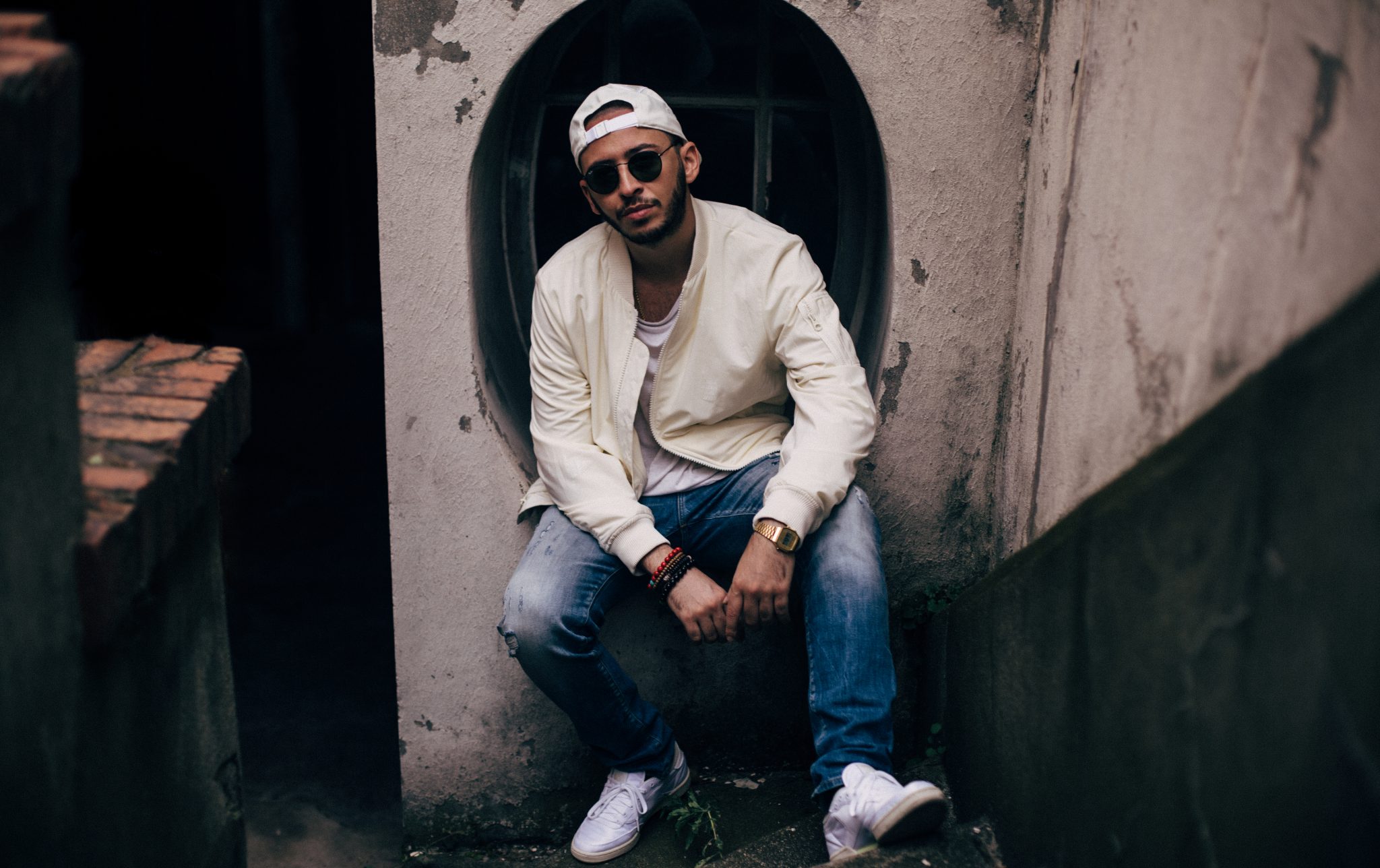 Ok next up I’m going to ask some rapid-fire questions. Favorite food?

What is your favorite 80’s jam?

Queen – I Want To Break Free

Hats in summer, hoods in winter

On FIFA, I always play with the Barcelona team

All photos by Justin Prinz