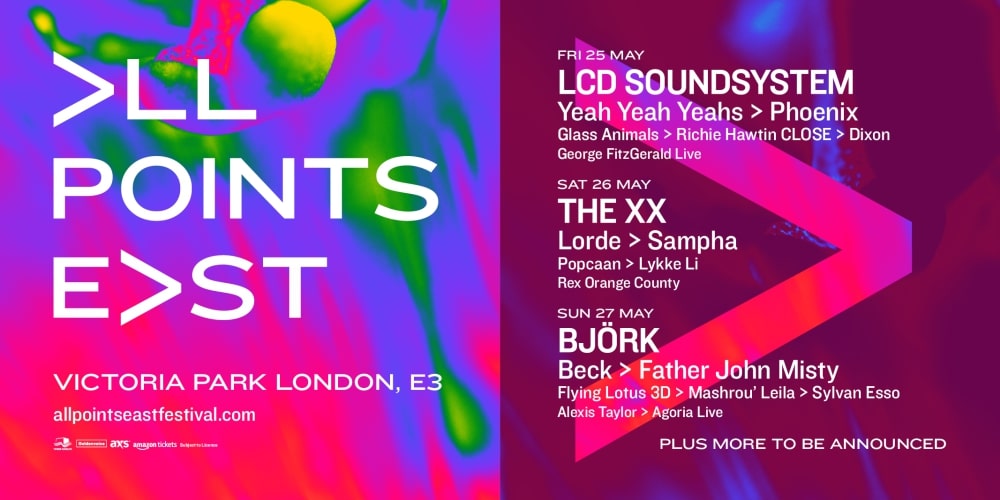 A music festival set to grace Victoria Park in London, England has unveiled the megastar artists on its lineup. The first installment of All Points East Festival (APEF) runs from May 25th-27th and will feature performances from acts across the music spectrum spanning the six stages.

Topping the bill for the first three days of the festival are The XX, Lykke Li and The National, in order of date booked. The APEF lineup features no shortage of electronic music on these days as LCD Soundsystem, Sylvan Esso and Glass Animals are slated to perform as well.

House and techno in particular receive ample representation on the APEF entertainment roster. Between performances by Dixon, George Fitzgerald and Richie Hawtin, a broad swath of the artists appearing on the first day of the festival fall somewhere within the tasteful stylistic range. The latter artist will perform one of his celebrated CLOSE – Spontaneity and Synchronicity stage shows before the former two acts close out the evening.

APEF is the brainchild of Coachella promoter Goldenvoice, which is itself an asset of U.S. live music conglomerate AEG Presents. “The council is pleased to be working with AEG,” said Tower Hamlets Mayor John Biggs, “who were selected following a rigorous procurement process to deliver some exciting events in 2018 which can be enjoyed by local people, Londoners and visitors from across the UK.”

Richie Hawtin’s electronic music career extends as far back as the late ‘80s – not far from the humble origins of techno in Detroit. Over the past three decades he’s made an undeniable impact on the genre. Alongside John Acquaviva he co-founded a record label called Plus 8 during the ‘90s which played no small part in championing “second wave” Detroit techno.

Hawtin debuted his CLOSE stage show last year during the 2017 edition of Coachella in Indio, California. By utilizing analog synthesizers and other live elements, he renders each execution of the stage show unique by improvising each performance in real time. An array of cameras will allow the audience to witness his creative process in vivid detail, and the resulting sonic landscape will ring out from the best speaker system ever installed for a live music event in Victoria Park.

All Points East Festival will announce additional headliners in the months leading up to the event. Tickets and other information can be found here.