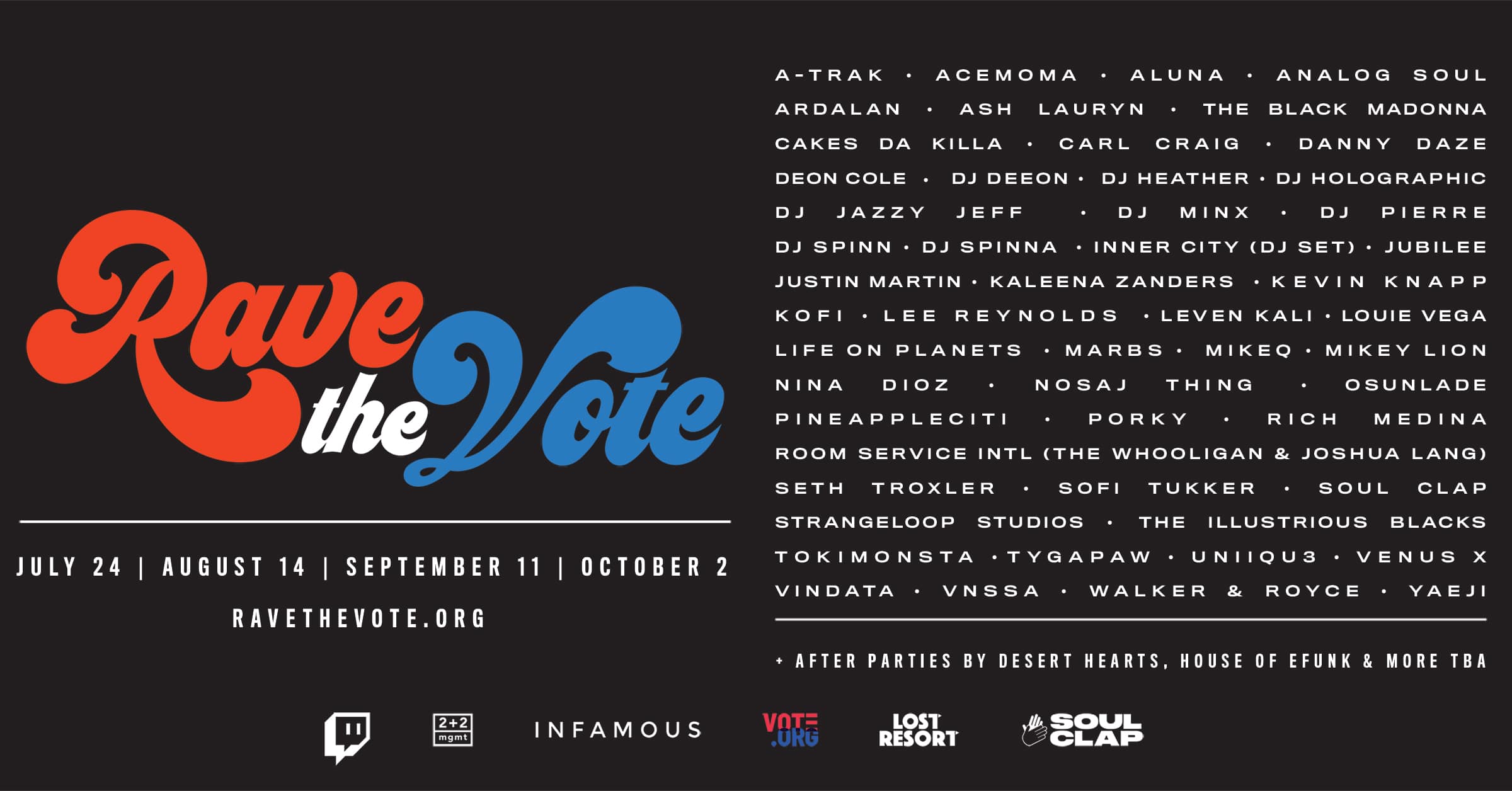 Today live streaming channel Lost Resort TV has announced the debut of Rave The Vote, a voter registration and fundraising digital event aimed to rally the dance music community around the pillars of change and unity. Broadcasting across four twelve hour episodes beginning July 24, Rave The Vote has gathered some of the most credible names in electronic music alongside outspoken community leaders with a shared ethos of motivating viewers to register to vote and donate to the Movement for Black Lives.

Rave The Vote 2020’s musical lineup has been carefully curated to represent North America’s deep dance music and hip-hop roots, a showcase of the continents most beloved stars and niche trailblazers alike. The result is a multi-genre billing that spans sound and era in the name of a better future.

Viewers will be treated to streams from some of the founding members of rave like Carl Craig, Louie Vega, DJ Pierre, DJ Heather, and DJ Minx alongside flag bearers of the next generation of house and techno The Martinez Brothers, Black Madonna, Seth Troxler, Soul Clap, Maceo Plex, Rich Medina, AceMoMa, and Ash Lauryn.

The pulse of the American tech house sound will also be on full display with sets from Justin Martin, SOFI TUKKER, Walker & Royce, Ardalan, VNSSA, Kevin Knapp, and more. After parties will be hosted by Desert Hearts and House of EFunk.

While Rave The Vote’s wide reaching lineup may act as its draw, it is the educational programming that aims to motivate the dance music community to turn up at the polls this November. The event welcomes conversations and PSAs from Recreation and Parks Commissioner of Los Angeles and Chief Strategist of CicLAviaTafarai Bayne, Executive Director of the Freelancer’s Union Rafael Espinal and Chair of the Los Angeles Democratic Party Mark Gonzales, with more guests to be announced.

Since its inception the dance music community has been defined by positivity, ingenuity, and unity. It is now time to channel our strength to help shape the future we want to live in. Join Rave The Vote as we push our collective message beyond the tenants of hedonism and create a world worth celebrating.

Rave The Vote is a collaborative project by INFAMOUS PR, 2+2 Management, and Soul Clap.

‘RSVP to Rave The Vote and Register’ on the Official Website: http://ravethevote.org