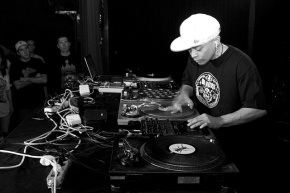 Speaking of Kickstarter, turntablism god Richard Quitevis, a.k.a DJ QBert, raised a total of $128,378.00 ($28,378 over its $100,000 goal) on the crowdfunding website to package his new album in an innovative new way: a sleeve that doubles as a DJ controller. The interactive packaging is the product of a collaboration between Algoriddim’s DJay app and Novalia‘s capacitive touch and PrintedMIDI technology. The investors who got in on the Kickstarter pre-sale will be able to manipulate and effect the album tracks or any MP3 via the DJay app on your mobile device or tablet.

The sleeve-controller seems to be able to fully control the app’s jog wheel, crossfader, and cue point functions. Check the video below to see it in action:

“EXTRATERRESTRIA is DJ QBert‘s much-anticipated follow up to his groundbreaking debut album and feature film, Wave Twisters. Several years in the making, Extraterrestria is a wide collection of various types of music from other planets and dimensions from around the galaxy …. Featuring DJ QBert’s signature skratching, the album is accompanied by several well-known musicians to boost the sonic soundscape; from world-acclaimed cellist and trombonist Dana Leong to super producer Chad Hugo of The Neptunes / N*E*R*D fame to the eclectic instrumental exotica sounds of Tipsy. Extraterrestria transcends what turntablism is and what skratch music sounds like in the future.”