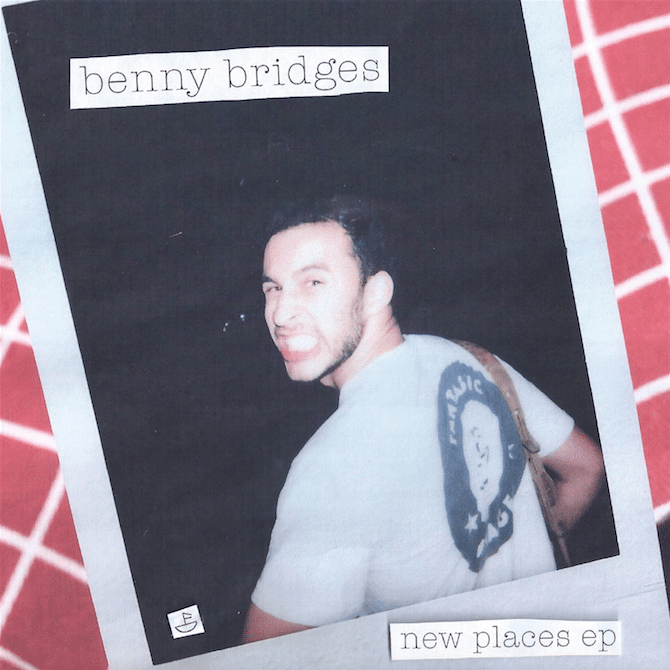 We have seen Benny Bridges‘ name before when he has been working alongside Dirtybird’s Justin Jay as his traveling guitarist, and their resume together is pretty stellar.

Now it’s the turn of Bridge’s first EP entitled New Places, from which we are premiering “Are You Ok”

“Benny Bridges is more than just a guitar player. On his first solo EP, Ben sets his unique voice as a singer/songwriter on top of raw, underproduced house beats. These songs work in the clubs despite their nontraditional forms and arrangements. Warning: you may strike an emotional chord with the audience by playing these songs <3” – Justin Jay

We also took the time to speak to Ben about the release and his solo project:

How does it feel to finally be putting out solo material as Benny Bridges?

It feels wonderful! I’ve been holding on to a lot of my own personal music for a while now and it’s very exciting to finally start releasing some of it. Before this EP, I had only released music with other people and I’m realizing that it’s a whole different ball game once you start putting out solo music. It’s a much more vulnerable experience but also that much more rewarding.

I know that you and the guys just wrapped up a pretty sizable US tour – has the time on the road with the guys opened your mind to new lanes of creativity?

1000%. Being around a bunch of musicians that you look up to and performing in front of people night after night creates a fast lane for inspiration and growth. You start to notice how different crowds react to the music which has influenced a lot of my newer productions. Every member of the crew is constantly working on new music, so when we are all together on the road there is always someone to show what you’re working on in the moment. Naturally, everyone’s opinions, techniques and tastes start to influence each other and the music we’ve been making.

Does producing feel like a different outlet of creativity to you as opposed to tracking guitar for Justin and others?

Collaborating with Justin and other artists is a very enjoyable process but with production, I’ve found that you have full control of your own creative expression. While it can be very fun to work with others, it has been nice to work on music that is simply an expression of myself.

Is this just a fun hobby for you or do you have long term goals with producing and writing?

For the majority of my life, I had always seen myself as a supportive artist rather than a solo artist. As I began working with Justin and the rest of the Fantastic Voyage crew, I started to gain an interest for production and would tinker around on the side. Through their guidance and support, I started to gain some of my own skills and write on the side as a different form of expression. I had created most of the ’New Places EP’ almost a year ago without any intention of releasing it. However, once we started touring, the guys gave me the confidence to start performing out my own music during opening sets. This process helped me gain confidence as my own artist as well as realize what was working and what needed to be tweaked so that I could go back into the studio to make the necessary changes to ultimately create a body of work that I was proud of. I have created a lot more music over the last couple of months that I look forward to releasing as well as building out my own live show with the guys.

What was the main inspiration behind this EP?

I wrote the majority of this EP in a relatively short time as I had finished up college and started to experience life in the “real world”. There was so much change happening at once that I needed to find a way to express everything that I was feeling. As we all do, I had been grappling with a lot identity issues since college and discovering who I was as an artist. This EP came together very naturally as a representation of that period in my life as well as an exploration of my artistic identity.

Where does the title New Places come from?

The title, New Places, comes from the first track of the EP which I wrote as I was dealing with the difficulty of juggling responsibilities while still holding the desire to explore, take risks and experience life. It’s very easy to get caught up in the routine of our day to day and sometimes you just want to drop everything and go try out a different adventure. I feel as though this concept sums up the entire EP as I embark on this new journey as a solo artist.

Is there a message behind “Are You Okay”?

During this time period, I was balancing three jobs as well as touring. I was working so much that it started to affect my relationships and well being but I wouldn’t admit it outwardly. It wasn’t until a good friend of my friend sat me down to discuss some of my own personal issues that I could find some understanding and answers to these questions that I had been asking myself. A simple conversation helped me figure out why I was feeling overwhelmed and ultimately helped me actively get off of the “hamster wheel” I was feeling. Everyone is going through their own personal battles no matter how big or small. This song is a reminder to not underestimate the power of conversation. Sometimes just talking things through can make all the difference.