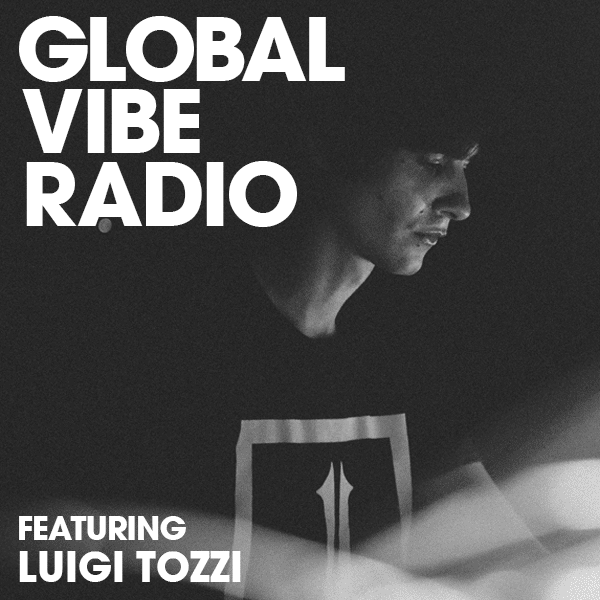 Get ready for a proper journey into the darkest, deepest corners of the technosphere as we welcome Italian producer/DJ Luigi Tozzi to the Global Vibe Radio family.

Over the last few years, Luigi Tozzi has been calmly making a name for himself as one of Europe’s go-to DJs for his distinct brand of techno that draws both from ambient music as well as from the club.
Raised in Rome, the DJ and Producer takes influence from the timeless Italian sound, which he’s further developed with an emotional, swirling, dubby atmosphere. There’s an unmistakable texture to his productions.

While prolific, Tozzi has kept his output within a close family of labels. Swedish label Hypnus are key here, having released a number of the producer’s EPs as well as his acclaimed debut album, Deep Blue: Volume 2, in 2016. Alongside Hypnus, Tozzi has worked closely with Mental Modern and Outis Music, releasing both solo as well as collaborative work with the label’s founder, Dino Sabatini.

Tozzi’s unswerving commitment to his sound, alongside his pensive and considered development as an artist has brought him to where he is today, with a touring schedule that’s taken him to some of the finest clubbing establishments around the world. Within this, he maintains a residency at Khidi, Tbilisi, which in recent years has emerged as one of the best clubbing destinations in Europe. It’s through this platform that he brings his unique hybrid sound as both a DJ and producer, and can evolve and experiment as an artist.

Hi Luigi, thank you so much for the mix. When and where did you put this together?

Hello! Thank you for the invitation.  The mix was recorded beginning march 2021 in my home studio in Rome.

Is this a dance-floor orientated mix?

No, I’d say that it’s meant to be listened at home even if it is mainly composed by music with beats.

What was your mood at the time and what do you hope it conveys to listeners?

I’ve been picking music that is very dreamy and subtle in order to create a smooth and peaceful experience for the listener.

Any standout tracks in it that we should keep our ears open for? Any of your tracks?

I wouldn’t really point out a single track because my purpose is to compile something that basically sounds like a one hour track all together.

While we are talking about tracks… what have been some of your favorite releases from the year that just ended?

I’ve mainly been working on my own music in the last months so I didn’t have many long listening sessions. But if I had to recommend something I’d tell you to check Feral’s newborn label Aube Rouge, Christopher Ledger’s label CL Series and I’ve also been impressed by Munch’s first release on End of Perception.

Thank you! Life for artists like yourself changed a lot in 2020, with a lots of ups and downs. How did you cope with the difficult months?

2020 was terrible for everyone, including myself as the performances side stopped from one day to another.  But on the other hand I had plenty of time to make music without the stress of traveling. I am really happy to be able to just make music 24/7 at the moment.

Was your productivity in the studio affected?

Of course not having to prepare for Live and Dj sets has given me a lot more time to compose.

What inspires you musically in the studio these days?

The most inspiring thing that happened to me lately was spending more than a month in a very small island in Sicily called Salina between September and October.  I went diving every day and of course made a lot of music that was very much influenced by my life on the island and the peaceful times I spent there.

Did you devote yourself to other activities in these lockdown months beside music?

Yes, I went back to teaching French to children (which I was doing already before music became my full time job) and I am also giving some one-to-one music related lessons.

I know you’re originally from the beautiful Eternal City of Rome. You said you still live there right?
What is your favorite restaurant in Rome? How about your favorite hidden gem spot that tourists don’t know about?

Yes of course I have always been living here in Rome besides a year in Paris (2019).  The restaurant question is actually impossible to answer, so many great places to eat in the city.

But what I’d recommend to someone visiting is to have very long walks in the center of the city rather than visiting specific museums.

Rome and Italy in general are hotbeds for quality deep, cerebral and hypnotic techno. Why do you think that is?

Yes, we have many artists working on the deeper side of electronic music and an established tradition from the times of Elettronica Romana.  Having the chance to meet and share my passion with artists like Dino Sabatini, Gianluca Meloni and Claudio PRC was a true blessing for me, especially in the early days of my career.

The first place I want to go to as soon as this pandemic is over is obviously a club: being on the dancefloor is something I deeply miss, even more than performing.