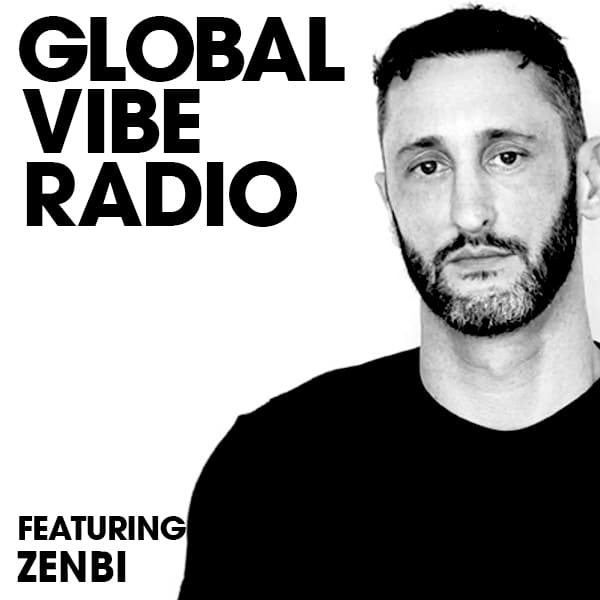 In this week’s episode of Global Vibe Radio we invite Washington D.C. based producer, DJ and label-head Zenbi with a one-hour guest mix featuring tracks by Rebūke, Dario D’Attis and Zenbi himself, amongst others.

Raised in Philadelphia and based in Washington D.C., Zenbi has found a second home in Brooklyn acting as a partner in Soup NYC. With newly-minted residencies at several of the hottest dance clubs in the world and a string of chart topping releases on some of dance music’s most prestigious labels including Suara, Great Stuff, Hotfingers, 303 Lovers, Pacha, Stereo, Skint, InStereo Recordings, and Twisted among others, Zenbi continues to work hard to refine and perfect his soulful, tribal-infused sound.

From the studio, Zenbi’s productions have been successfully featured on over 100 releases – receiving massive support from an ever-increasing list of talented producers. As a DJ, Zenbi tries to maintain a consistency to his sets that matches his production work, by combining a variety of influences and styles – deep, soulful, gritty, and a quality he describes unabashedly as ‘chuggy’

Enjoy our interview with Zenbi below and read-on for the GVR Track List!

Thank you for the mix! What can listeners expect from it?

Thank you! It’s an hour long snapshot of my current sets at SOUP. House, tech house, touches of techno and a couple of curveballs. A pretty good reflection of how I am in the studio too.

Any specific tracks we should keep an ear open for?

The mix opens with a track of mine on my new release on Natura Viva, ‘Patience’ out on July 30. Also look out for a new collaboration with Born I Music (Moon Harbour, Dirtybird, Defected) provisionally titled ‘Ill Bornhavior’ that’s been going down really well. My Lele ‘Breakfast’ acid rework – and the new Rebūke material on SOUP – including an amazing Harry Romero remix.

Love all the work you have been doing with SOUP NYC. Looking back at it, how do you feel you guys have done so far?

I think like all the best things we didn’t expect it to become what its already become, which is pretty much the biggest underground party in Brooklyn. The label dovetails perfectly with that and gives us a platform to showcase our music and the music of the artists we like to book, which in turn is helping reinforce the brand outside of NYC. It’s exciting times.

What’s been the most difficult thing you’ve had to deal with as one of the partners of the project and how did you overcome it?

I don’t think there’s been a particularly difficult moment outside of the usual learning curves and teething troubles around running an increasingly successful night and label. I have to say working with Chris and Andy is a pleasure, and the dynamic of the three of us works really well – we all have different strengths and we play to them and it works well.

You’ve been obviously working on that project while also working on your artist career, which takes a lot of work. How do you keep on top of it all?

Well the old cliché about being a labour of love is very true in this sense. I’ve been a promoter almost as long as I’ve been a DJ and a producer so they feel like different sides of the same coin to me.

You’ve been prolific in the studio throughout your career, your releases getting a lot of support from peers and fans alike. Is there one artist’s support you valued in particular due to the influence they have had on your sound?

That’s a really difficult question to answer, there are so many different people you could cherry pick for very good reasons. If I have to pick one I would choose Mark Farina tho – Mushroom Jazz sets back in the day, which included many of the hip hop jazz and R&B tracks I grew up with. That way of thinking about music and mixing things up is still a very strong thread in what I do today.

Who and what would you say keeps you motivated and inspired in the studio?

My dog Bronx. He always lets me know if I’m on the right track or not. And I have to walk him which helps clear my head if I’m getting a little too close to the coal face to make good decisions!

Soundtoys 5 suite at the moment. Particularly Decapitator and Radiator for adding presence and grit to sounds, particularly drums – and Crystalliser for endless texture on synths and samples.

Do you have any routines, rituals or process when working on tracks?

Not really because sometimes a tune can come from a vibe, or a specific set of chords, or a sample – the most important process I have is to try and translate that idea quickly and simply to a tune, as its easy to lose the essence of an idea. I like to try and get something even very rough, sketched out as quickly as possible and then it’s easy to add the details. In theory anyway! It doesn’t always work like that.

What are your top three pieces of advice on getting productions signed up to a label?

Personalise your communication. Take an active interest in the labels you want to target – this shouldn’t be hard as presumably you like that labels output. Don’t over face people, choose a maximum of three, but ideally only two tracks that you feel are most suitable for that labels output. If you have more material make mention of that in your letter but don’t send a playlist with 15 tracks on it – people don’t have the time to listen to that much material.

You were raised in Philly, live in D.C. but obviously work in NYC on the Soup project. Do you identify with all three cities or do you feel you belong to one in particular?

I live in the Philly area now which puts me in the middle of all three. And I do identify with all three yes. I’m born and raised in Philly so that’s my strongest affiliation. But yeah I also spend part of my time and work in Brooklyn so that feels very much like part of me too. DC is an area I know very well – I lived in the area for 10 years and threw a lot of parties there. So I’m extremely comfortable there. But Philly’s in my heart and Brooklyn’s in my soul.

#phillyasfuck yo. It’s got to be a cheese steak.

What’s your absolute favorite spot to visit/hang out at in each of these three cities?

Output, Panther Room and TBA Brooklyn are all favorites. The sound system in Flash DC is one of the finest on the east coast. Love playing there. But to tell you the truth my favorite spot right now is my crib in Philly. It has a full on music studio and DJ rig, not to mention poolside party hangout – I’d rather be home day or night than any other spot in Philly at the moment. My guest room also has a DJ rig for friends that come up with a Xone mixer, krk monitors, CDJss and a guest mac set up for Logic and Ableton. I’m a bit of a foodie too on the quiet – if you’re in DC check out Buredo, a sushi roll place run by a friend of mine. Brooklyn – Bunna Cafe: an amazing Bushwick Ethiopian vegan spot, but the flavors are to die for. As for Philly, you can’t go wrong with Zahav for amazing modern Israeli cuisine.

Do you ever see yourself moving to NYC?

Well I do keep a v small apartment in Greenpoint, Brooklyn which has also doubled up as a studio. This keeps me feeling very connected with what’s going on. But nowadays I’m back living in the Philly area and enjoying being a little outside the city for the first time in a while.

What’s your favorite thing to do when not working on music?

I like to fly planes (true story). And drive cars quickly.

What else do you have in store for the second half of 2018?

As myself I have various releases lined up with Atlantic Records, Glasgow Underground, Tronic, and various others. I’ll also be featuring on SOUP – obviously building the night and label will remain a priority for the rest of the year.