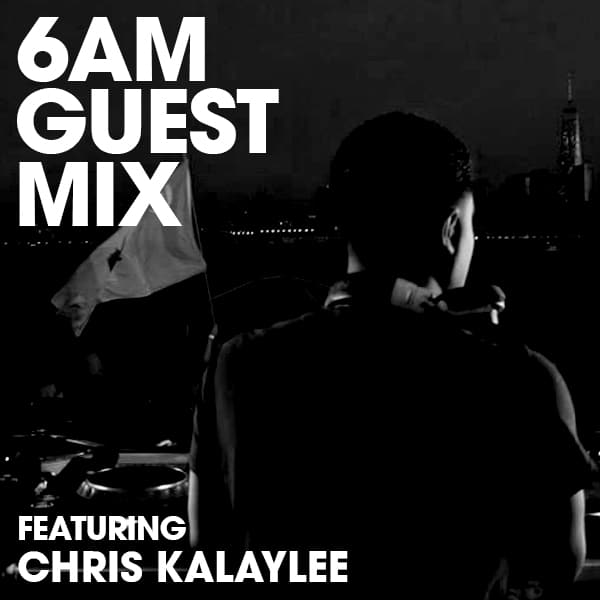 Chris Kalaylee is a hometown hero in New York City, and has been busy honing sound in the studio over the past few years. Having already shared the DJ booth with some of the greatest talent in electronic music we invited him to provide this week’s 6AM guest mix!

Chris is now ready to bring his own music to the masses. Released on leading US imprint Uprise Music, “Problem”  a powerful statement of intent, and a striking debut, now available on Beatport here.

Chugging along on a 4/4 beat, the sinister looped synths and chunky bass notes combine with a heavily pitched-down vocal to create a dark, brooding atmosphere, juxtaposed by an optimistic spoken word vocal before building to a break of truly epic proportions. One for the basements, ‘Problems’ is a cut above the usual house fare, and marks Kalaylee as one to watch for the future.

Enjoy his guest mix and our exclusive interview below:

Hi Chris, thank you for the mix mate! Can you tell us a little about it including where you put it together and what your mindset behind it is?

I started off more with some progressive tunes with some cool melodies and worked my way into more tech/future bass house towards the end gaining some energy along the way. (Peep my latest single I ended the mix with!)

Congrats on the new single, a debut for you right?

Yes! My first ever single published and released!

What made you decide that this was the right track to debut a release with?

This was my first track that felt right after I was done with it. I sometimes struggle on when a track is actually done and sometimes you can get stuck always fixing something that sometimes doesn’t need to be fixed. I was able to reach a point where I felt comfortable and proud of the track to release.

Where and when did you produce it?

I started working on this project around February 2017 in my recording studio in my basement.

Is this single an indication for what we can expect from you in future productions as far as soundscape and general direction go?

Yes at the moment this is the style of music that I’ve been feeling a lot. I do believe consistency for an artist is key. But I also believe an artist is at their best when you are not constrained or feel pressured to stick a certain style every time.

Do you have more releases planned for the rest of the year and 2019?

I’m actually planning to release another single before the end of the year! I would love to have a few more releases before the start of festival season of Spring 2019.

You’re New York City through and through. What does it mean to be a New Yorker for you?

I know nothing else than being a New Yorker. This place is very special with a lot of opportunities knocking right in your backyard. As much of a cliché it is, the saying “if you can make here you can make it anywhere” is very true.

My favorite if you’re including all 5 boroughs is Lee’s Pizza on Staten Island. If I’m in the city then my go to is Artichoke.

And how about bagel?

Best bagels hand down are at the deli on Clove Rd & Hylan Blvd, also on Staten Island. Not sure the name of it now but everyone calls it from the previous name M&M Bagels.

Where do you party in the city when you’re not playing?

I love to go out in Hoboken, NJ the bar scene is awesome there. I also love the vibe at Brooklyn Mirage in the industrial setting.

What’s the weirdest thing you’ve seen in the city?

I think I see something weirder and weirder every day.

I definitely believe New Yorkers have a tougher attitude to them, especially the New York accent. I think the stereotype that New Yorkers are mean is a little over exaggerated. Most people you’ll come to find out are nicer than you think.

Do you ever see yourself moving?

I’ve been thinking about heading to Miami within a year or two. New York will always be my home, but I am also not a fan of the NYC weather or traffic.