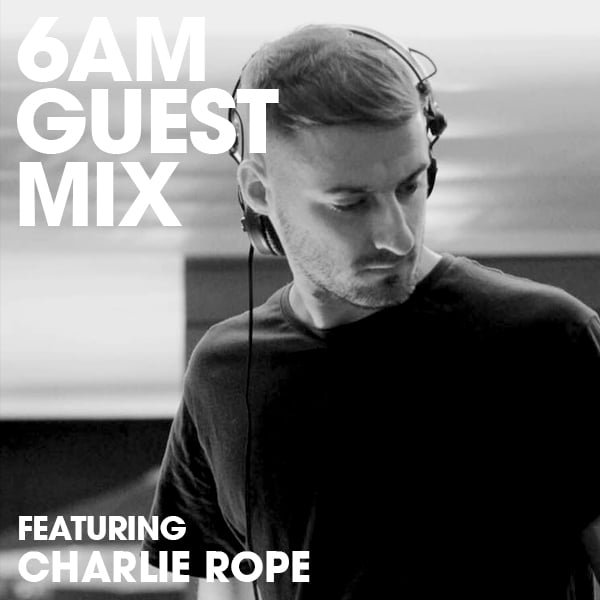 Heavily influenced by the likes of Larry Levan, Giorgio Moroder, Frankie Knuckles and Giles Peterson, Charlie Rope’s love of classic house music and disco is apparent in his productions, which are also driven by a desire to bring people together through music.

Growing up in Bedford listening to disco, funk and early house music, Charlie has started to find his feet as a producer, which only felt like a natural progression after DJing from a relatively young age. Both a regular on the dance floor and long-time listener of BBC’s Essential mix has help build the foundations to his love of club music, track selection and energetic DJ sets.

His very first release was on Reptile Dysfunction back in 2017, confidently setting out his musical stall with life-affirming disco loops and chunky house grooves. Charlie returned to Doorly’s label this fall with his second solo EP, Different Love: four propulsive house cuts with a healthy dollop of disco for good measure.

Gooday Charlie, thanks for the mix! Where did you put this together?

Hi! No problem, I recorded the mix in 2 parts, some of it at my friends house but the majority was put together at my place. It was good fun recording it, sometimes I can over think it when it comes to track selection but this time round it was pretty fluid.

You grew up listening to electronic music. Can you recall when you first discovered it?

I remembertwo2 records that were often played by my Dad that really resonated with me, one was Donna Summer’s “I Feel Love”, the other was “Tour De France” by Kraftwerk, it was weird but in a kinda cool and curious way, Looking back now it’s not a bad place to start! although it was mainly Funk & Soul music that was played around the house and it wasn’t till a little later that I started to discover more electronic stuff.

Who were the first artists you listened to?

I think Stevie Wonder and Whitney Houston where the main artists, and groups like The Gap Band, & Earth Wind & Fire, again it was mainly records that my parents played, so I didn’t really have much of a say but I just remember the tunes were good! I think the first album I properly listened to was “Rio” by Duran Duran, and its still so relevant today too!

Who or what was the main influencing factor that prompted you to make this a career?

Good question, I can’t really say there was a definitive moment or a stand out reason that sticks to be honest, it’s just I’ve always had a fixation to music of some sort, an obsession almost, After water and food, music is what we all can’t live without, ok maybe oxygen too but I don’t think I could make that. I love the idea of creating art that can change people’s mood & feelings, and hopefully have some sort of positive effect in time.

Besides, I’m pretty crap at everything else so let’s hope this pays off!

Chicago and old-school New York house/disco have both been an influencing sound in your life and your music. Have you gotten a chance to travel to these cities?

Guilty, not yet, having said that I am off to the U.S. next year, and they’re on the list!

Are you an artist that sticks to studio and being behind the decks, or can we find you on dance floors getting down also?

On the floor for sure! It’s so fun man, dancing the night away with your mates is the best.

What was the best party you attended this year?

Off the top of my head I was really impressed with Boomtown this year, the aesthetic and attention to detail on production is amazing, also Pikes in Ibiza takes some beating, I’ve had so many fun nights in there, DJ Harvey was on music duties what more could you ask for?

How about the best one you have played?

Hmm, tough one! There are a few to choose from but for different reasons, going to sit on the fence here for now.

Who are some of your current favourite artists?

I’m really enjoying SZA at the moment, she’s amazing, Anderson, Paak, and Tom Misch too he’s pretty dope! Also I love the new T.E.E.D. records which have been on rotation, extra shouts to Haai and Holly Lester as well, both really good DJs definitely go check them out if you already haven’t!

Your latest release for Doorly’s label received great praise, including a fantastic Mixmag review. Can you tell us a little about that EP and how the release came about?

Yes I really appreciate the Love, it was kind of a part two or follow up to the previous release. I made a bunch of songs to play out and music designed for the club, so basically it was just a case of putting them all together as an EP. I tried to keep it varied, pianos, Italo synths, disco strings etc., but all 4/4.

You’re playing fabric at the end of the month! Excited?

I think that’s the best word to describe it yes! I’ve been on the other side of the decks many times, so I can’t wait to be in that special booth this time around. I feel there are certain tracks that you can play in Fabric that you maybe wouldn’t necessarily play at other places, it’s something DJ’s look forward to in their schedule and they put aside particular records for it. there is certainly a little magic going on in that place, and a whole lot of history, I’m just glad to be a part of it.

Where do you think you will be spending NYE? Are you playing anywhere?

Up north I think, U have had a couple of things mentioned to me this week about playing, so I’m just working out the logistics… news soon!

I am sure you’ve already been working hard on things for 2019. Anything you can share with us?

I have a fair amount of music that is “ready to go” that I am happy with, so I’m just going with the flow. Naturally, when the time feels right, I’ll put something out. I’ve also been writing a few songs recently and I am looking forward to collaborating with some other artists, so yeah hopefully 2019 will be sick!