Tomorrow night Underrated Presents’ Clinic Wednesdays party series celebrates three years of operation, a great achievement for any brand and more so for one with operations mid-week on Wednesday nights.

To ring in their third year of activity, Clinic Wednesdays have invited none other than Keinemusik head-honcho Adam Port as the special guest for the night, with support from Human Resources and Dahlia. You can purchase tickets here.

6AM caught up with Adam as he landed in Los Angeles for the gig:

Hi Adam, it’s great to have you in LA! You just came from Playa del Carmen where the unfortunate incident took place on Sunday night during BPM Festival. As an artist that played the fest just last week what was your reaction to the news?

I got the news a little bit later because of the different time zone here in LA. I woke up and had my cellphone full of short messages from friends, then I realized what happened. I was shocked.

BPM was originally created as a getaway for bartenders, promoters and musicians to reset the clock after a long year of work and ahead of the new one. What has your experience been as both an attendee and artist there?

I’m a fan of The BPM Festival. From the artist point of view but also as a guest at other parties. I’m always staying there for a couple of days with my crew to escape the winter in Europe and to enjoy some tacos and day parties.

Are there any other similar or comparable events around the world for artists in the yearly calendar?

Off Sonar in Barcelona is also always a little bit like this, staying with fiends on the beach and enjoying life. The only thing I don’t like about Off Sonar at the moment is that it became to big. Too many parties, too many DJs, venues got too big.

Your recent Free WiFi Remix of Nick Monaco’s “Half Naked” is beautiful! Do you have any more music coming out soon?

Thanks. Yes, I have another EP coming out at end of this month. Adam Port & Stereo MC’s Changes EP is coming out on Freerange with a Jimpster remix. But also on Keinemusik we have an EP of Rampa coming out in January also.

What are some of your favorite upcoming Keinemusik shows we can be on the look out for?

I’m still on US Tour with &ME and we;ve got some nice shows coming in the next days in Detroit, Boston and Montreal. But we are already planing our Keinemuisk Events during Off Sonar in Barcelona, ADE in Amsterdam and our summer Open Air in Berlin.

What was your favorite release of 2016?

Felix Da Housecat, Vince Lawrence & Jamie Principle – “Touch Your Body” was on one of my favors tunes this year. It was released on Crosstown and sadly nobody took notice of this fantastic EP.

The American “underground dance music” scene is experiencing some form of a resurgence right now. How is it being viewed by European artists like yourself?

It’s great. A whole new marked opened for us. The USA has so many cites and it’s possible to play more from year to year. Also the audience is much more aware of the sound than 5 years ago. It’s a lot of fun touring in the United States, the only difficult thing is the size of the county, flights are taking really long sometimes.

You’re back in LA for Clinic Wednesdays’ 3 Year Anniversary! What’s your relationship like with the city of LA?

Totally looking forward to this one. Paying for the Clinic crew was great already the last time and it will be even better for the 3 Year Anniversary. I like to come to LA to spend my time between the other shows on a US Tour. The vibe here is so chill.

Any favorite spots you like to hit up when you’re in town?

I mostly stay in Venice Beach. I like to take some walks on the beach in the morning before the tourists are flooding the streets.

Looking forward to Wednesday night, see ya on the dance floor!

Same here, it will be a good one! 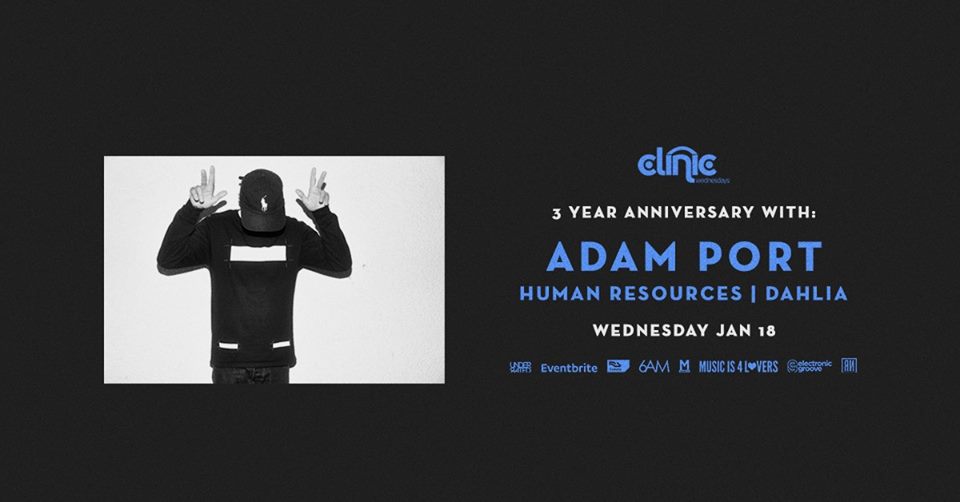 Tickets for Clinic Wednesdays 3 Year Anniversary with Adam Port are available on Eventbrite.