Zepherin Saint launched Tribe Records in 2008 with the motto of “One Sound, One People”, they since have breathed new life into dance music with their unique worldly approach to their sound.

The forthcoming Hurry EP is a melting of minds between two musical souls, as producer Zepherin Saint joins forces with the exquisite R&B vocal star Sara Devine, who together have created a heavenly slice of dance floor Soul. Sara is one of Zepherin’s favourite House vocalists and he has been a fan of hers ever since hearing ‘Take Me Home’, produced by Masters At Work. Having performed together in the UK some years ago, they kept in contact and were waiting to find the right time to record together. This soulfully intoxicating outing comes ripe with sun drenched afrocentric rhythms, where classy brass arrangements and warm key melodies laid over a sublime urban bass groove provide the perfect soundtrack for Sara’s delicious vocals to seamlessly glide

With the imminent release of Zepherin Saint’s new collaboration with the delicious Sara Devine, 6AM checked in for a chat.

Music was a major feature in my family home growing up. My elder brothers had a funk and soul sound system that played around the UK, so it was a natural progression for me to follow in their footsteps and went on to form new a sound system called Shock with my brother and a group of friends who some went on to carve out their own path in in the industry. Ashley beadle (Xpress 2) Stan Zeff, (Tambor) and Ricardo da force RIP (KLF).

Production came to me from being enthusiastic about learning different instruments which eventually developed into production by the time I was in my late teens. I got a lucky break when Marshall Jefferson remixed my first single in 1988 and invited me to the studio session to watch him work on it with Ten city. That was when I got my first taste of what a professional producer does and from then knew that was my calling.

What turned you on to producing House Music, in particular Soulful? Have you experimented much with other genres?

House music was the first production style I really took seriously and released. London was going through a house revolution in the mid eighties and the energy that the music created on the dance floor inspired my creativity. As cliché as it sounds there was a sense of freedom that came along with this socially and musically that triggered something in me to want to produce this sound and be a part of its evolution. So I worked in record stores, played warehouse parties and got in the studio whenever I could afford to submerge myself in the scene.

The era I came from was not about whether your producing a vocal track, acid house or Techno, we just made all of it. Soulful house known as garage at the time connected with my earlier roots in soul, disco and boogie. The delivery, the lyrics, the song and its arrangement were always important to me and uplifted me as a listener and I guess this carry’s till today in my productions.

I view all my productions as soul no matter what the genre, for me this is where it comes from in me. In the past I have produced various styles from Hip Hop to Arabic pop bands. I always keep working in other genres as it keeps me challenged and able to learn more about my craft by taking techniques and sounds from one genre to the next. When you stop learning, your creativity dies. At present for example I have three different genres bubbling in the studio lab ranging from a Techno inspired project called IFA IYAY to a Neo soul live band I am producing.

You’ve travelled extensively, which places have had the greatest impact on you musically?

Working with musicians and vocalists in the Middle East and Africa brought a whole new world to me of time signatures and obscure sounds. I have recorded so much from this part of the world over the years that these sounds are rooted in all of my productions.

You’re just about to release your new single ‘Hurry’ with Sara Devine, tell us a little about the song and what to expect?

I wrote the music with my writing partner Damian Smith and I produced it in the hope of making something timeless that incorporated a lot of live instrumentation. When I am creating soulful house the song and delivery are paramount and everything else is about giving these elements the best bed for it to rest in with comfort. That’s what you will get with this release a great song and amazing delivery from Sara.

Known largely for her classic, ‘Special’ with Louie Vega, it’s been a while since we’ve heard Sara on a record, how did you coax her into the studio?

It took 6 years! I first met Sarah when she came over to perform at my Raw parties in London and we kept in contact but Sarah is a very busy and in demand vocalist who is constantly touring, so I had to be patient but I knew it would be worth the wait. When Sarah had finally found time I sent her two demo backing tracks and what is now Hurry is the one she chose. Look out for our next collaboration coming soon. 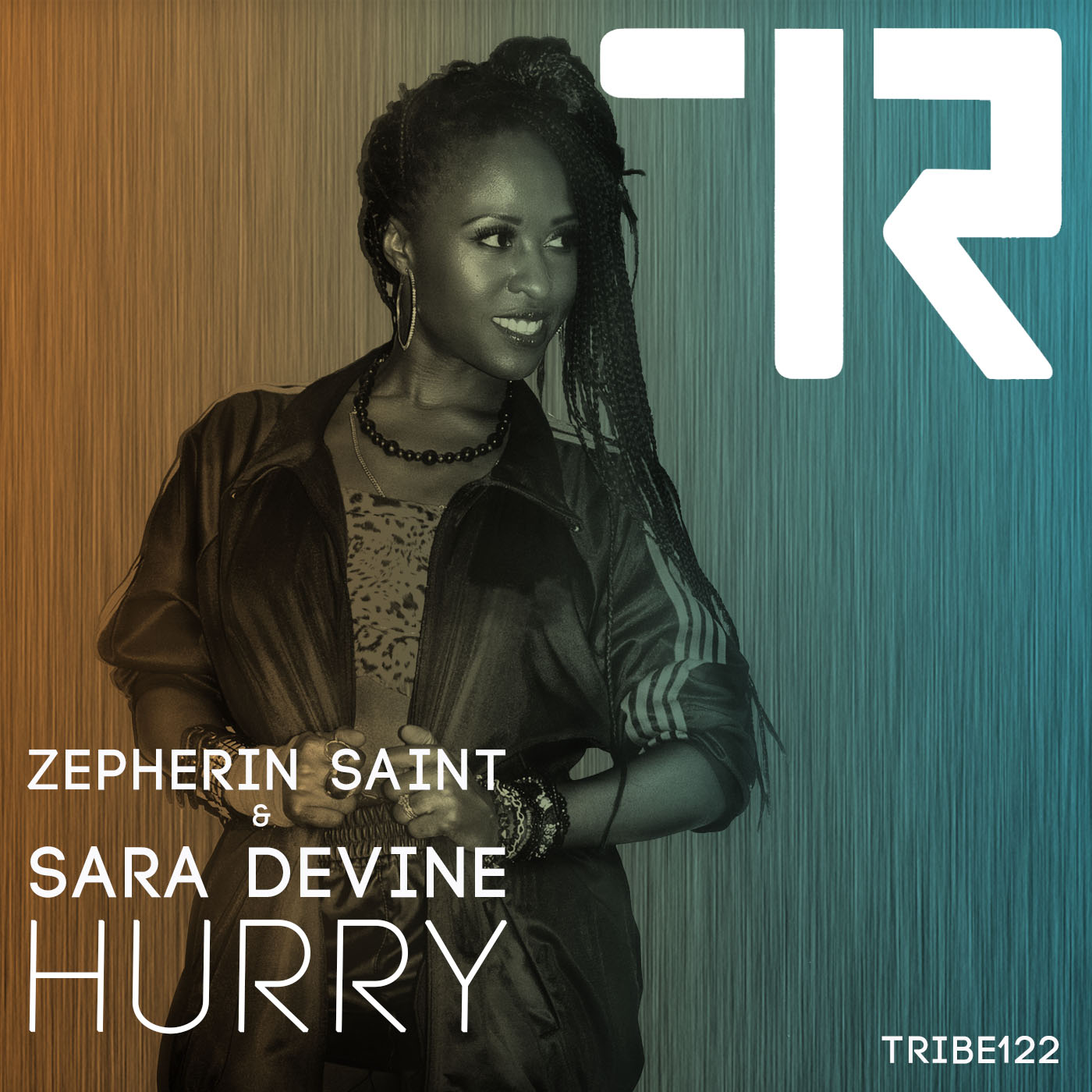 Sara is one of my favorite vocalists in house music so for me it was a dream come true to finally get to record with her. There are times when you need to go back in the studio a few times to get it right with a song or vocalist but with Sara the vocals arrived and I did not have to change anything. The delivery was effortless and the lyrics had a subtle sexiness about them.

Tribe Records has been running since 2008, tell us a little bit about the artists featured on the label and your biggest releases to date?

Early on the label was heavily driven by soulful music from the likes of Nathan Adams, Peven Everett and Timmy Regisford who all produced amazing hits for the label that helped put us on the map and capture the attention of house music fans. With my love for all types of music came releases by Black Motion, Djeff Afrozilla, Jose Marquez and Manoo very early in the evolution of Afro house. Today the label still joins the dots between Soulful and Afro dance music scoring hits with Souldynamic, Afro Warriors, David Montoya and Mike City to name a few more recently.

What do you prefer the most about your job: making productions, DJing to the crowd or running the Tribe label and events, and why?

They all need the same amount of love, passion and attention. There are personal rewards and achievements you gain in each of these areas as you work.
In an ideal world I would be doing a lot less and focused on being in the studio as this is my first love. But todays industry as an independent company does not cater to this. Producing in the studio is where I feel most comfortable as its where I express myself fully without interruption. The process of taking a beat, chord or vocal and watching it unfold, develop into a finished production is the part of the music process I enjoy the most. There is an excitement that you feel of anticipation and contentment as you create and listen back to your completed works.

What are the biggest challenges you’ve come up against so far?

Adapting to the change of the industry. A magic was lost in the business but I am not one to hark on about how it use to be but as a result it means you have to keep yourself motivated constantly to stay on the top of your game. This over the years has been my biggest challenge to always feed yourself the belief you need to succeed.

Do you ever find time to relax?

Nowadays I always make time to relax as its as important as the work. Relaxing to me nowadays is reading a good book, dinner with great company and Tai chi. It allows me the space to let new ideas flow through. Before I would work all hours and end up with a burn out and give birth to the dreaded creative block which is just a signal saying. STOP and take some time out.

Oh wow, that’s taking me back. Believe it or not my first paid gig I put on myself at aged 14. Hired the local hall by pretending to be 18 and got my sister to make posters which I got mates to paste in their schools. Hired a bouncer and my brothers sound system and walked home with my first paid gig of 400 quid in 1984. Not bad. Other than that it was a blur as I went on to play so much back then so not sure.

As I got the choice I would choose a 3 way and make it DJ Harvey and Rich Medina. Both these guys have a great eclectic ear and it would be fun to play with them in this format at an after hours somewhere.

Earth Wind and Fire for the great songs and amazing arrangements. Larry Heard for the experimentation and his open mind to music. For me he is my greatest influence in electronic music.Could not put it into just 3 but more recently I have been inspired by Led Zeppelin, Cream, War and the whole rock, funk, blues transition that took place in the late ’60s to early ’70s

“Someday” CeCe Rogers… Loved it the first day I heard it in the store and still love it till today.

What else have you got coming up production wise and release wise for the label?

‘One Sound’ – a Zepherin Saint release for April, ‘Skyy’ – Zepherin Saint, a cover of the classic from Raphael Saadiq and collaborations with Sara Devine and Miranda Nicole.