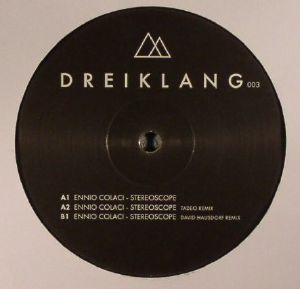 “Stereoscope” is Ennio Colaci’s debut on Berlin’s Dreiklang, following the label’s characteristic triangular composition with Tadeo and David Hausdorf remixes completing the EP package. Having had their first release in 2015, Dreiklang marks their third record after releases from Edit Select and Och. It comes from Italian producer Ennio Colaci who produces alongside the owner of Bosconi Records, Fabio Della Torre, under the alias Minimono.

Ennio’s Stereoscope steers away from Minimono’s disco flavored house orientated sounds, bringing a warm palette of textures in the form of soft noise, percs, dubby delayed chords and a sub kick and bass relationship reminiscent of early dub techno records. Alongside the title track there are two remixes from David Hausdorf and Tadeo. Tadeo roughens Stereoscope up and introduces a more techy sound, while David Hausdorf dries up the original, moving the focus to the dub chord.

Stereoscope on Dreiklang is a 180g, vinyl only release surfacing in handcrafted record sleeves by Berlin based artist Nils Altland on the 14th of March 2017. 6AM had a chat with Ennio in honor of the release and premiere of the title track, which you can listen to below.

Ciao Ennio, congrats on the new EP! Did you record that back in Italy?

Thanks, yes, I live in Florence and there I produce my stuff.

You usually release as Minimono, your joint project with Fabio Della Torre. What prompted this solo outing?

It’s true, the majority of my productions have been released together with Fabio as Minimono. Playing music is a daily activity to me, most of the stuff that I produce is not meant to become a record, but could be played during my live set or as a soundtrack for exhibitions or simply for my personal need to create music. Those tracks sometimes stay stored on my archives for years until someone listen to them by chance and perhaps they then are released.

Sound-wise, what’s the difference between what you produce solo and as Minimono?

Minimono is basically a house music project which faced different phases in the past years. My productions as solo may vary with different kind of sounds but most of my released track are more close to techno sounds.

What software and/or hardware did you use to produce the title track?

Honestly, I’m not sure what software was used to produce this track also because it was made a few years ago. Furthermore, I am not that much interested in the technology side of the production, and I am more focused on the final outcome.

What are some of the creative processes you adopt in the studio to get your creative juices flowing?

Basically, I just sit down in front of my monitors and I try to create something with a soul, this is my aim while producing music. Most of the time I am not very satisfied with my work, but the music makes me feel, and I hope this could happen also to my listeners.

Any particular inspiration for this track?

It made me feel some stuff from Basic Channel or Chain Reaction but perhaps more oriented to the dance floor. I used to like that sound and probably is one of my favorites from Germany. I feel like it sounds like electronic music from ’90s or early 2000s such as Alva Noto, Mouse on Mars, To Rococo Rot, Matmos and many others.

Tell us a little about the remixes, what kind of spin do they give the track?

Oh, the remixes are really effective, deep and straight. The Tadeo remix is good for the DJs, dubby and more melodic. The David Hausdorf remix is also great to hear, so I hope we can reach some more people.

Why Dreiklang and not, for example, your own label Bosconi Records?

Bosconi is actually not my own label, is Fabio della Torre who is the owner. I released many records on Bosconi, but it is not mine. The EP is out on Dreiklang because they gave me the opportunity to do that, with a very special vinyl: the project runs vinyl-only on 180gr high-quality wax with beautifully hand-drawn designs of Berlin artist Nils Altland gracing each sleeve, transforming the covers into individual works of arts). I thank them very much for this.

You can purchase the Stereoscope EP by Ennio Colaci, out on Dreiklang, via Decks or Juno.