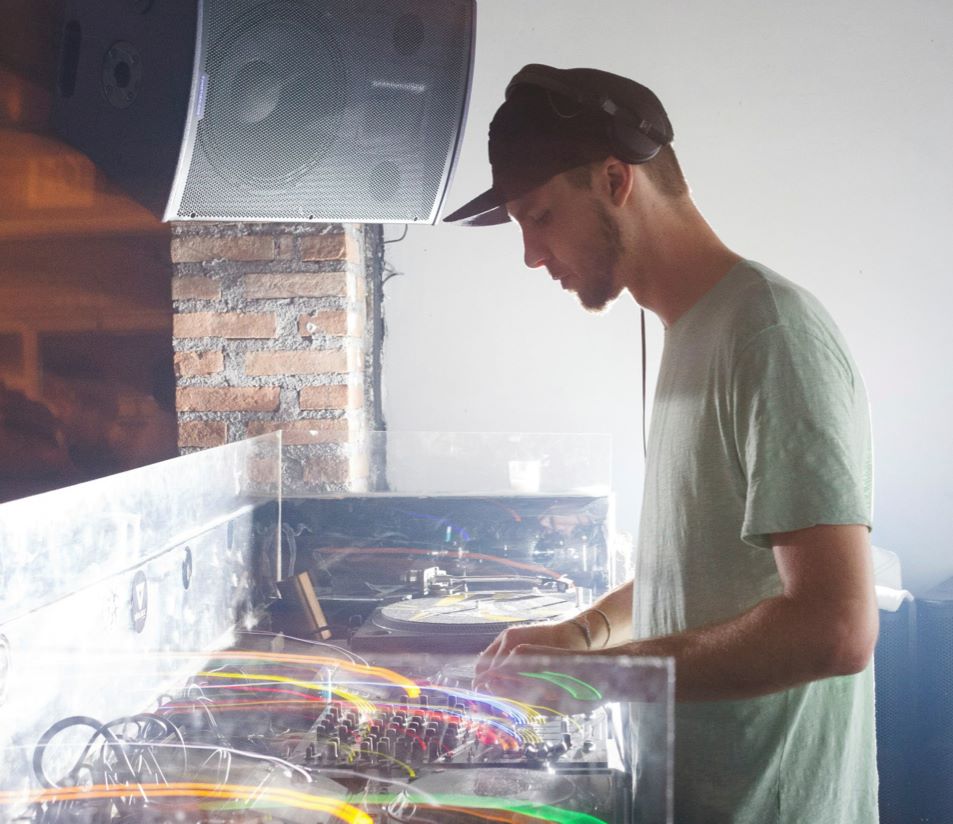 The third release from Chicago’s Pool House Black, a sub-label of Chicago’s Pool House that focuses on the more minimal and deep sounds of techno to come out of the imprint, comes as a four-tracker courtesy of Texas-born and Chicago-based producer Christian Thomas. Run Of The Mill is composed of four original tracks, all available for pre-order via Beatport.

We are premiering the entire EP exclusively on our SoundCloud, and took the time to chat with Christian to learn more about him and the EP ahead of the forthcoming release.

Hi Christian, congrats on the EP coming out on Pool House Black! How did you first get in touch with Ricky and the other guys at the label?

Thank you! This will actually be my second time releasing with Pool House Black. The first was a remix for Kike Mayor for their debut release for the new sub label. I met Ricky and Jimmy in Chicago at EvilOlive. I got really good vibes from them from the beginning and I thought it would be a good idea to work with them.

Let’s backtrack a bit. Where are you from? Were you raised in Chicago?

I was born in San Francisco, California and raised in Texas. I moved from Austin to Chicago last year in April.

Do you remember your first interaction with electronic music?

It was around 2003 when I discovered Sasha and Digweed, Nick Warren, Hernan Cattaneo. I was moved by the fusion of synthesized and natural elements they incorporated into their music to produce futuristic sounds. I searched for the Global Underground, Balance and Fabric mixes and all the various mix cds I could get my hands on. From there slowly moving my interest to minimal and techno house. I appreciate all styles of music as I am mainly influenced by “non-electronic” music such as jazz, R&B, blues, and hip hop.

How were you influenced to begin producing music?

The south Texas underground electronic scene is very small and close nit, especially 10 years ago. At that time it wasn’t easy to get gigs or play out with your peers as this type of music wasn’t as popular in the states as it is now. However there are great club owners, promoters, djs and artists in Texas doing some amazing things and I’m glad to call these people my good friends. It wasn’t until around 2010 when I got my official start with Enrique Cortazar, label owner of Unscene Records in San Antonio, Texas where he provided the platform for me to play proper underground shows and release music I was producing at the time. From there it opened opportunities for me to travel to gigs around Texas and in Mexico, and release music through various labels.

Tell us a little about how it is to live in Chicago right now for a house and techno listener. Where do you go to catch acts?

Chicago is a great city if you are into house and techno. Whatever music style you’re into there is a venue or place for it, there is definitely a strong and healthy scene here and for good reason, there is so much history in this city. There are different venues for different occasions. Smartbar is probably my favorite spot, located a block away from Wrigley Field and down the street from Gramaphone Records, they have a finely tuned Funktion One system and I have had some wonderful experiences there. Spybar is another cool spot if you want the downtown night out and catch some top artists. Estate has a nice rooftop with great views of the city. Arbella is a nice low key cocktail bar for more intimate nights. Also, the loft and warehouse spaces around town make for great “off the grid” experiences. I have yet to check out The Mid and Primary, but I hear great things about both.

Any local favorites we should know about?

There are so many talented local artists in Chicago and I have had the opportunity to meet a lot of them and hear them play. Some favorites are Dani Marcu, Josy, Bisharat, Mantas Steles, Max Jacobson, Jordan Bernardo, Jimmy Luna, Ari Frank, Mia Wallace, Mike Brankis, Jason Patrick, Phillip Stone and Housework to name a few and I am discovering more all the time.

Do you yourself DJ out?

I have had a couple of gigs in town so far at EvilOlive, Arbella and at an art gallery during the Do Division Art Exhibition.

What are some of your favorite things to do in the city that aren’t music related?

I like to go for bike rides along Lake Shore Drive and try new restaurants around town. I enjoy camping and exploring the breweries and wineries in Wisconsin and Michigan.

Ok back to the release… it’s four original tracks from yours truly. Where did you produce these?

All four tracks were recorded here in Chicago in my home.

What software and hardware gear can we find in your studio?

I use a cross between hardware and digital instruments. I use Ableton Live as my main DAW, Motu interface and Adam studio monitors. Some main pieces are the Nord Lead 2x, Moog Mother 32 and the Elektron Analog Rytm. I have a turntable running through my Xone mixer in the studio which I use to sample records and find different sounds from. I use a Maschine MK2 for quickly manipulating recorded samples. I also use the Arturia V Collection and D16 stuff from time to time.

Tell us a little about these tracks. Anything in particular inspire the EP as a whole?

They all came from different influences. You will hear abstract noises and voices in “Express” which I recorded from my iPhone on CTA trains around town. The title track “Run Of The Mill” is a spaced out dubby cut, something more for the club. The track “Shoshoni” was sampled from sounds and voices I recorded while camping at Yellowstone Park in Wyoming several years ago, but never used them until i made this track. Shoshoni comes from the Northern American tribe of Indians called Shoshone, so I thought it was fitting for the track title. All & Nothing is more deep tech with vocals I took from a Lou Reed interview talking about the state of music counterculture in 1969, I think the message is still relevant today.

Mainly focusing on producing in the studio. I have some more EPs and remixes in the pipeline. Stay tuned!

Pre-order Run Of The Mill by Christian Thomas on Beatport