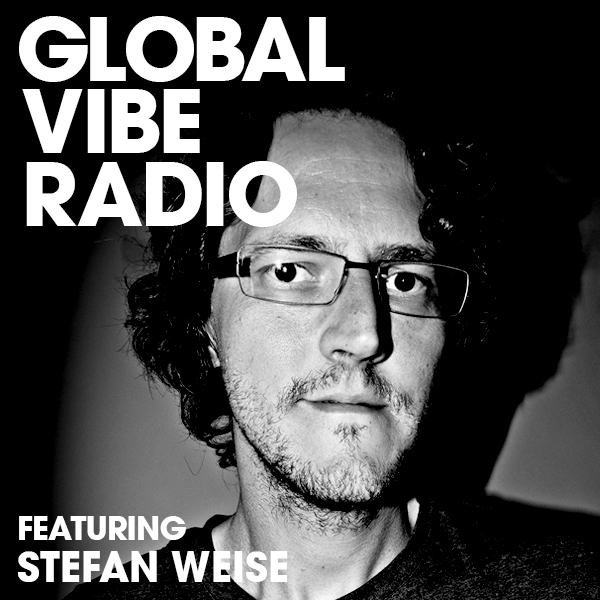 Welcome back to Global Vibe Radio!

For this 49th episode we have enlisted the musical prowess of producer and DJ Stefan Weise. Now residing in the United States, Stefan is originally from Italy and Germany, and has been involved with electronic music production and DJing for over two decades. He discovered his passion thanks to his father, who was a DJ in Italy, and an upbringing that included a lot of early introduction to underground electronic music, as well as funk, soul, Motown, disco and acid house.

Heavily influenced by Detroit and Amsterdam techno, sci-fi concepts and science, Stefan has been the host of the monthly “Blue Industries” radio show on Proton Radio for over a decade, and has released on labels such as Wolf Trap, Lucidflow, Audiophile Deep, Frequenza, Moveubabe Records, PUNCHIS Black, Eintakt and Evoked Recordings. Stefan just released his Paradrum EP on 3KM Records, containing an original, a personal take on the title-track and a remix by Nadja Lind. The EP, which has received early support from the likes of Danny Tenaglia, Ian Pooley, Fred P, Fabrice Lig and Ben Sims, is available for purchase via Beatport.

Enjoy the mix below and read on for our interview with him in honor of the occasion.

Ciao Stefan! Thank you for taking the time to talk to us and for the mix. You’re based in the States now with roots in Italy and Germany. Can you tell us a little about where you were born and your history with both those countries?

I was born and raised in Bolzano, Italy to German parents. We later moved to Germany for a few years and then eventually to the U.S. after discovering we had family there. At heart I’ll always see Bolzano as my home.

Your father was a DJ right? What kind of music did he play?

He worked as a DJ in the ’70s at a local Discoteque near Bolzano playing mostly what was hot then including a lot of Motown, Soul and Italo Disco. He brought home quite a few of these records as well, so that was part of the music I grew up listening to.

Did you learn how to spin from him? Was he an influence on your sound in any way?

Both of my parents are influential when it comes to music for me since they were both very open-minded listeners. My mom listened to a lot of the early electronic stuff and of course in Europe that kind of music was more likely to be heard on the radio already. I actually taught myself to DJ when I was 16-17. A high-school friend and I got together after school every day and practiced DJing on a crappy pair of belt drive turntables.

You’ve been involved with electronic music for decades now, with your “Blue Industries” show on Proton radio now over 10 years old. What’s been the successful formula for staying at the top of the radio show game for this long?

It sort of just happened. I love working on my radio show each month and have just been doing that for so long that at one point I almost lost track of how many years I’d been at it. The wonderful staff at Proton have been very kind in continuing to support my show, while Proton itself has grown into something much larger. I’ll keep doing the show for as long as it’s possible and we’ll see how far that will go!

You’ve been producing for over 20 years. How would you say your sound has evolved over this time?

A lot and it continues to evolve. I never stop learning and that’s what makes producing music so fulfilling for me. Sometimes I’ll listen to something I’ve done years back and will suddenly have a more objective ear. It gives me a lot of insight on what I can still learn and have learnt.

Regardless, your productions have always been somewhat inspired by Detroit techno. Who are some of your favorite Detroit techno producers?

Juan Atkins and Kenny Larkin for sure, but also Plastikman and especially Steve Rachmad’s work under his Norma G and Parallel 9 monikers.

Your Paradrum EP is dropping at the end of the month. Talk to us about the original track, what’s the story behind that one?

Everything I do musically is rooted in experimenting with sound and new ways to interpret an idea. I used to do a lot of sound design work in the early 2000’s, which usually involved very complex textures and tonalities, so distilling that kind of stuff down to something more dance floor accessible is a fun challenge. I do a lot of sketching, where I end up with tons of little draft tracks and eventually something just pops out at me and I get into it. Paradrum is one of those sketches where things just sort of took on a life of their own.

The EP packages comes with two remixes also! How are they different from the original?

Nadja’s remix is for me really amazing. What she does to interpret a track using her own vision is really unique. She kept the feel of the original alive, but deepened it even more. The “Branch” remix is again me experimenting and seeing what I could do with the remix parts and trying to think objectively about the track. It’s not easy to be objective when you’re dealing with your own music, so it’s a good creative and mental exercise for me. In this case the result felt really good and I kept going with it to create the remix.

Again thanks for the mix you did for us. Can you tell us a little about the environment where you recorded it and what your thinking was throughout it?

You’re welcome! I have a little space in my studio set up for DJing. It’s nothing fancy, just an older Pioneer controller and my laptop — sync button is permanently off by the way!. I live out in the country, so the city noise is not a problem here, but for me DJing at home has always been somewhat therapeutic. It’s a nice way to just disappear from the world for an hour or two. I feel very comfortable in my studio, so recording a mix there is really nice.

Are you currently just focusing on productions and the radio show or are you also doing live DJing?

Most of my time is spent in the studio working on new material and finishing projects. Sometimes I get lazy and just hang out on the couch with my kid and then usually end up writing music on my laptop with headphones on.

At this time, I’m not getting as many DJ gigs as I’d like, but it’s also been a good opportunity to build up a good quality catalogue of my own tracks to showcase when I do play out.