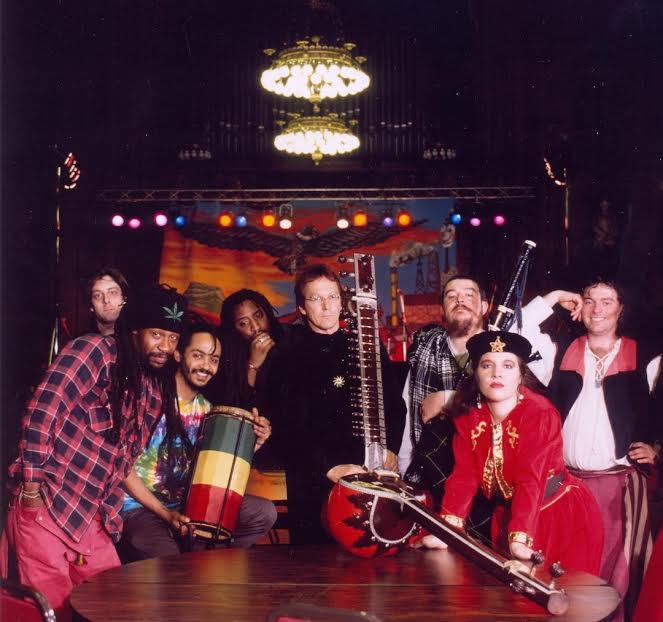 Heart of the Suns 1979-2019 celebrates 40 years of Suns of Arqa recordings. This album puts front and centre the sublime synthesis of dub and Indian Classical music that Suns of Arqa is renowned for.

The selection on Heart of the Suns 1979-2019 is deeper and less obvious than a Best Of album would be, though for us these are the brightest gems in the catalogue. As well as the predominant Indian classical motifs, there are also chants from an Amazonian tribe and low-tone throat singing from a Tibetan Lama, laid over solid dub bed tracks. Founder Michael Wadada has said “The link between the Indian raga system and the original beginnings of reggae is that they are both spiritual ceremonial music”. Other typically daring fusion flavours in the album include gamelan and, if you listen closely, a highland reel.

Suns of Arqa have always pushed their sound further; resisting the ordinary and embracing the extraordinary.

The list of Wadada’s collaborators is extensive and impressive. Suns of Arqa have worked with more than 200 artists over four decades. There are some veritable luminaries included in this album including Bryn Jones, Youth, Greg Hunter, László Hortobágyi, Raghunath Seth, Kadir Durvesh, Shahbaz Hussain and John Leckie.

Mastering was done by Gregg Janman for Hermetech Mastering. Tracks for the album were sourced from different releases and recorded in different studios; it was important to reach a consistent, warm and welcoming sound. Track flow was programmed by Interchill Records head Andrew Ross Collins with a listening experience in mind. A fully mixed version with no gaps will be available on Interchill’s Bandcamp page as a bonus track.

Here at the label we were fans of the band in the early 90’s and some of these tracks are like old friends. Now in 2019 we are most honored to compose this retrospective. We salute the contribution and achievement made by the legendary Suns of Arqa.