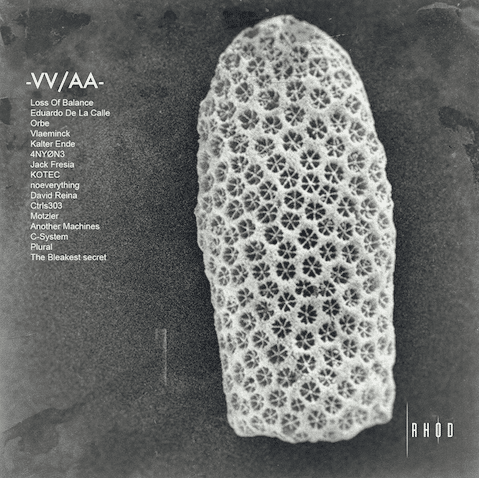 Rhod Records puts the finishing touch to this great first stage self-evaluating themselves with a compilation of fresh material supplied in part by artists close to the project and also integrated producers already in a catalogue that exhibits above all a firm commitment to sound experimentation and state of the art records that fluctuate between techno and electronics.

The extensive album is not only nourished by authors with a past related to the record company, but new and interesting faces join the label to supply the reference with 16 unpublished works with quite different registers, thus preserving the philosophy that stands the platform committed above all to the diversity and the quality of the product.

Loss Of Balance opens the album with “First Contact”, a cut of intangible techno loaded with subtleties, redundant dictions and penetrating atmospheres with which it manages to create an environment of warmth and well-being. In the consecutive Rhod Record track Eduardo De La Calle’s mood appears again, “CPD” is a cluster of cosmic details, an amalgam of infinite resources that attend both the rhythmic part and the harmonic context. With the third track the launching takes on a more mental temperament. ORBE proposes with “End Of Rise” to crack the possibilities offered by the pair of two arguments gestated with two parallel synth lines to the higest. Vlaeminck is more direct with “Crankarm” using a sharp cadence disturbed only by a sharp flared arpeggio.

Kalter Ende creates with “Alonso” a solid piece, direct techno with several ingredients operating in a loop and a buffer that varies gradually in intensity. 4NYØ3 repeats also experience with the record company and gives its subject a constant trot unfolding the drum with a successful delay, but “Comfortable Lone” is much more than a single percussive element, melodic motives continuously tear their tone apart and adopt a more ethereal character. With the “B Side” of Jack Fresia the vitality is increased in part due to its agility, but with “Phase 635” that freshness dissipates, although KOTEC maintains a metric similar to B Side deliberately loses the brightness of all its textures.

Anxiety and nervousness are two states perfectly embodied “Gafa”, Noeverything emulates different instinctual joints to be able to recreate this type of involuntary response. David Reina follows a more linear and deep pattern with “Eternal Life”, the essence lies in an invariable sequence of 4×4 associated with a sharp figure in the form of a triplet that loses a beat per meter. Ctrls303 projects a dynamic low frequency techno with “November”, and Motzler executes a continuously deployed chord in “Hypnoze” giving the most suitable description to its own title.

“Range” is the track of Another Machines, another author who reiterate their passage through the label with dynamism, with a panoramic rebound cut that has nothing to do with the forceful interpretation of C-System in “Late Bab And Never”, and the progressive adaptation of techno to a celestial atmosphere more typical of trance. Plural, native and advocate of the Detroit style, creates with “Expand And Compres” his usual tribute to this sub-genre. And as an epilogue, The Bleakest Secrets brings “the outro” to the album, “1892” is an environmental drone passage of harmonic variations very appropriate to close this first compilation of Rhod Records.