Premiere: JX-216, Kessell, Joton and HD Substance Contribute To “Life Under Lockdown” V/A on From 0-1

Premiere: JX-216, Kessell, Joton and HD Substance Contribute To “Life Under Lockdown” V/A on From 0-1

We present the latest vinyl 12” record release courtesy of From 0-1: Life Under Lockdown, featuring tracks by Kessell (1/2 of the legendary Spanish duo, Exium), Joton (founder of Newrhythmic Rec.), HD Substance (co-founder of Sub_tl, and teacher at the Bass Valley), and JX-216 (co-founder of From 0-1).

Truth is stranger than fiction they say, 2020 has proven it. This is not the year we asked for, but it’s the year we received. Remarkably, even as clubs and social events across the world shuttered, the spirit of Techno remained alive in living rooms, bedrooms, and basements planet-wide. We hope you still draw inspiration, and excitement in the culture we’ve collectively nurtured for so many years. Before long we will see each other again, hug and kiss one another, and reconnect under more auspicious stars. For now, we wait, and luckily, we have new music for you to pass the time.

Modern, syncopated Techno for the new world, taste of which you can get from our exclusive premiere of JX-216 “Shaping Shadows” below.

Formerly known as Milkplant, JX-216 is a new alias developed by veteran San Francisco Techno DJ/Producer, Justin William Pennell over the last several years. Schooled in the Midwest and developed on the West Coast, his work encompasses well over 30 years of combined DJ/production experience, and over 10 years of record label managment. In 2008 he began the internationally recognized label, From 0-1 with fellow artist Sone.

His newly updated live pa debuted at the 2018 Droid and Blank Code Interface/Scene official Movement Festival event at The Works in Detroit; alongside Kr!z, DJ Hyperactive, Vril, Phase, Sophia Saze, and others. Less than a year into his new alias, he’s already had releases signed to Sleaze Records, BEK Audio, Impact Mechanics, TMM, SUB_tl, Ascetic Ltd., Rheostatus, with several others in the pipeline for 2019.

He has played in various cities across the US, most notably in Detroit for Interface/Scene at Movement Festival 2016, and 2018. His mixes have been featured on Tbilisi based Dark Underground, Sleaze podcast, Drone podcast, and Error Sessions. In early 2018 he launched ‘Konstruct’, a monthly Techno event at Underground SF in San Francisco with fellow artist, Rubidium, showcasing talent from across North America and beyond.

From 0-1 is a West Coast based techno record label led by Justin Pennell (JX-216) and Brian Sonnleitner (Sone) from San Francisco and Seattle with artists scattered across the US West Coast, and around the globe.

Release formats include 12″ vinyl, digital, and CDs. Stylistically From 0-1 provides cutting edge Techno designed for the dance floor, and the head 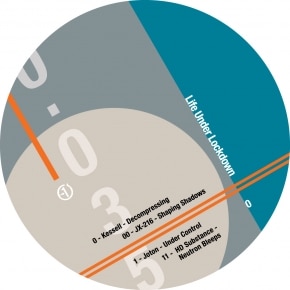