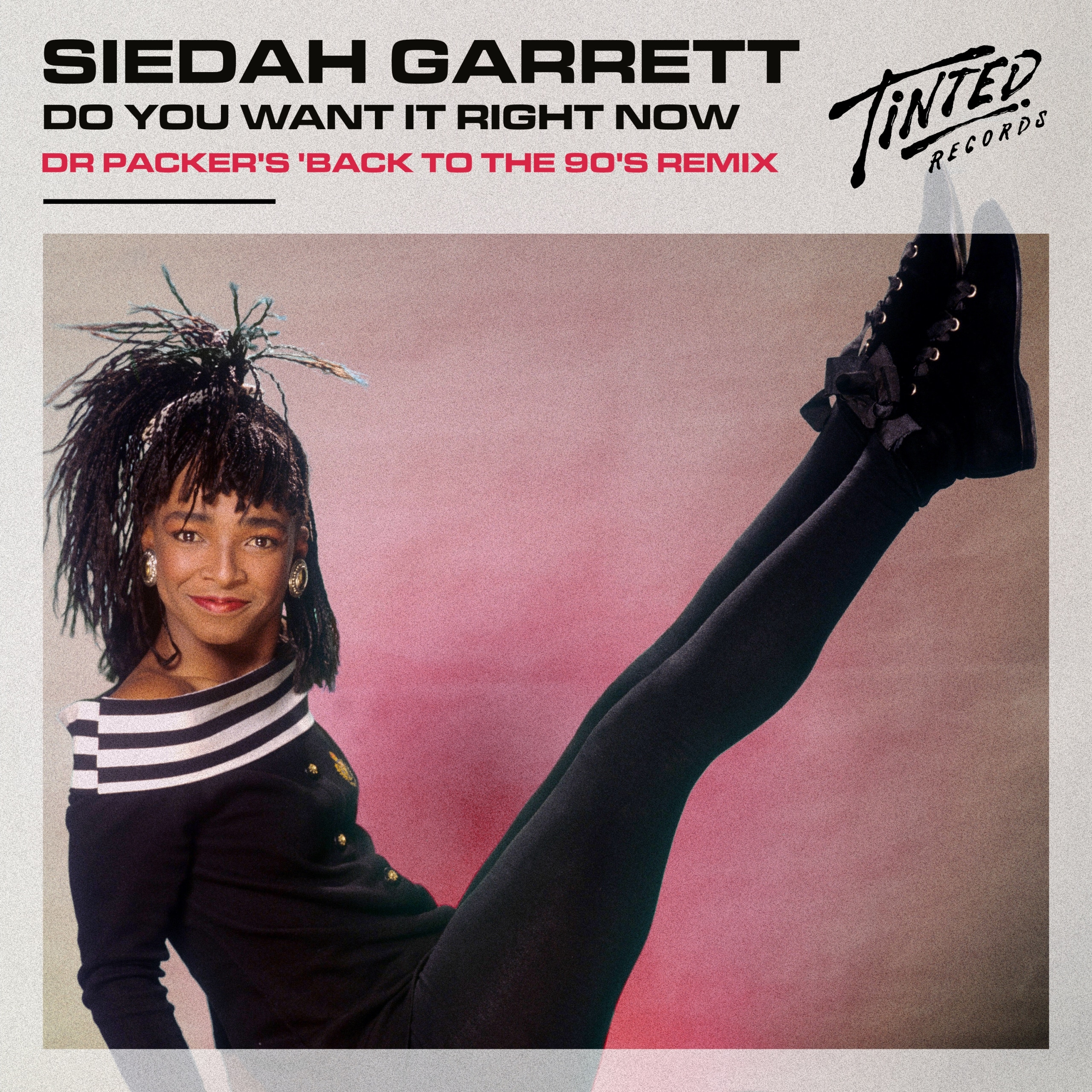 Siedah Garrett is most famous for her songwriting credits on Michael Jackson’s “Man In The Mirror,” as well as a duet on Jackson’s “I Just Can’t Stop Loving You,” in addition to being mentored by Quincy Jones, and providing backing vocals for the likes of Madonna, Donna Summer, Barbara Streisand, and Natalie Cole to name a few.

Grammy-winning and Oscar-nominated ’80s icon Siedah Garrett recently released her seminal classic “Do You Want It Right Now” across streaming platforms for the first time ever. Previously, the song gained worldwide recognition from the soundtrack of the 1985 movie ‘Fast Forward, and today it’s still hailed as one of the pioneering records during the pivot into the ‘Freestyle’ movement in the ‘80s.

Her track “Do You Want It Right Now” is now receiving a disco and funk-fueled remix package from Eden Prince, Dr Packer, Joylon Petch and BluePrint on @tinted-records, and we have the exclusive premiere of Dr Packer’s remix!

A timeless artist known not just for her decades of award-winning singing and songwriting but also for her humanitarian spirit, Siedah Garrett is both a pillar of the music industry and a rare example of kindness in its often-competitive landscape. As the co-creator of Michael Jackson’s mega-hit “Man in the Mirror,” she became famous as a young singer/songwriter bursting with creativity and compassion. Now amidst a changing world and a new generation, Siedah has never stopped using her gifts to make the world a better place while being recognized as one of the greatest vocal talents of our time. Even after winning a GRAMMY and being nominated twice for Academy Awards, Siedah Garrett still believes her greatest accomplishment is the lives she’s changed for the better—both with her music and her many acts of charity and service.

A native of Los Angeles, Garrett began working as a background vocalist when she was just 15 years old. Starting off as a singer in a variety of local bands in her early days, she was discovered by Quincy Jones, and was signed to his label as an artist and songwriter. She was soon catapulted to the status of one of the most sought-after lyricists in the world after she co-wrote “Man in the Mirror” for Michael Jackson’s chart-topping Bad album, and recorded as his duet partner on “I Just Can’t Stop Loving You” (that album’s first single). She also co-wrote “Keep the Faith” with Jackson for his Dangerous album and toured with him as a featured and background vocalist on his Dangerous World Tour.Throughout the eighties, nineties, and 2000s Siedah Garrett sang and wrote constantly alongside stars from every corner of the entertainment industry. Artists who have recorded on her songs include mentor Quincy Jones, Common, Aretha Franklin, Miles Davis, Earth Wind & Fire, Jamie Foxx, Jennifer Hudson, will.i.am, Ray Charles, Sarah Vaughn, Ella Fitzgerald, Toto, Sheena Easton, Natalie Cole, Barry White, The Pointer Sisters, Donna Summer, Dionne Warwick, Patti Austin, Roberta Flack, Al Jarreau, Sergio Mendes and many others. Siedah resides in Los Angeles to this day and is married to former RCA Records VP/A&R, Erik Nuri, who also serves as her talent manager.

As a recording artist, Siedah Garrett’s first big hit was the now classic duet with ex- Temptation Dennis Edwards, “Don’t Look Any Further” in 1984. Following her early recording successes, she toured internationally with MJ, Quincy, Madonna, Sergio Mendes, Wang Chung, and The Brand New Heavies. Siedah’s music has been extremely popular among film and television productions as well and was featured in Love Jones, The Lego Batman Movie, Rio, Rio 2, Dreamgirls, Batman, Lean On Me, Fast Forward, Baby Boom, the Sharon Stone-produced documentary Femme: Women Healing The World, the award- winning film One Little Finger, the Spike Lee film, Da Sweet Blood of Jesus, The Voice, Netflix’s Fuller House, and the hugely successful Playstation video game Nioh. Her success in music lead to her being named a regular guest host of Casey Kasem’s America’s Top Ten, along with a few standout acting roles in hit tv series including Facts of Life and Amen. Siedah Garrett is also a member of the Academy of Motion Pictures Arts & Sciences – Music Branch/Executive Committee and a rotating member of the Board of Governors of the Recording Academy’s Los Angeles Chapter. She has served as in-studio vocal producer for American Idol and worked as voiceover talent for Toyota of Southern California for over 16 years.

In 2011, Siedah was diagnosed with relapsing-remitting Multiple Sclerosis (MS). Siedah graciously donates her time and talents on behalf of Race To Erase MS, including live performances at its annual galas, singing the National Anthem at it’s We Run The Grove half-marathon, and recording and releasing her benefit single, “Carry On,” with 100% of the proceeds donated to the charity.

In 2017, Siedah Garrett released her critically acclaimed single “G.H.E.T.T.O.” (Greatness Happens Even Though There’s Oppression), which featured GRAMMY and Academy Award-winning rapper/ actor/activist Common. The single, which is a motivational anthem about not being defined by where you come from, premiered in Essence magazine online. In 2019 Siedah partnered with Academy Award-nominated composer John Debney to create songs for a musical theater holiday production entitled “My Silent Night,” and is now collaborating with multi-GRAMMY winning composer/producer Harvey Mason, Jr. on the musical theater production of Will Smith’s blockbuster film, “The Pursuit of Happyness.” She also has signed on as featured songwriter for the 4th and final season of the hit Netflix series, “Dear White People.”

Outside of her work as a singer and songwriter, Garrett is still an active philanthropist using her time, talents, and creativity to make a positive difference in her community and throughout the world. Siedah is a frequent guest speaker at colleges, universities, and industry conferences, offering her advice and sharing her experiences. She has become a go-to lyricist for special events and social causes, such as co-writing two theme songs for the Special Olympics World Games, the musical theme for the World Expo in Shanghai, the American Idol Gives Back campaign, Fergie’s “L.O.V.E. (Let One Voice Emerge)” song to encourage voter participation, the Autism Speaks theme song “It’s Time to Listen,” and the benefit single, “Carry On,” for the Race to Erase MS charity. Siedah also has taken an interest in causes related to HIV/AIDS, earning her the Good Samaritan Award from the Minority AIDS Foundation. An avid knitter and crocheter, Siedah is currently working on an initiative she calls Beanies for Babies – personally knitting 100 caps for children living with HIV/AIDS and cancer.

In the soon-to-be-historic summer of 2020, Garrett has released a new, thought-provoking single, “The New Frontier (Say Their Names),” in tribute to George Floyd and all other African-American men, women and children who have been murdered by the police (with all proceeds being donated to the Black Lives Matter organization). As Siedah explains, “I was inspired to write this song to help bring awareness to this very serious issue of police use of excessive force, and the minimizing of the lives of black people in this country. After viewing the footage of the brutal murder of George Floyd, and hearing the reports of the killing of Breonna Taylor, I, like many other Americans, knew I had to speak out in my own way. I had originally written a draft of this song after the deaths of Trayvon Martin and Freddie Gray, but it had never been publicly released. And now, after George Floyd, Breonna Taylor, David McAtee, and all of the others, I knew the song, with its message of hope and promise, had to be released.” Despite decades of tireless work to create some of the most touching music of our lifetimes and give back in a multitude of other ways, it’s clear that Siedah Garrett is nowhere near done. As the rawness and power of her most recent live performance of “The New Frontier” at Agape International shows, the fire inside her is burning as brightly as ever.

Dr Packer is an alias of West Australian Drum & Bass DJ/Producer ‘Greg Packer’ set up for Remixes & Edits of mainly retro music such as ’70s, ’80s, ’90s Soul, Disco, Funk, Hip Hop & Reggae. Greg although known more for ‘Liquid Drum & Bass’ regularly plays sets of ‘Old School Funk, Disco, Hip Hop Etc, purchasing his first record in 1982 at the age of 10 which was the iconic “The Message” from Grandmaster Flash.