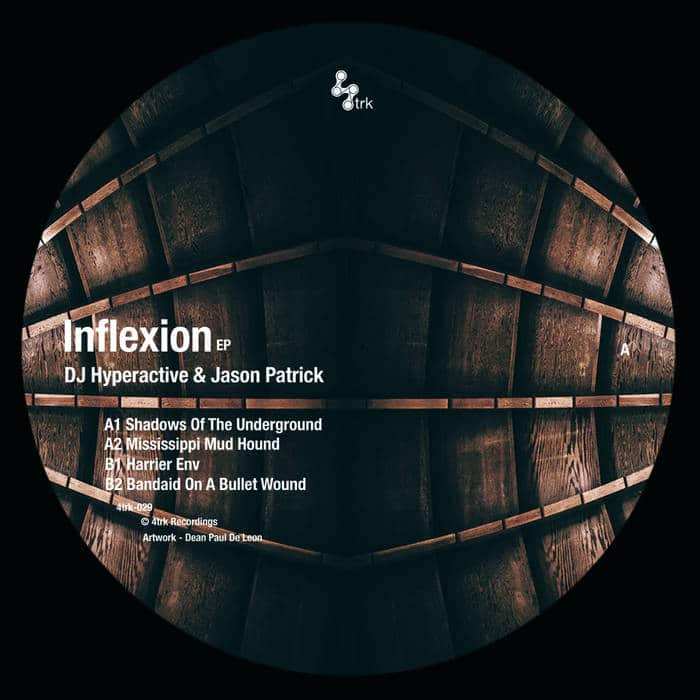 The release kicks off with “Shadows Of The Underground” a stripped-down acid Techno track that builds in a mutating fashion with its 808 cymbals, filtering shakers, and pitch-bent synth stabs. “Mississippi Mud Hound” gets underway with a growling bassline that morphs throughout alongside additional synth elements and percussion bits.

On the B side, “Harrier Env” provides a jacking feel that manages to also have a stutter step bass groove in conjunction with 909 percussions, a spacey drone, and a mysterious melody. Closing out the release is “Bandaid On A Bullet Wound,” an atmospheric stripped-down track with powerful bass, sci-fi bleeps, and a lead synth riff that pushes and pulls in intensity throughout the track.

Those versed in the history of techno need little introduction to DJ Hyperactive as an artist. His Resident Advisor bio describes him as one of Daft Punk’s “Teachers” and “brother of the humble,” his contributions and impact to the underground spanning three decades now and leaving a legacy that has not only helped shape techno in Chicago and the Midwest, but the entire United States and beyond. Growing up in Chicago in the early ’90s, DJ Hyperactive honed his skills as both a producer and DJ, receiving instant international recognition and subsequent touring gigs at some of the most recognized and revered venues and events of the last 20-plus years, including Orbit in Leeds, Liquid Room in Tokyo, Berlin’s iconic Love Parade, the game-changing Interface parties spearheaded by Droid Behavior in Los Angeles, Movement Detroit festival in the birth place of techno, Output in Brooklyn, techno meccas in Berlin such as Tresor and Berghain and of course at Smartbar, Spybar and Primary right in his home city of Chicago.

Over the course of his career he has churned out well over 100 remixes and original tracks, his catalogue including such instant classics as “Venus” and “Wide Open” on Missile, “25HRs” on Droid Recordings, “Music Box’ on his own imprint 4 Track Recordings, and more on imprints the likes of Contact, Truncate, Figure, Blank Code, Impact Mechanics, Nachstrom Schallplatten, and CLR, just to name a few. After a warming stint in Southern California, DJ Hyperactive returned to Chicago 2013 to reconnect with his family and musical roots. His story continues with more gigs and more studio productions, with the difference being the experience and perspective that only a true veteran can possess.

Originally from Detroit and currently based in Chicago, Jason has established himself as a dj, producer, and label manager of Klectik Records. Firmly established on the front line of Techno in the Windy City, Jason plays at many of the top clubs including his residency at Spybar, where he is regularly featured and has provided direct support for top international guests. A sound dj for over 15 years, Jason has played gigs in NYC, Italy, Miami, Philadelphia, San Francisco, and in Berlin at Tresor, Chalet, and Sisyphos. In June of 2010 Patrick was tabbed by the one and only Jeff Mills to open for his Axis Records Presents Something In The Sky event in Detroit.

The type of sound you can expect to hear in his sets is a moody hypnotic techno vibe, rich in the classic Detroit spirit. As a producer, Jason has released on Kevin Saunderson’s iconic KMS Records, Gynoid Audio, Northern Parallels, and Impact Mechanics. His tracks have been played by DJ’s such as Richie Hawtin, Scuba, and Julia Govor. Together with friend and Klectik artist Pat King, a new label, Estetika was launched in early 2018 with a streamlined Techno focus.