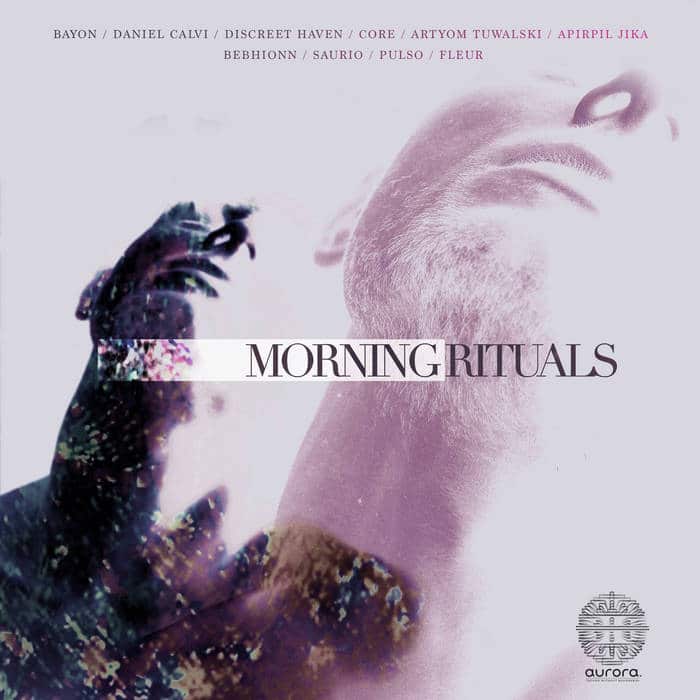 Pan-European techno label aurora. is proud to serve up the first in a series of contemplative compilations entitled Morning Rituals Vol. 1. Featuring exciting and avant garde artists like Core, Suario, Daniel Calvi, Fleur and more across 11 superb tracks, it is music to be heard during the calm of the early morning, or during moments of deep thought and solitude.

This collection follows on from a debut compilation compiled by label co-founder Mattia Prete that presented eight tracks from eight artists in eight different European countries. It has been put together with meditation and audio therapy in mind, but could also immerse you in lush sound on a huge festival sound system, or be used to layer up atmosphere by adventurous DJs who play across more than two decks.

Berlin based experimental sound researcher Bayon opens up with ‘Cosa Sei’, a scintillating ambient track with deep and moody chords as well as more bright and thin synth motifs up top. It’s melancholic and moving and is followed by Daniel Calvi, who serves up the dark, heavy, slow motion rhythms of ‘Anemos’ with its paranoid vocal whispers and eerie found sounds. Then it’s French born Berlin based Discreet Haven’s ‘Futakuchi Onna’ which ups the ante with a hypnotic techno rhythm overlaid with watery sound effects and ticking hits. Core offers the title track ‘Morning Ritual’ and takes you on a serene trip into widescreen deep techno that sooth your mind, body and soul. ‘Teardown’ from Artyom Tuwalski is a busier track with modulated synths raining down the face as booming kicks and bass make for a cavernous bottom end in which to get lost.

Depot6 Records associate Apirpil Jika goes for a euphoric vibe with dreamy breakbeats and cloud-like chords that suspend you in mid air amongst echoing voices. There is a distinctly Millsian vibe to bass obsessive Bebhionn’s ‘Universal Gravitation’, with its sonar like pulses, rubbery drums and bass and uneasy sense of tension. Saurio’s ‘Amanecer’ is a drowsy offering of sleepy techno that makes your mind wander off into a dream state and Pulso’s ‘No Confidence Movement’ disappears deep down a techno wormhole where only alien life forms exist. Fleur closes things down in style with ‘Eruption,’ a detached vocal cut that drifts on sparse, broken kick drums as the heavenly voice brings real pain and emotion.

This is a tasteful collection of high class, pensive techno.

Listen to the exclusive premiere of “Teardown” from Artyom Tuwalski below:

WHO
aurora. is a techno record label founded by a group of artists in Europe in the beginning of 2020, as sign of a love for a genre that represents, from its beginning a ritualistic form of body music. Techno music it became a cult and an ideal built from liberation and unification between people around the globe. A strong message of resistance and resilience that during the time, found new forms and new contamination, keeping an identity but evolving because of different roots of different landscapes, mentality, points of view. This futuristic genre of music brings the listener in a parallel dimension, where the repetition shows the essence of the hypnosis.

WHAT
In Roman mythology, Aurora was a goddess who had the power to renew herself day after day and sailed the sky to announce the arrival of the morning. She brought energy and vitality. Aurora likes new adventures, new emotions and always discovering new things and feelings.

HOW
Our team of experts A&Rs and engineers are focused on the continuous research of music that fits best with the idea of the label. keeping apart every kind of judgment if not for an objective quality of the sound.
Every release will be cataloged through different releases, giving voice, for the first time, to country’s or city’s techno scene, promoter of parties, musical style.

WHY TO CATALOG?
Making connections between the techno world artists is the main purpose of this ambitious project:

It helps to identify the artists in the corresponding area, in order to promote and to create bridges between them, a strong chain of talented artists that, united, create connections sharing the love for techno music.

Every country, region or city has different backgrounds and influences: to make it more understandable and to analyze the direction of a city-sound, aurora. promotes, without any kind borders and musical discrimination, its best sound. An artist of a crew of artists is established in precise areas, to discover new sound and techno music.

Nowadays, it’s always more difficult to identify which kind of techno a listener is hearing.

Furthermore, people who are approaching for the first time in this genre are often confused by the quantity of music proposed in the industry and, most of the time, the easiest way to nominate the electronic music productions is “techno”. Just to identify some: Groovy, melodic, Detroit-oriented style, ambient, electro, will be finally cataloged to catch the attention of the people that have a preference for precise style.

Morning Rituals Vol. 1 is available on the aurora. Bandcamp HERE