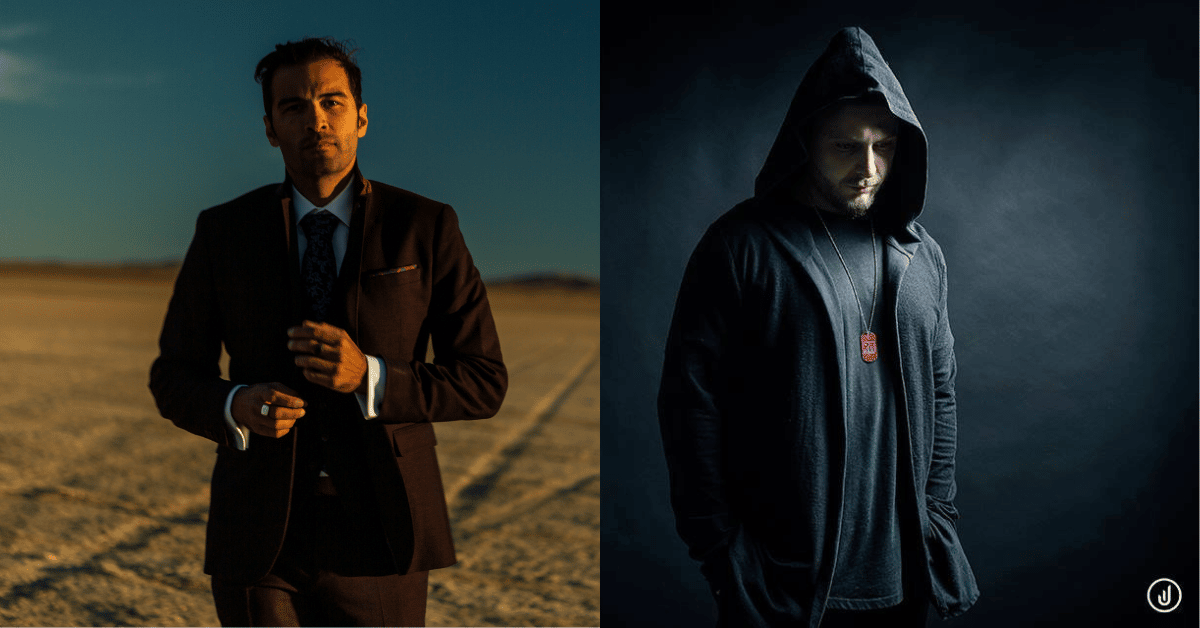 Canadian powerhouse Atroxx is at the forefront of a new generation of techno artists enriching the genre with fresh energy and ideas. Equipped with deep musical knowledge, an obsessive approach to production and an innately progressive mindset he has earned himself a formidable reputation as a producer. With releases on an array of respected underground labels, including his own Starskream, Atroxx is respected and admired across the techno world, courting favor with both his peers and more established heads.

Atroxx’s newest EP, which just recently premiered on 6AM, includes a collaboration with Kraftek label boss, Pleasurekraft. Pleasurekraft’s signature “cosmic techno” sound, attempts to encapsulate the power & beauty of the cosmos within the confines of techno music, while thematically yearning toward a greater understanding of the universe and our humble place within it.

Both artist’s sit down and talk to 6AM about their collaboration project and their respective artist journey and future plans.

Hi Atroxx and Pleasurekraft! Thanks for taking time for 6AM, how has 2022 been treating you so far? Any highlights of the year now that shows are back?

Atroxx: It’s really nice to start traveling again, showcasing the world that I’ve held onto in the past years. Montreal, or Quebec I should say was on a heavy lock down, extreme restrictions that worried me about the survival of some clubs in my hometown. One highlight for sure is knowing that they have survived and pushed through. Other things I’m extremely excited for is of course my coming collab with Pleasurekraft and some projects and shows announced that will soon shed light.

Pleasurekraft: It’s been a treat to get back on the road again and play new music for the fans. I hope the worst of the pandemic is behind us – and you can just feel the enthusiasm people have to get to go to live events and shows again. Ikarus festival in Germany was a treat – and I’m looking forward to playing the main stage at Loveland this year – as well as a certain Los Angeles show which I reckon I probably can’t talk too much about just yet! :)

Pleasurekraft: I’ve been a big fan of Gino’s (Atroxx) for some time now. I remember first passing on a demo he sent me a long time ago for a track of his called “1965”. About a month afterwards I received the same track in a promo from another label – but for a variety of reasons that change our perspective at a given time – I immediately emailed him and asked why he never sent me the track because I loved it so much. To this he did what any sane person with good evidence on their side would do – sent me back a screenshot of my email saying I wasn’t interested in signing the track. Fast forward I think 4 years now – and I don’t think I have played a single set in that time that has not included the track. To date it is the #1 track I most regret having missed the opportunity to sign. Needless to say, since then I’ve kept in touch with Atroxx to make sure he regularly sends over his new stuff. Anyway, I had been sitting on a vocal sample for a while that didn’t quite fit the cosmic techno stuff we were doing so I pitched the idea of a collab to Gino – essentially if he wanted to use it for a new track – the caveat being that it had to be signed to Kraftek (obviously). When he sent over the initial draft version – I loved the drums (as I usually do on all his records) – but felt they needed a bit of simplifying – and his groove I felt was ripe for a proper hook – the defining feature of most pleasurekraft tracks as I’m sure fans know by now. Anyway – worked on the hook and dropped it into his groove and it all came together in a way that didn’t feel forced – and I’m really quite happy with it. It’s a bit different for both Atroxx and I – I think – but that’s part of the track’s appeal too.

Atroxx: Just like Kaveh [Pleasurekraft] said, but rather I was honored and very nervous to show him. I literally got working on it 20 minutes after we spoke. Phone off, all distractions aside and went at it. The amount of inspiration I got from speaking with him was enough for me to complete an album haha. I was really in a good mood. Hearing the final version, I was extremely pleased with the result and love the fact that you can hear both of our worlds come together. I love having a home for my music on Kraftek and have always appreciated that Kaveh allowed me to have my signature sound on his imprint.

Both of you obviously have experience with collaborating, what are some challenges of any collab that you encounter?

Atroxx: I’m very picky with who I collaborate with, because often either they aren’t as ambitious as you and it takes forever to get done, which gives me anxiety or they just want to slap their name on your work. The one’s I do choose to work with are people I respect, trust and believe are just ambition as I am.

Pleasurekraft: Well anytime you have creative people who come together to make something you’re going to have creative differences – and I think sometimes when people fall in love with something they’ve done – it becomes really difficult, sometimes impossible, to convince them that that element won’t work in a given track. I’ve been on both ends of this dilemma, neither side is pleasant, but one always hopes that the collabs give life to projects that are more than the sum of their parts. Whether we’ve adequately achieved that will be decided in the court of public opinion – i.e. the dancefloor.

Did you learn anything new about each other’s artistic process during this project?

Atroxx: Kaveh and I had a zoom call on one of the tracks, it’s astonishing how quickly he can point out anything in the mix or layout, effortlessly. He was pointing out things from placements to arrangements in seconds at its exact locations. I was really impressed, but of course this is Pleasurekraft we are talking about and the respect has been earned long ago.

“The one’s I do choose to work with are people I respect, trust and believe are just ambition as I am.”

Pleasurekraft, your label Kraftek has the signature cosmic techno sound- has the pandemic influenced or inspired any evolution in the label’s overall sound?

It has inspired me to be even pickier with the tracks I sign because there are now so many artists and labels releasing tracks that have that “cosmic techno” sound – and while it’s incredible to see how much the subgenre has resonated with fans and producers alike – it has also led to an inevitable gluttony of tracks that start to sound very similar to one another. It has also led to me wanting to push what pleasurekraft is about not only as far as other genres of music go – “Umbilicis Universalis” being a good example, but also to redefine our own space within the cosmic techno subgenre, with a track like “Ritual” for instance – not to mention the several other techno tracks that won’t be out for some time but fans will hear at shows this summer.

“For me, the Cosmos is an endless source of inspiration – and I saw no reason why it wasn’t possible to combine that passion into an atmospheric and cinematic expression dressed in techno garb.”

Pleasurekraft on the cosmic techno sound

Pleasurekraft, what was the initial inspiration for creating the cosmic techno sound?

I think music is too holy a medium to be purely hedonistic. There is nothing wrong with bangers and hands in the air and fist-pump moments etc, but to me I just wanted more. Thinking about the legacy of what Pleasurekraft would stand for inspired me to try and sneak in a lot of the not only musical but philosophical influences I’ve had growing up.

I remember as a kid going and buying CDs from my favorite artists and pouring over the liner notes, and reading the lyrics, seeing who they thanked, etc etc. And sometimes there’d be some reference to some non-musician who had some influence in the making of an album and I’d go and discover all I could about who was influencing the artists that I loved. Similarly, I wanted to include ideas from some of the thinkers that have had monumental impacts on my life and music – and even though most fans don’t pay all that much attention to those kinds of details – when you read the comments on youtube or instagram or wherever and there are those fans that just “get” what you were trying to do – it makes the whole process so much more rewarding. The video I made for “Panopticon” is a good example of this.

For me, the Cosmos is an endless source of inspiration – and I saw no reason why it wasn’t possible to combine that passion into an atmospheric and cinematic expression dressed in techno garb. But now that the sub-genre has blown up – I’m really excited for fans to hear the newest stuff because I think I have a lot more to still say, musically speaking, – and I hope it inspires other producers to push the boundaries of the subgenre away from the cookie-cutter mould much of it has succumbed to.

Atroxx, on the second track of the EP you also worked with the vocalist Jessica Zese, do you often work with her? And what inspired you to use her vocals on this particular track?

She is not only a very close friend of mine, girlfriend of one of my best friends but also the lead vocalist and other half of Melora, a synthwave meets house prog project. Inspiration was very easy, she’s my favorite vocalist other than my father. As far as custom vocals go for my music, if it’s not me, it’s Jess.

Atroxx, was it purposeful to put these two pieces together because they were collaboration works, or is there another underlying theme between the two tracks?

I often like to pair my EP’s with a stomper and more melodic tracks so in this case they both worked hand in hand.

“Hearing the final version, I was extremely pleased with the result and love the fact that you can hear both of our worlds come together. I love having a home for my music on Kraftek and have always appreciated that Kaveh allowed me to have my signature sound on his imprint.”

Atroxx on the EP creation

Thanks so much for both of your time, is there anything else you’d like to share with us and the 6AM community?

Atroxx: Just to say that I can’t wait to be back, as well as keep an eye on 6AM’s Artist Map as big news is coming ;) Keep it Relentless

Pleasurekraft: Looking forward to being back in LA with the 6am fam very soon! (along with a proper dinner at Osteria Mozza)! – couldn’t help it, sorry, I always have to plug my fav restaurant haha

Read Next: May The (Techno) Force Be With You