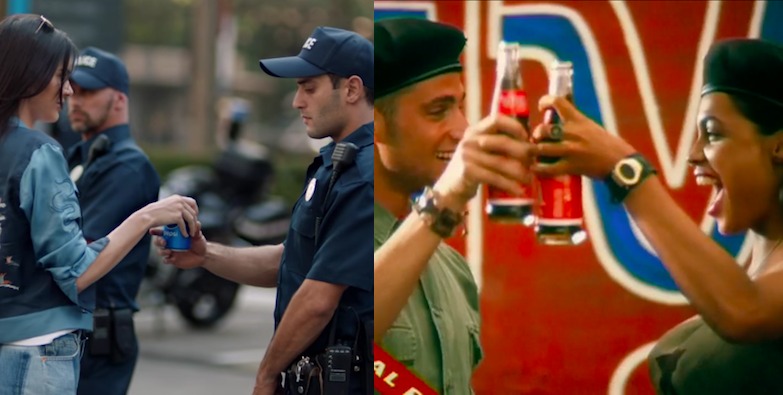 In case you missed it, Pepsi made a 2-minute 39-second ad featuring Kendall Jenner giving a can of Pepsi to a policeman during a protest rally. In the commercial, the policeman accepts the can to the cheers of the protesters and the “fighting/protest” ends.

Since its release, the video has since been dragged and tarred through social media: Wired.com says, “The message is clear: All those Women’s Marches, Black Lives Matter protests, and demonstrations outside Trump Tower would be much more effervescent—and effective!—if someone had just brought some soda.” Slate.com, on the other hand, posed an interesting question: “Is it Pepsi’s view that the act of handing an armed police officer a can of soda should be the millennial generation’s version of putting a daisy in a rifle barrel?” NBC News on the other hand reported that “Pepsi was trying to project a global message of unity, peace, and understanding.”

But what caught the attention of dance music fans such as ourselves, was how similar this Pepsi ad was to a Chemical Brothers video from 1999.

The video was shot back in 1999 in Mexico and was directed by W.I.Z. It was titled “Out of Control” and starred Rosario Dawson and Michael Brown. The Chemical Brother’s video shows Dawson making peace with the police force by provocatively showing them how she drinks her cola while Brown and others use the cola bottle to make Molotov cocktails. Then the viewers are shown that the standoff was only a commercial for Viva Cola.

Marvel actress Dawson is one of many on the internet calling out Pepsi for making such a thoughtless ad. The Fader interviewed director W.I.Z. and he stated that he got his inspiration for the video from a line in Clash’s “White Man (In Hammersmith Palais)”: “Huh, you think it’s funny turning rebellion into money.” He adds that, “If you were ever in doubt about the carnivorous nature of advertising, then this Pepsi ‘spot’ says it all. It so insults everyone’s intelligence that it’s disturbing, what is this culture that we choose to live in that engenders such naked cynicism, is advertising the pornography of capitalism? Vanillarizing our expressions of outrage, cashing in on the very frustrations that this system creates.”

Eerily reminiscent of Chemical Brothers"Out Of Control"vid we shot in Mexico City ~15 yrs ago sadly minus the point: https://t.co/LTI9mJ7zjS https://t.co/DqBjKdQylS

Newshub reported that the Chemical Brothers video was “intended as a commentary on American advertising culture; a satire of exactly the sort of ad Pepsi made with Jenner several years later.” It is interesting seeing Pepsi’s slogan in the controversial ad was “Live bolder. Live louder. Live for now.” While Viva Cola’s slogan in the Chemical Brothers video was “In the heat of the moment.” It is another similarity seen between the two videos. Pepsi has released no statement about the claims of copying the Chemical Brothers video and since they pulled their commercial this might signal their unwillingness to discuss it further, especially due to the controversy surrounding the video in the first place.

@BerniceKing We at Pepsi believe in the legacy of Dr. King & meant absolutely no disrespect to him & others who fight for justice. pic.twitter.com/rM8W8i0Euu