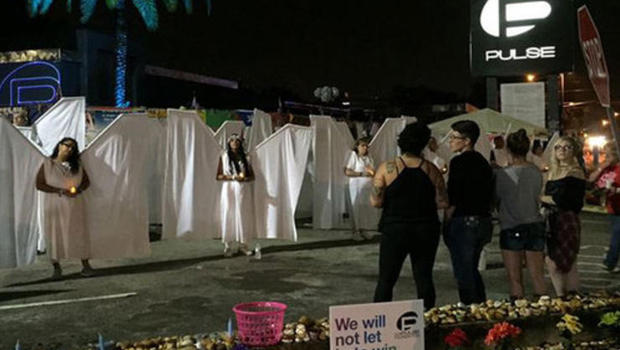 Today, a year to the day since the tragic Pulse Nightclub shooting that left 49 people dead and wounded 58 others, the city of Orlando honors the victims and families of those that were affected by the hate crime that shocked the entire nation.

In the early hours of June 12th, the same time when the shooting occurred in last year, supporters held a vigil outside of the Florida nightclub, with 49 people dressed as angels paying tribute to the victims as the names of those that were lost that night were read out loud.

Despite the event being closed to the media you can see pictures from the emotional tribute via Twitter below.

Orlando continues to celebrate the life of the victims today with a midday ceremony with speakers followed by a nighttime ceremony focusing on music. A digital gallery of artwork was announced today by The Orange County History Center, set up set up throughout the city to remember those who lost their lives during the attack.

Florida continues to remember the victims with a number of initiatives spearheaded by the state’s Governor Rick Scott, who visited the club today and also ordered the state’s flags to be flown at half-mast in remembrance of the victims. Church bells rang 49 times at noon in Orlando today and a rainbow flag was unveiled at the Orange County government building.

Other cities paid tribute to the victims. Washington D.C. Mayor Muriel Bowster proclaimed today as Orlando United Day. 29 survivors were invited by Boston to ride on a float during their Pride parade yesterday.

President Donald Trump acknowledged the attack and the victims in a tweet today:

We will NEVER FORGET the victims who lost their lives one year ago today in the horrific #PulseNightClub shooting. #OrlandoUnitedDay pic.twitter.com/OFFUVAFBJM

See more pictures and videos from the event via the tweets below:

A group of angels lead the way into Pulse Nightclub #PulseOneYearLater @CBS12 pic.twitter.com/D6pIVODRXp

As the sun rises outside Pulse, people continue to come by & pay their respects exactly one year since attack. pic.twitter.com/NT6NZw8lPJ

Pulse owner Barbara Poma: “I miss Pulse. I miss everything it stood for…It breaks my heart that your sanctuary was taken from you.” pic.twitter.com/XEKEvC8Yvh