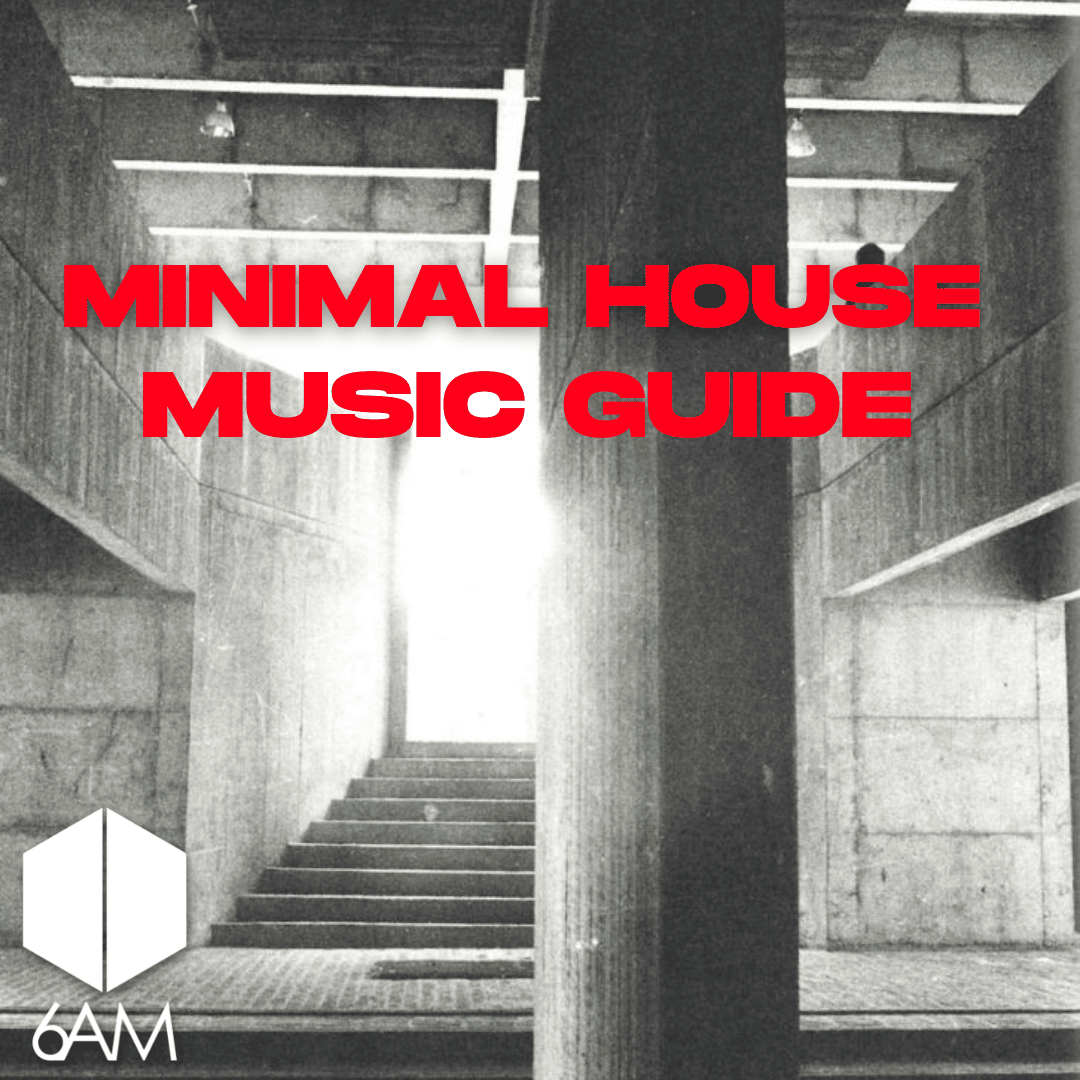 Minimal house is a subgenre of house music that has been around for decades with an occult like following from all around the world. Explaining the genre however is tough to nail down. With popular tracks combining elements from electro, garage, IDM, and early Detroit techno. We go in-depth here at 6AM on some history, artists, and tracks that represent that minimal sound.

What is Minimal House?

Minimal house music refers to a style of 4 on the floor dance music that features an emphasis on less is more. The tracks typically have less elements and focus more on quality the of sounds, where the sounds sits in space, and a gradual subtle progression that hypnotizes the listener. Sometimes also referred to as micro house, the vibe and feel of has funky swung bass lines, hard panned effects, meshing with loopy 80s style spacey synth leads, sci-fi pads , and minimal clean (707, 808, 909) drum progressions push the tracks along and bring it all together.

Minimal house and minimal techno come from the same world however possess some distinct differences. Minimal techno will contain harsher, more brute sounds. Think of metal on metal, with droning atmospheres and deep bass that push the tracks along with developing percussion, usually with the techno signature off beat hat thats right on time. Minimal house will be groovier, containing more swing within the bass lines and percussion elements. Typically slower in BPM minimal house typically sticks between 115-130 while minimal techno can go up to the 145 range.

The listener is left in a state of futuristic, hypnotic bliss on the dance floor which keeps them coming back for more. Other styles of minimal house possess similar framework with the idea of limited elements in a track that all have room to breathe and develop over time. Fx’s such reverb and delay help with variation and change throughout these tracks aiding in creating tension and release. Whether deep(funky/soulful), organic, ethnic, or tribal style instrumentation and percussion is being used the minimal foundation can be seen across many other styles of 4×4 based music.

What BPM is Minimal House?

Minimal house music can rage from anywhere 110-to around 130 BPM depending on exactly what flavor of minimal house music you are attempting to emulate. Some deeper styles of minimal house are on the lower end of that spectrum, still accomplishing the same intoxicating trance like experience in more of a meditative journey style. At the higher end the feel of the tracks could start to have more of a techno feel.  Somewhere in the middle the minimal, housey, more groovy tracks come in. Minimal Detroit style techno features more repetitive shorter loops and 909 style percussion, with a mix of more industrial sounding sound design but can fall into the same BPM range.

What is Dark Minimal House?

Dark minimal house is a specific style of house music. Typically in the 120-125 BPM range while branding a sinister, horror movie score style feel with deep slightly distorted, anxious bass lines, pitched down vocals with heavy effects, and repetitive techno style percussion loops. European labels such as La Nota Del Diablo and My Own Jupiter. Djs such as Nicolas Lutz and Quest almost primarily this sound in their sets.

From around  the 1:41 mark  forward you start the hear the dissonant horror like synth string pads, the minimal drums (kick, snare, closed hat) mixed with a whip like sound effect is used like a repeating percussive element, and a deep pitched vocal snippet that is being panned left and right. As the track progresses an eerie synth lead comes with a deep thick sounding synth bass. The dark sound paints the picture of 1980 horror films mixed with house music.

In this Nicolas Lutz set (at the 17:43 mark) another good example of a dark minimal house track. Minimal style drum machine samples are progressing the track over a simple thick bass line over and over until a gradually detuned hypnotic synth line creeps in during the break down to set the sinister type feel this style of house is known for.

What is Deep Minimal House?

Deep minimal house refers to a style of house music that features tempos ranging from 115 to 125 bpm, muted bass lines, spacious use of percussion elements usually featuring the sound from the famous Roland drum machines, soft easy listening ambient pads that guide you through the cosmos, advanced chord structures bringing more emotion, and soulful vocals (sometimes uplifting or melancholic). Imagine the essence of jazz-funk and soul music mixed with Chicago style house and you’ll land in the deep minimal world. Larry Heard, Marshall Jefferson, Frankie Knuckles, and Ron Hardy are a few of the key people involved in growing this sound.

Larry Heard’s “Sceneries Not Songs Volume 1” is a great example of how these deep tracks take you out of body and paint a picture for the mind. Clean, snappy percussion mixed with dream like pads, organ stabs, easy listening melodies, and the groovy bass lines has the listener in a happy euphoric state.

One of the most famous deep minimal house tracks is “The Whistle Song” by Frankie Knuckles. Releasing in 1991, the track features a playful flute melody, a supporting whistle sounding chorus section, choppy short chords that play off the repetitive round bass line, all supported by Juno-6 pads that create the cloud like atmosphere. The signature positive, uplifting, buoyant sound is present throughout.

This Ron Hardy set is a good example of where the sound started in the early/ mid 1980s. (heck the video from 6:30 on and you’ll hear simple percussion from an early drum machine, mixed with choppy groove chords, live bongos, and a disco style bass line progress with futuristic sound effects and vocal snippets to create a simple yet effective track.

Other Styles of Minimal House:

In this Dennis Cruz track, the main element developing the track is a woman singing in the native tongue. The beat is processed a little more than the other styles, however the percussion is used the same way. Throughout the track you can hear drum samples from live drums mixed with more drum machine style sounds to create a more natural less electronic feel. This is style of music is something you’d hear on a beach in Ibiza or Tulum.

The Hraach remix of this David Hohme track has the minimal aspects that are brought in and out to periodically sometimes with different levels of effects to fill in space when other elements are taken out. Realistic sounding percussion mixed and layered with drum machine sounds create a holistic style feeling and the heavy reverb and delay on the lead and vocal place you in an airy, ethereal world.

The minimal house scene within the dance music community has always been a major pillar and continues to hold together the underground lovers and purists, the true music lovers. The people that are there for the relationships and family aspect that is created by these producers and Djs. They continue to play and add to the sounds that were originally used to pioneer and create the dance music scene we have all grown to love. The minimal scenes are known for their cult like followings, showing no sings of slowing down especially with a younger generation growing the sound. Stick with us at 6AM for new music, features, and events within the global dance community.