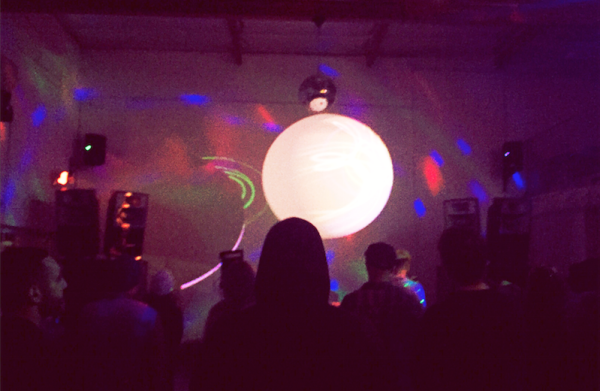 Remember that one scene in Fear and Loathing in Las Vegas where Hunter S. Thompson goes on a monologue about his heyday during the 1965 San Francisco acid wave to Jefferson Airplane’s Somebody To Love playing in the background, and a sea of hippies are dancing in slow-mo under a huge disco ball? That’s basically how Acid Camp Volume 7 went down, except substitute Jefferson Airplane with three hours of Mike Servito’s mad rad acid house.

Acid Camp resident Aaron Davis started off the night by situating the influx of Sunday dance buggers at LA Mother with his opening set, with Matt Damon (Matt McDermott and Damon “Magic Touch” Palermo) taking warm-up duties to the next tier. Brooklyn’s Mutual Dreaming visionary Aurora Halal made a special guest appearance after playing Fine Time the previous night at a loft in downtown LA alongside Ital, Damon Palermo, and Earthen Sea.

Taking command of the decks at about the 9PM mark, Mike Servito served it sweet with a side of filth. That is, filthy good. The Bunker’s resident DJ is rightly named so for his ability to switch between fun and serious vibes during his set, in turn covering a broad scope of sounds that are playfully danceable through and through. The sounds stay clean, but the vibes get down and dirty once in a while.

Acid Camp is a fun party for sure, casual and intimate. There was always room to groove, and there’s always someone getting funky with those Funktion-Ones.